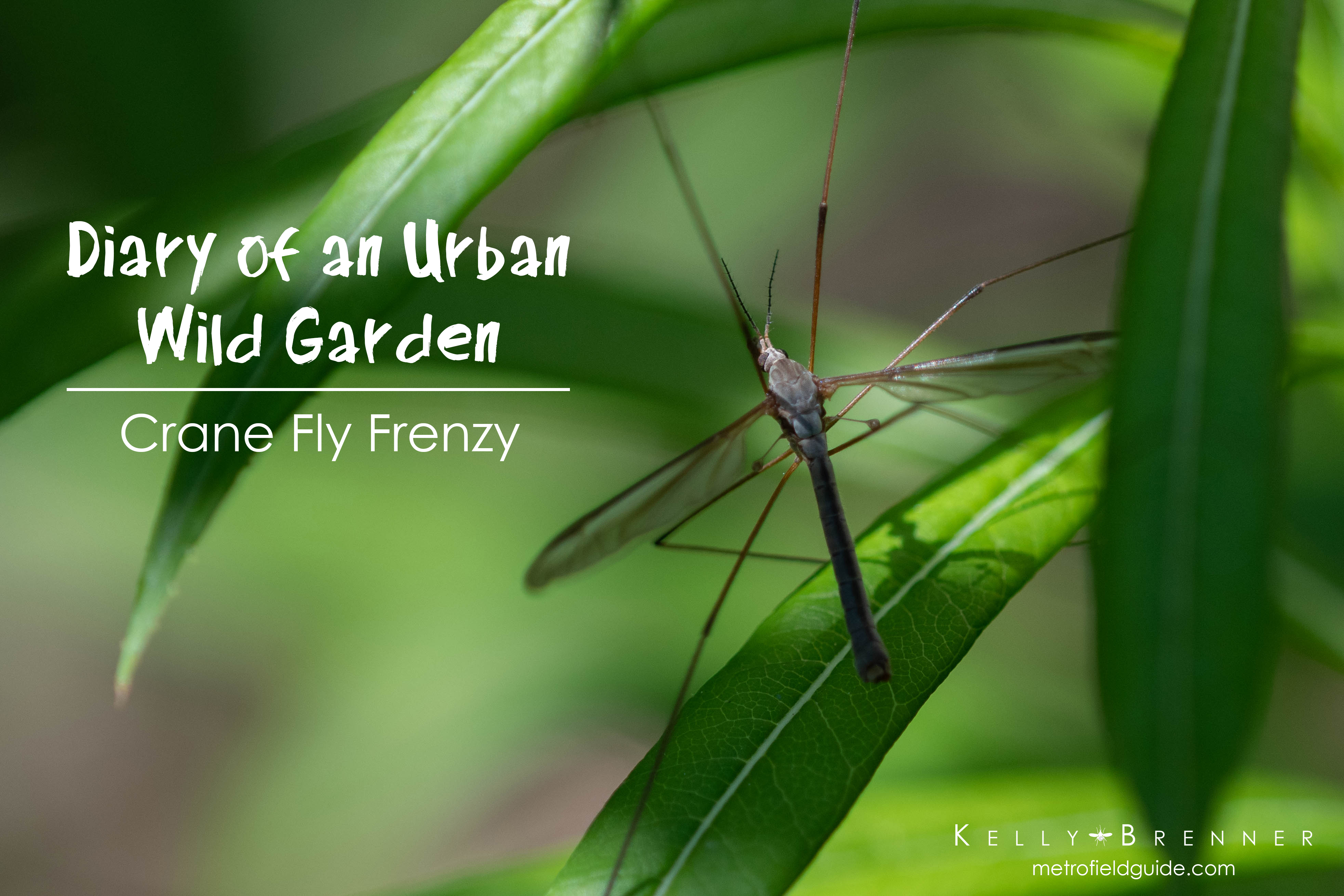 Diary of an Urban Wild Garden

When a crane fly is at rest, you can see how it resembles a crane, the long, elegant legs sit daintily on leaves holding the slender body aloft. But as soon as they take flight the illusion is shattered as their bumbling, clumsy flight is revealed. They don’t so much land on plants, but crash headlong into them.

Over the last few weeks, at the first sign of the awakening insects, I’ve regularly gone out into my wildlife garden with my camera to watch and document who visits. The usual mason bees showed up first followed by some large fuzzy digger bees. (More on the abundance of bees in another diary entry.) But I also began to see crane flies. They’re not new to the garden of course, I’ve seen them in the past, but recently I have seen a lot of them. More than I have ever seen before. Some days I would go outside and as I walked along my small path, I would scare them up making them blunder away, and crash land onto the fence. Other times, as I sat and watched the garden, I would slowly begin to pick out crane flies all over the plants. Earlier this week I scared up a mating pair, who plummeted into the osoberry and sat there long enough for me to take photos. But why am I seeing so many this year?

Yesterday I sat on a stone by my wildlife pond and noticed some movement at the base of one of the sedges. I looked closer and saw what I thought was a caterpillar thrashing around on the ground. I aimed my macro lens at it and quickly realized it was being attacked by small, reddish ants. It would pause for a moment before thrashing back and forth again. It was when it was paused that I realized it was not a caterpillar at all. It had no legs and no head. Instead it had two little alien-like antennae and what looked like wing pads. But it was all wrapped up, like it was a cocoon. It was then I realized I was looking at a crane fly pupa.

It finally dawned on my why I had been seeing so many crane flies this spring in my habitat garden. Their larvae, also known as leatherjackets, are well known to be found in lawns where they can be a pest, but some species live in moist and aquatic places like streams and ponds. It seems likely that some of these crane flies grew up in my wildlife pond. Crane fly larvae eat a variety of things like decaying plant matter, but some are predators and eat mosquito larvae. I have not once yet found a mosquito larvae in my pond.

I watched the pupa thrash about and with each jerk it came closer and closer to the edge of the pond. Eventually the ants gave up and the pupa was left lying near the water in peace.

Adult crane flies are not giant mosquitoes, they do not eat, they live only to mate. But they are an important source of food for other animals like birds.

If you like my posts, become a Patron and help support my work communicating natural history.

Become a Patron!
Liked this? Take a second to support Kelly Brenner on Patreon!