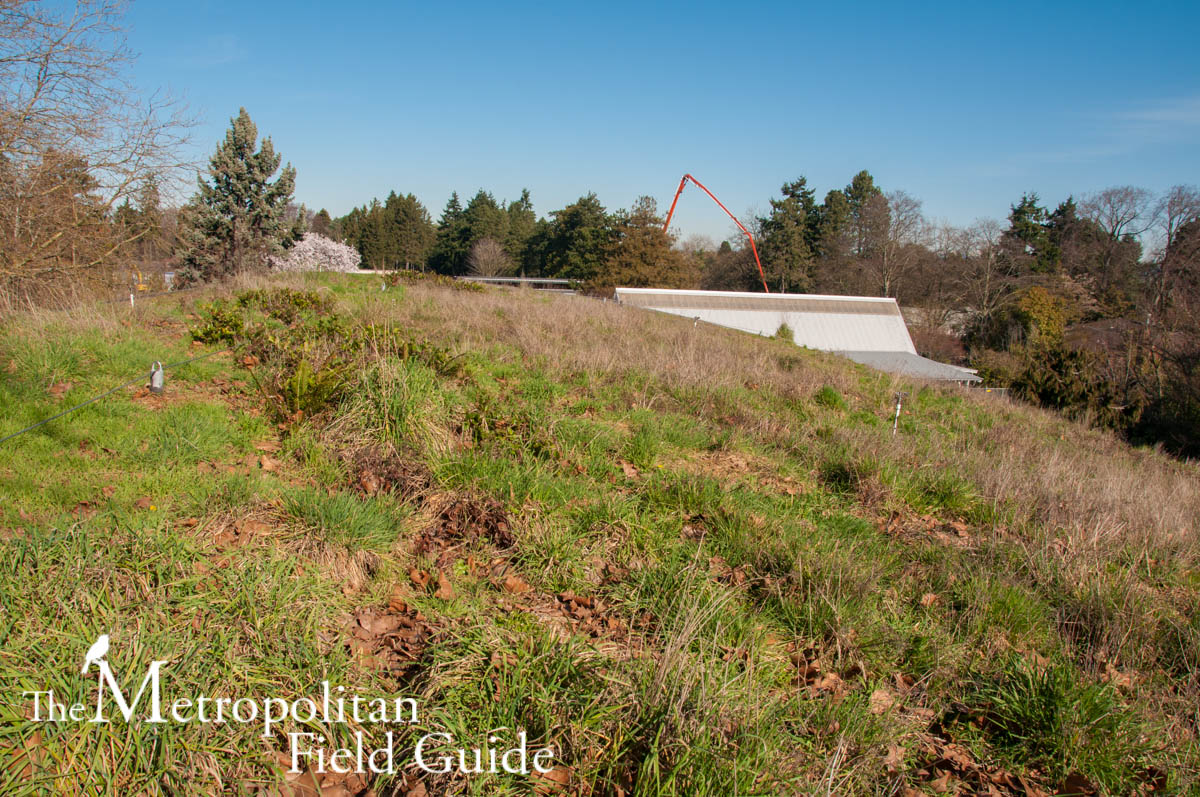 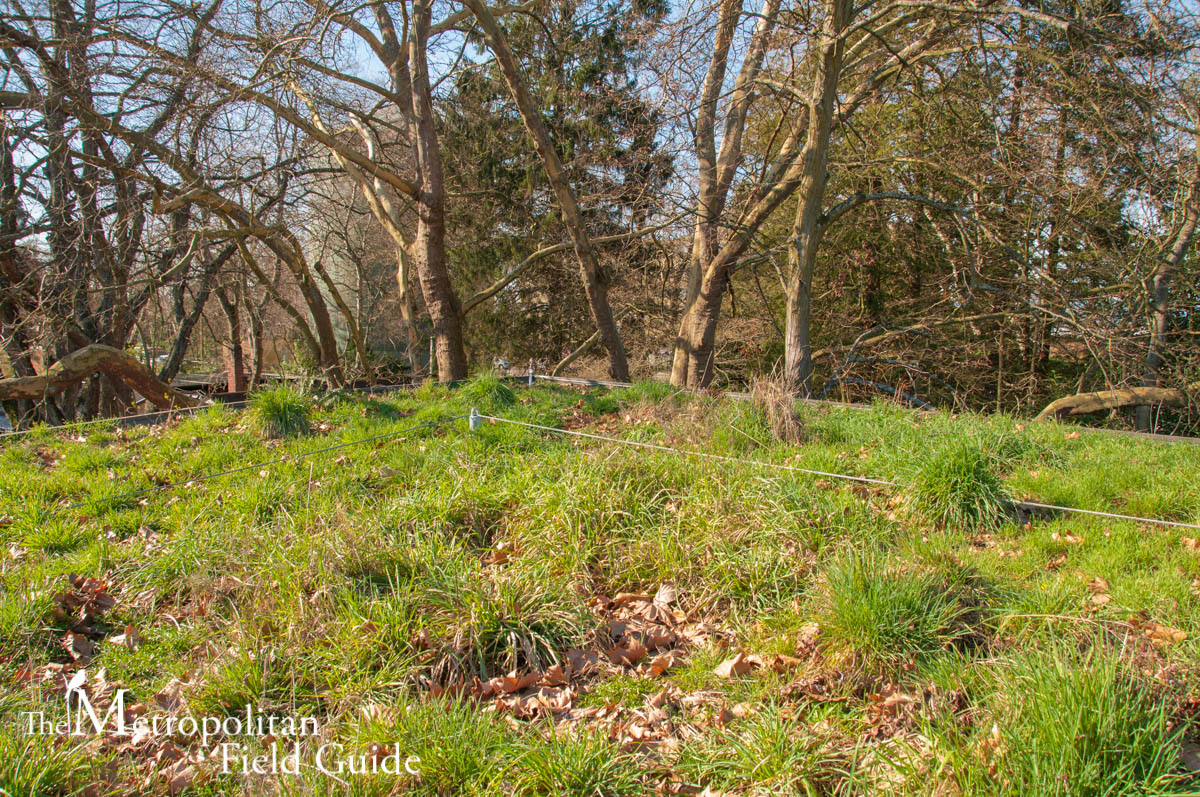 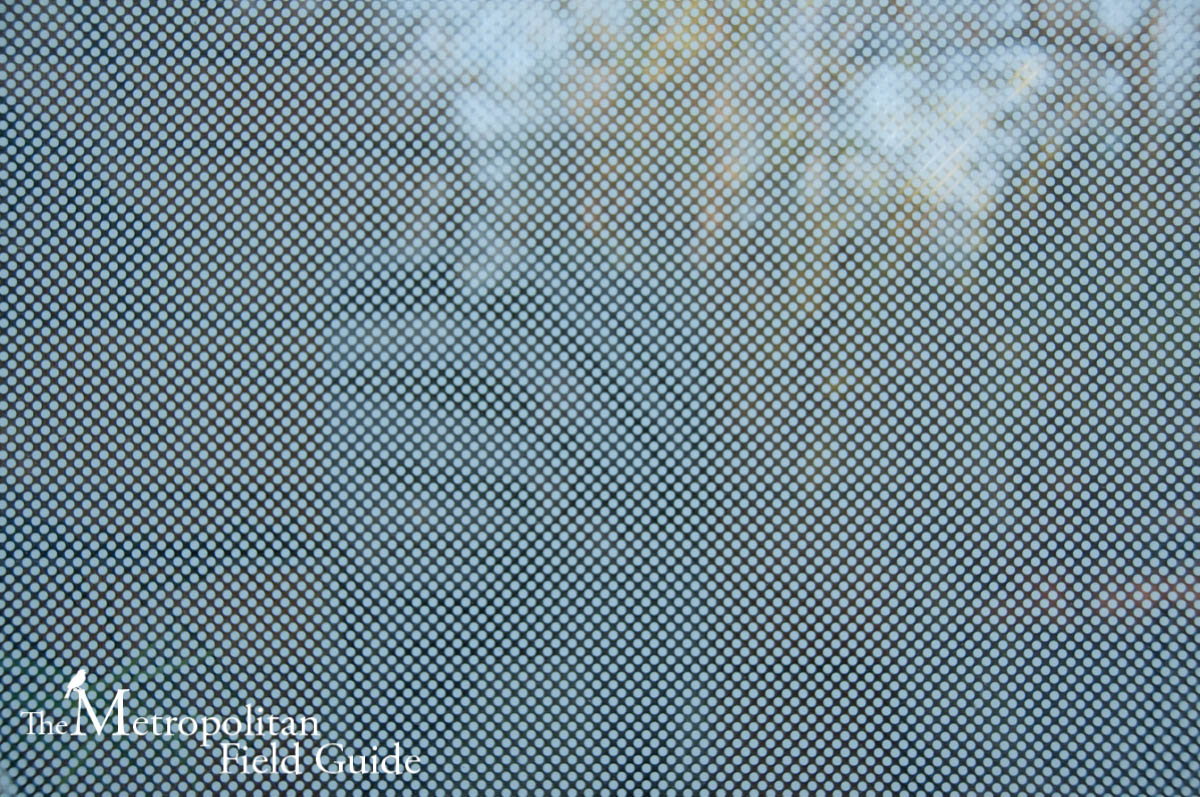 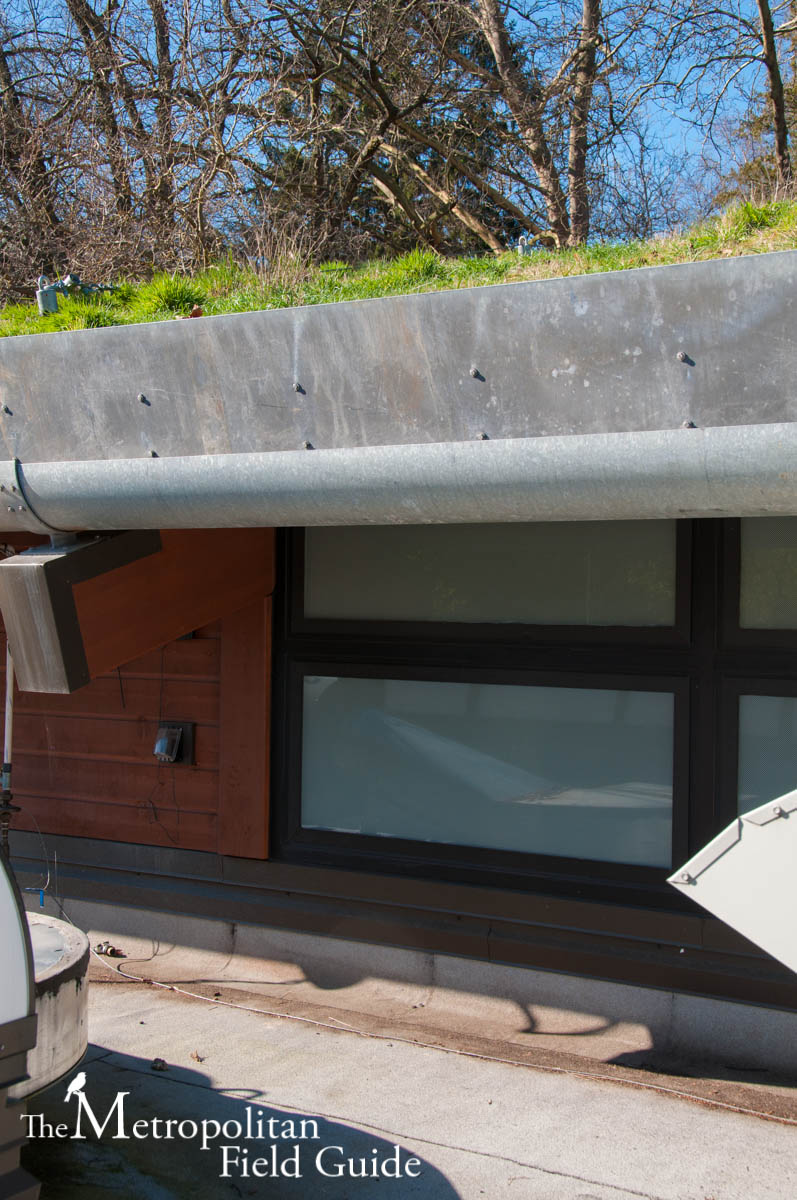 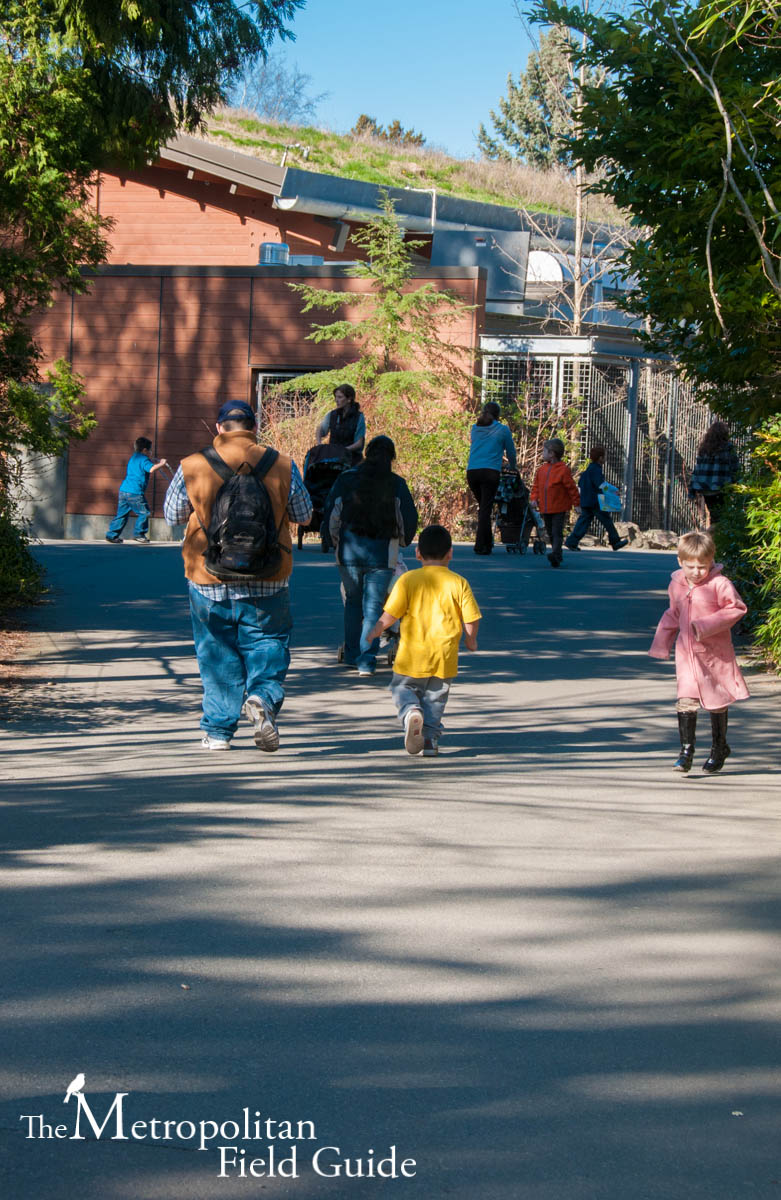 The Woodland Park Zoo and adjacent Green Lake is a bit of an oasis in that area of Seattle with no other green space close by. Being such an oasis they get a number of migratory birds stopping by along with other residential birds all of which they keep track of on their website. The zoo has a 50% cover canopy of trees and many other habitat elements throughout the zoo.

I wanted to visit their new green roof and David Selk, a Horticulturist at the zoo was kind enough to take me up on the roof and answer my questions.

The Zoomazium which achieved a LEED Gold rating and on top of the building is a green roof. The green roof was planned with the building design so they were able to make the most of the roof and instead of having to use a shallow soil layer with many sedums they have been able to be more creative with the design. The roof was completed in 2006 with 22,000 plant plugs planted which instantly provided a food source for the resident crows. Fortunately the plants and continued hand replacement prevailed and today the roof is a dense cover a multitude of native plants with almost no soil showing through.

Among the plants include wild strawberry, ferns, salal, lupine, kinnikinnick and onion. The rest of the plants have incorporated themselves on the roof with help from the wind or birds and the original plants have spread themselves out among the roof. Maintenance is minimal, once in awhile they have to hand remove the woody plants that have taken hold because if left alone, they could eventually penetrate the many layers on the roof and cause massive problems. Irrigation is set up but only used in severe droughts because most of the plants are native and therefore are adapted to the region and can sustain the typical droughts and cold.

The rooftop is a difficult landscape to plan for because of shallow soils, direct heat, low fertility and fast drainage. The Zoomazium roof was modeled after the landscape in Olympia which has similar conditions due to the last glacial age, when the glaciers retreated, scraping away soil and leaving a rocky soil, with fast drainage and low fertility behind.

Habitat was not specifically planned for when designing the roof, however bees have been observed and the spread of certain plants implies the existence of pollinators among them. There has not yet been any study on insect life on the roof although with the abundance of flowers there is bound to be some making use of it. I’m hoping to go back for a visit when the roof is at its peak to observe the use of the roof by insects and birds.

The roof blends in naturally with the rest of the surrounding landscape with similar plants. In the southwest corner of the roof large trees hang over the roof providing shade. The roof is sloped down from the west to the east and therefore several different zones are created due to less water higher and more water lower down. The edges, the far north and south ends are a little more sparse of vegetation and in these areas show evidence of crows or other birds digging up holes into the porous, pumice soils mixture looking for food.

It would be very interesting to add some patches of gravel to the roof to encourage nesting for nighthawks or killdeer, both have which have been known to nest on rooftops. Further enhancements could benefit wildlife by adding some tree branches or decaying logs. Branches add perching for birds and insects and decaying logs add nutrients and habitat for a multitude of insects.

Another interesting feature about the Zoomazium building is the glass they chose to use. It it textured with tiny dots which make it bird resistant to help prevent bird strikes. This is one of the features discussed in a recent post on here about bird safe building guidelines. See that post here.

The zoo as a whole is a very interesting creature as well. Being a zoo they have to keep ground predators out so no raccoons, skunks or opossums can get into the zoo due to a surrounding fence topped with barbed wire. This hugely benefits nesting birds. There are also no toxic plants due to the sensitive nature of the zoo animals as well as visiting children. Naturally there are a lot of habitats planned for the residents at the zoo and modern zoo planning designs biozones instead of grouping animals taxinomically so now you’ll find tropical rain forests, temperate forests and savannas instead of groupings of cats, monkeys or birds. These individual landscapes are designed with plants that can survive in this region but still give the appearance of the original region. Outside the animal enclosures the landscape is full of native plants, snags, down wood and rocks. The zoo even gets down trees from Seattle after windstorms and makes use of it in a variety of ways. Among some of the features I saw was a pond that looks to be ideal for dragonflies in the summer and a planting area of butterfly plants.

The zoo creates habitat for native birds and insects in a variety of ways, intentionally and unintentionally. Outside the exhibits is ideal for wildlife, but inside the exhibits there is suitable habitat as well and I found a variety of birds in the different exhibits including a flock of American Wigeons in the pond in the African Savanna and crows in the water in the black bear exhibit. The zoo creates a very interesting dynamic for habitat and wildlife, native and exotic.

Check back in the summer for another post when the roof is at its peak.

Click on any image to view it larger, visit the entire photo album here.

This is a very exciting upcoming competition addressing the issue of wildlife crossings. (See the right hand column on this blog for many links on the issue.) The competition website by the ARC states the following about the competition. ARC will 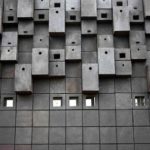 In Cardiff Bay, Wales there is a new housing installation aimed at birds and bats. Gitta Gschwendtner, a German-born, London-based artist worked with ecologists to create the new housing in Century Warf containing 1,000 different boxes. The wall sits along