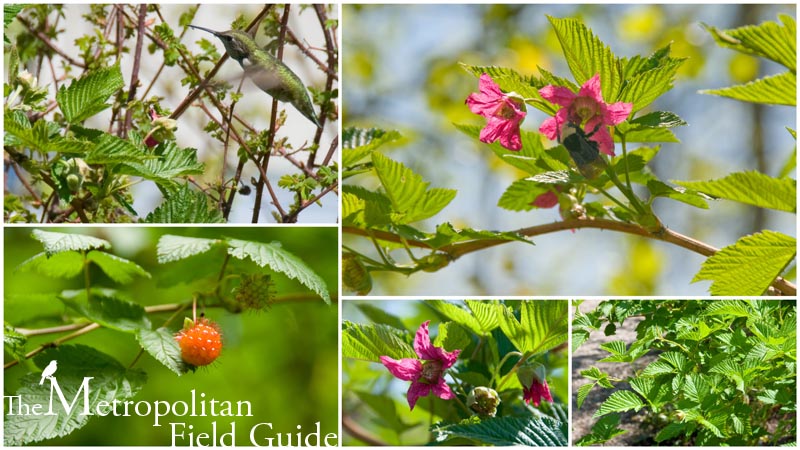 Dense thickets of Salmonberry (Rubus spectabilis) are a common sight to anyone hiking through the Pacific Northwest. It’s often found alongside creeks or in ravines growing up to 12 feet tall. Salmonberry can be found along the Pacific Coast from Alaska down to the Santa Cruz Mountains, most commonly along the coastal ranges. It grows like other plants in the Rubus  family, spreading by rhizomes underground. The branches have small prickles along the stems, but they fall off with the exfoliating, mature bark. The leaves are pinnately compound and dark green in color. Flowers appear in the spring and range from pink in color to red while the fruit appears in June and ranges in color from salmon to orange to red. The berries are edible, however not very popular to eat partly because they’re very watery and easily get mushy.

The native northwest coast people ate the berries which were often eaten with salmon, as well as the stems which were peeled and eaten raw or steamed. They also used the leaves to make a medicinal tea as a sleep aid. The bark was also turned into a powder and used by some tribes to sooth burns. The berries are suitable to be canned, made into jams or frozen, but due to their watery nature they aren’t dried.

It may not be suitable for all landscapes because of it’s unruly growth, but it would do well in parks, larger yards and other applications. It’s a good choice to aid in bank stabilization. Salmonberry also does well in disturbed soils.  It does well in damp soil, shade and it’s fast growing.

Because of it’s dense growth habit and prickles, it provides good shelter for birds and small mammals. The berries are popular with Swainson’s thrush which is often called the Salmonberry bird in multiple languages because birds tend to arrive at the same time the fruits ripened. The Swainson’s thrush will also nest in the Salmonberry. Many other birds eat the fruit including finches, wrens, grosbeaks, chats, robins, towhees and bushtits. Small mammals also forage on the berries such as foxes, chipmunks and squirrels and rabbits and deer will browse on the foliage. In wilder settings bears, elk and other large mammals will make use of the plant as well. It also provides excellent nectar source for butterflies, bumblebees and other pollinators and is a particular favorite of hummingbirds. Salmonberry is one of the earliest blooming plants visited by pollinators.