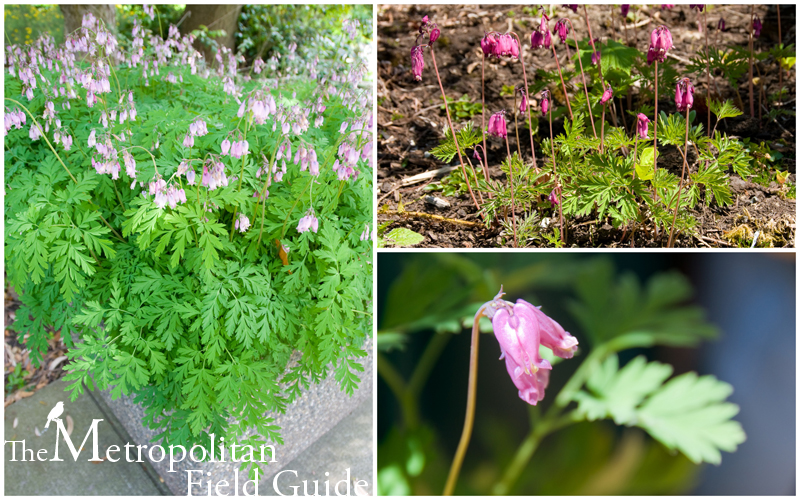 The pink, heart-shaped flowers of this plant define the Pacific Bleeding Heart (Dicentra formosa). While the flowers are not as showy as some of the popular ornamental varieties, the plant as a whole is still beautiful and offers great benefits to a variety of wildlife. Growing 8-18″ high, the plant is a perennial which dies back to the ground in the winter and is usually found in wetter settings such as forests, ravines and along creeks. The leaves are deeply cut which gives the foliage a delicate, lacy, fern-like appearance. The flowers, which stand only slightly higher than the foliage, droop downwards in small groups and are pink, heart-shaped with four petals creating a sac with spurs on the end and appear from April to June. The fruit is a seed capsule which contains several black, shiny seeds.

Bleeding heart is native to the west coast from British Columbia south to central California, mostly on the west side of the mountains and at lower to mid-level elevations. Bleeding heart requires soil which is porous, rich in humus and moist, but without standing water around the roots. It grows well in mostly shady conditions and is a good plant choice for tough conditions under other plants or trees. It’s a rather fragile plant and doesn’t do well with heavy foot traffic and so should be planted in quiet, low traffic areas or in containers.

Native people used the plant as well, some chewed on the roots for tooth pain and pounding the roots and taking as a tea was used for worms. It was also used to help hair grow by crushing the plant into a tea and rinsing over the head. However, it’s best to not experiment with this plant because many people find it toxic and can get a minor rash just from touching it.

Almost all of the pieces of the plant offer value to wildlife; the nectar rich flowers attract hummingbirds and bumblebees while the foliage will be consumed by the clodius parnassian butterfly larvae. The seeds are attractive to ants because they contain an oil-rich appendage which the ants like. As a result collect the seeds and aid in the dispersal of the plant by carrying the seeds back to their nests where they consume the fatty oil and then dispose of the seed in their refuse areas where a new colony of bleeding hearts will germinate and eventually grow. The plant also provides good shelter for amphibians and reptiles. It’s also a good choice for yards with deer problems because they tent to ignore this plant.