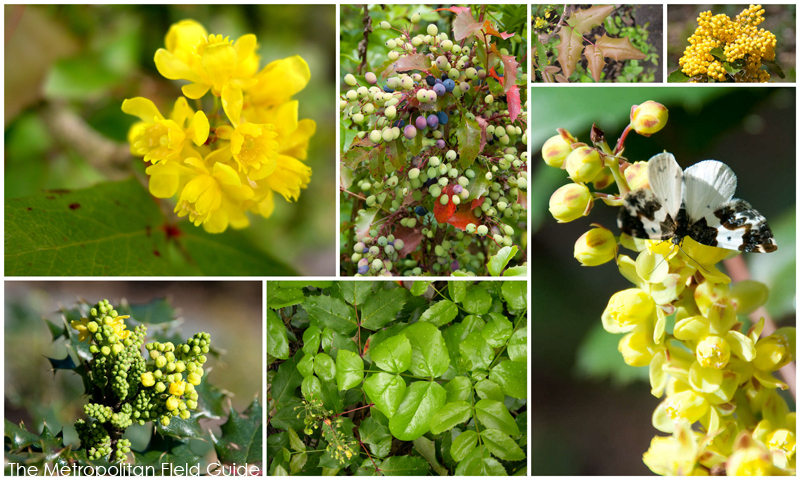 Tall Oregon-grape was one of the many plants collected  during the Lewis and Clark expedition and then studied by Dr. Mahone. Tall Oregon-grape may be familiar to more than just the Pacific Northwest, it was introduced into Great Britain in 1823 and became an expensive ornamental. Dull Oregon-grape was introduced a year earlier making them very old ornamentals. The berries were historically eaten in small quantities, or mixed with Salal berries. Today, it’s a local delicacy to have Oregon-grape jelly. The bark was also used by the Native American’s as a dye which was bright yellow due to the alkaloid berberine inside. Both the bark and berries were used for medicinal purposes for liver, eye and gall-bladder ailments, but it can be very potent.

Tall Oregon-grape has commonly be used for garden landscaping as formal hedges or screen and borders as well as background planting.  Dull Oregon-grape grows well in filtered shade under large trees and can also be used as a ground cover. It’s popular because of the bright flowers which bloom early and the fruit that follows, particularly when planted with other woodland plants such as Sword Fern and Salal.

The flowers of Oregon Grape are attractive to bees, butterflies and moths and bloom from March through June. It’s also a food source for birds and small mammals. Among birds that will eat the berries are forest birds such as grouse and pheasants as well as common songbirds such as robins, waxwings, juncos, towhees and sparrows. Small mammals include foxes, coyotes and raccoons. Painted Lady butterflies are known to use the nectar of the Tall Oregon-grape and I observed a Half-white Carpet Moth frequenting the flowers as well. Orchard mason bees are also known to frequent the flowers of Tall Oregon-grape for their nectar. Mining bees and bumble bees in addition to mason bees are the most common visitors. Dull Oregon-grape may also attract other pollinators. Both Oregon-grapes can be used by a variety of wildlife species for protection thanks to the plants spiny leaves and dense growth, especially when planted in groups.

Gardening With Native Plants of the Pacific Northwest