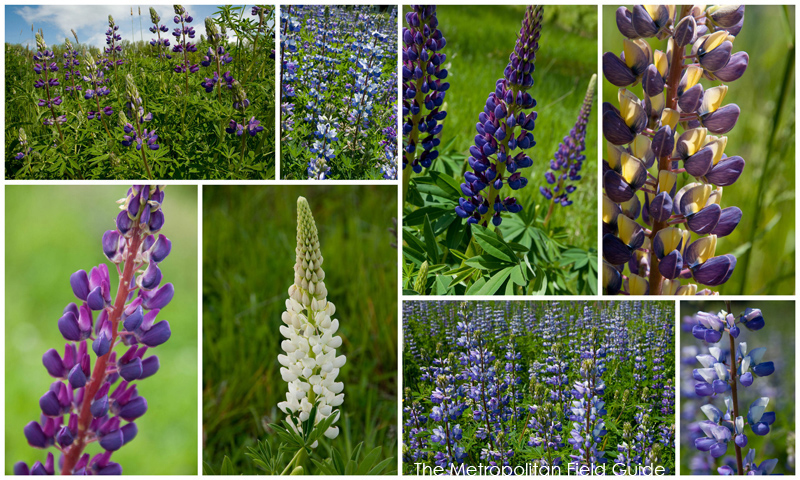 Lupines (Lupinus) are members of the pea family (Leguminosae) and there are many species native to the Pacific Northwest. In fact Lupinus and Trifolim (Clovers) together make up the largest genera in the family in the Pacific Northwest. Some of the species include Nootka lupine (Lupinus nootkatensis), Large-leaved lupine (L. polyphyllus), Silky lupine (L. sericeus) and Small-flowered lupine (L. polycarpus). Lupine’s are one of those plants that make it easy to convince people to create habitat. Their structure, leaves and flowers are beautiful and colorful, they bloom for a good length of time, and there is likely a species for most different habitat types. Indeed, Arctic lupine (L. arcticus) grows in subalpine elevations and the Seashore lupine (L. littoralis) grows down to the immediate coast. Some species grow in dry soils while others grow in wetlands. Flowers vary in color from blue and purple to white, pink or red and leaves vary in shades of green as well as in texture. They range from very short in stature, to upwards of 3′ high and a mass planting in a wetland can be stunning.

The roots of the Seashore and Nootka lupine were eaten by several groups of local tribes by roasting them or drying for winter use. However, not all lupine’s can be eaten, many species are poisonous because they contain toxic alkaloids. Large-leaved lupine or Bigleaf lupine is a popular garden ornamental species and has been cultivated to produce a variety of colors and shades. The seeds are easy to germinate and in a landscape setting they work well in wildflower borders or moist meadows. The Large-leaved lupine is listed in the Oregon Rain Garden Guide (PDF) as a good plant for rain gardens in all Oregon regions listed and as an added benefit, it fixes nitrogen in the soil.

Lupine’s span the range of wildlife they benefit from mammals to birds to insects. One of the largest, the Grizzly Bear, will feed on the roots of the Nootka lupine, and according to Plants Of The Pacific Northwest Coast, they have been known to “make large feeding excavations on north coastal estuarine marshes where both lupines and bears thrive.” On a smaller scale, lupine’s will also attract hummingbirds and butterflies while songbirds and small mammals will eat the seeds the plant produces. The bean-like seeds are also valuable to a variety of game birds. In addition it’s listed on Pacific Northwest Plants for Native Bees (PDF) from the Xerces Society as a good bee plant.

Lupine’s are also the host plant of other Blues, one of which has gone extinct. The Xerces blue butterfly once lived in San Francisco and several species of lupine were among their larval host plant. The Xerces blue has been extinct since 1941, another victim of habitat loss. A species closely related to the Xerces is the Karner blue, which is also endangered despite it’s wide range throughout much of North America. One of the Karner’s larval host plants is the Sundial Lupine (Lupinus perennis), which also has a wide geographic distribution. Sundial lupine also serves as a host plant for Frosted Elfin (Callophrys irus) and Elf (Microtia elva) butterflies. Additional butterflies that use lupine’s for larval food plants include Afranius duskywing (Erynnis afranius), Wild Indigo Duskywing (Erynnis baptisiae), Persius Duskywing (Erynnis persius), Arrowhead Blue (Glaucopsyche piasus), Boisduval’s Blue (Plebejus icarioides), Shasta Blue (Plebejus shasta), Silvery Blue (Glaucopsyche lygdamus) and Sooty Hairstreak (Satyrium fuliginosum).

Butterflies through Binoculars: The West A Field Guide to the Butterflies of Western North America

Caterpillars in the Field and Garden: A Field Guide to the Butterfly Caterpillars of North America

Butterflies and Moths of North America