There are few other plants so closely associated with scent than Lavender. The purple flowers and gray/green foliage is unmistakable and found in gardens around the world. The various forms can grow from ground high up to waist high and it is used and appreciated by both humans and wildlife.

Lavandula (more commonly known as Lavender) is in the mint family and the genus contains a complicated taxonomy with 39 species and countless cultivars. Lavendula angustifolia is the most widely cultivated species. It was  historically found in the Old World growing from India throughout the Mediterranean region of Africa and southern Europe. At times it escapes and grows in the wild where it is usually not a problem species with the exception of Australia where Lavandula stoechas has been declared a noxious weed.

It is a wildly popular garden plant and there is even a festival dedicated to the plant in Washington home to dozens of lavender farms throughout the state. There is book after book dedicated to growing, cooking and using lavender. Visit any craft fair, garden show or farmers market and you’re likely to find booths dedicated to selling all manner of lavender products.

It has been grown and used for over 2,500 years. It was used by the Egyptians as a perfume and for mummification and the Romans employed it for cooking and bathing. A fascinating history of the use and cultivation of lavender can be read here.

It has many uses; medical, culinary, fragrance and more. The name itself hints that it was used for it’s beneficial properties, it’s Latin root lavare means ‘to wash’. Research has confirmed that inhaling lavender scent offers calming and sedative effects. It was used historically in pillows as a cure for insomnia  and in fact according to the University of Maryland Medical Center “Scientific evidence suggests that aromatherapy with lavender may slow the activity of the nervous system, improve sleep quality, promote relaxation, and lift mood in people suffering from sleep disorders.” It is also used to relieve the itch of insect bites as well as repelling insects. In fact it was historically tossed on floors in castles because it was recognized even then as an insect repellent.

The list of ways to use lavender is nearly endless and includes everything such as scented sachets, herbal teas, crafts, cookies, balms, perfumes, wedding confetti, adding to clothing drawers for a fresh scent and to deter moths, soaps and floral arrangements. 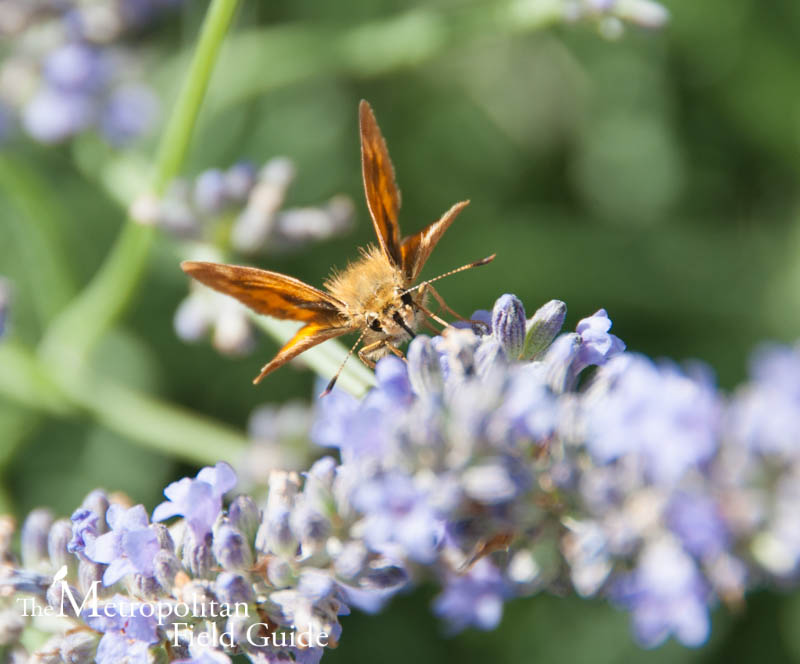 Lavender also has many benefits for wildlife, especially pollinators.  Flowers attract hummingbirds and many species of butterflies including painted ladies, woodland skippers and tiger swallowtails, all three of which are urban species. The only bird species I had regularly visit my 6th floor city balcony was an Anna’s Hummingbird which was attracted to the lavender. The flowers also attract pollinators of the bee kind including bumblebees, honeybees, mason bees, carpenter bees and carder bees.

Lavender needs well drained, loose soils and once established it is drought tolerant. Plant it in the sun. It works well in herb gardens or as you commonly see, as a border or small hedge as well as rock gardens. Lavender does very well in dry, sunny places where few other plants will thrive such as along sidewalks. Also consider using in a sensory garden or planting beneath windows so as to catch the scent during the summer when your windows are open. Lavender also makes a good container plant as it actually prefers to have its roots a little bit crowded. Plant it in well drained soil and place it in a sunny place.

Hold off on that packet of seeds though and pick up plant starts or propagate your own by cuttings or root divisions. Seeds are slow to start, have sporadic and low germination and cultivars from seeds are highly variable in their growth habits. 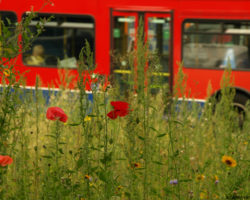 Growing Rivers of Flowers in the City

News Nature and the City:: "If we are ever to reach the stage where we can value the benefits as ecosystem services, or design therapeutic landscapes, we need to understand what the benefits are and how they operate." A Wilder Way:: Dutch