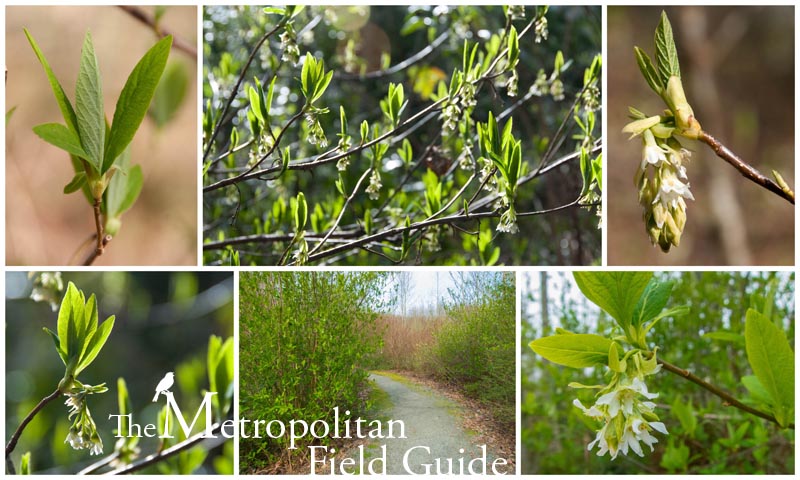 One of the first plants I placed in my new yard this past fall was the Indian Plum. The reason it received this honor was because it is the earliest plants to bloom in the spring. Walk through parks or natural areas in the Pacific Northwest as early as February and you’ll see white flowers hanging in chains from this shrub when most other plants still show no sign of awakening.

Indian Plum has many common names so the botanic name, Oemleria cerasiformis, is important to learn . Other common names include Osoberry, Skunk Bush and Bird Cherry. To make it even more difficult to find in books, it can often be categorized as either a tree or a shrub. It can be a small tree or more commonly as a multi-stemmed shrub. Indian Plum is a fast growing plant and can reach up to 20′ high and 10′ across. It grows in an open form and the branches arch out and down. It can be grown in sun where it will have a more compact form, but prefers shade.

It can be found growing in a variety of habitats such as forest edges, oak savannas, stream banks, along roadsides and of course city parks where I see it quite often. The plant’s native range is west of the Cascades from southern British Columbia down to California where it grows at lower elevations.

Indian Plum is a dioecious plant, male and female flowers grow in different plants. Leaves quickly follow the flowers and are quite narrow and oval in shape. They produce a smell of cucumber when crushed. The bark is a purple-brown color. The flowers which appear to hang in chains are actually growing in hanging clusters. The individual flower is white, fairly small and bell-shaped with five petals. You can tell the male from female flowers by examining whether they have the pronounced pistils of the female, or if they have stamens, which is the male. The scent of the flowers is not pleasant and is described in Plants of the Pacific Northwest Coast as a cross between “watermelon rind and cat urine”. Others report the female flowers to not smell bad, while the males are quite foul smelling.

Following the flower is a small fruit which looks, as the name suggests, like a small plum, about the size of an olive. It appears coated in a powder and inside is a large pit. They are edible, but rather bitter, although some foragers say they’re quite good when fully ripe. The Native Americans in the area ate them quite often and they used the twigs to soothe sore areas by chewing and applying it.

Indian Plum is also a good choice for controlling erosion on stream banks. Other uses for it can be in wet soil areas or to create thickets. It has also been reported to grow in polluted soils and other challenging conditions. It is a plant bothered by very few pests.

If you can find them already grown, they are one plant that does transplant well. According to Gardening with Native Plants of the Pacific Northwest it’s easy to grow from seed, if  the birds leave any behind. Saplings are also easy to find and dig up or try cuttings.

Hummingbirds will be attracted to the flower nectar while a multitude of birds and small mammals will eat the fruit such as waxwings, robins, deer and even foxes. Moths, butterflies, mason bees and other pollinators rely on this early bloomer as well. The fruit is so popular with wildlife that many people report never finding a fully ripe fruit to sample for themselves. A few moth species make use of Indian Plum as a host plant including Aseptis binotata, Aseptis adnixa, Graphiphora augur, and Homorthodes furfurata.