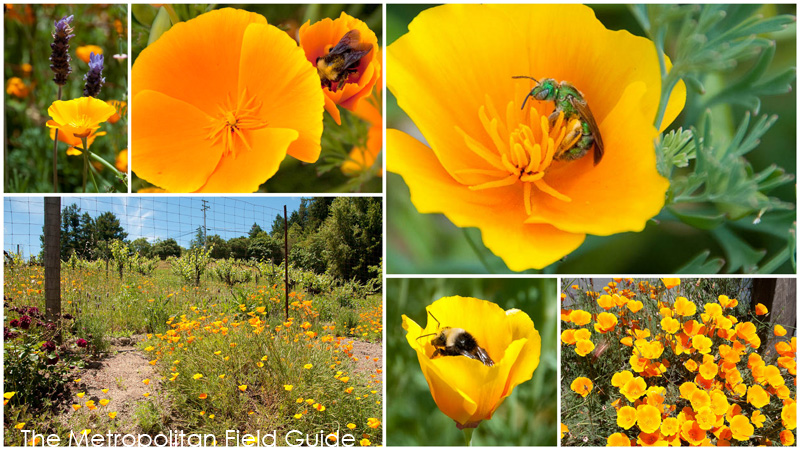 The California poppy (Eschscholzia californica) is an unmistakable bright splash found everywhere from roadsides and traffic circles to rocky slopes and vineyards. In fact early visitors by ship along the California coastline saw the sun hitting the fields of poppies and declared this was a land on fire. It’s native to the west coast of the US from the Columbia Gorge in southwest Washington south to California, but naturalized widely in the Pacific Northwest. Included in the poppy family (Papaveracea), this flower is the official California State Flower.

This perennial grows well in sun and partial shade and is quite drought tolerant. It grows about one foot high with divided, grayish leaves similar in form to parsley and orange or yellow flowers in a saucer shape. Flowers are short-lived blooming in late spring and they attract a wide variety of bees but with a little water the blooms can be prolonged. The petals close at night, re-opening in the morning but they will also close during bad weather. The fruit are capsules containing many seeds which self-sow easily when the pod ripens, splits and ejects the tiny seeds. The seeds can lay dormant for a long period, up to a few years, during times of droughts. As soon as the first rain washes over the seeds they will start to germinate immediately. With harsh winters or very dry conditions the plant is an annual, re-seeding itself every year instead of being a perennial.

Native Americans used the leaves as food and the roots for medicinal purposes, however aside from the leaves the plant is quite toxic. The poppy has spread throughout the world due to the fact that after the gold rush miers used sand from California, which contained poppy seeds, as ballast as they sailed away looking for more gold. It’s now used in much of the world as a popular garden plant.

Because California poppy grows easily in disturbed areas it’s a great plant to use alongside roads, in traffic circles, vacant lots, railroads, brownfields and other challenging locations. California poppies were used on the green roof of the California Academy of Sciences and would make a good green roof choice in many applications. I imagine it would make a great plant for seedbombing as well. The California poppy attracts a variety of bees, particularly bumble bees, honey bees and sweat bees, and is mainly pollinated by beetles. Butterflies are also attracted to the poppy nectar. After the flowers are gone birds are attracted to the seeds.