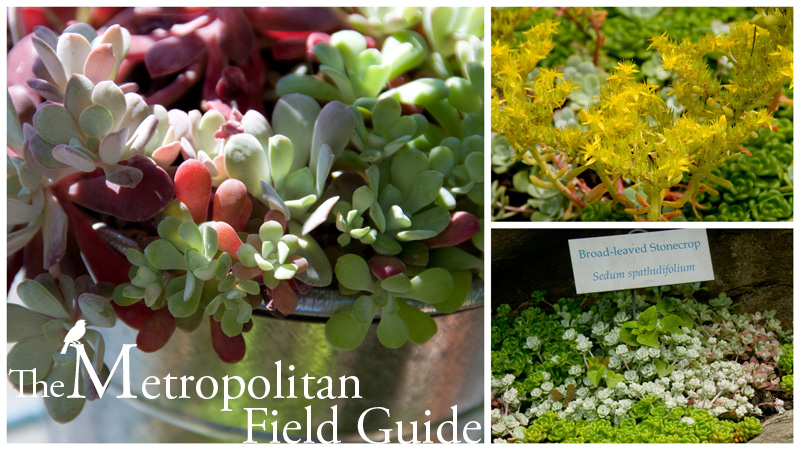 While you may not always associate succulents with cool, temperate climates, the Pacific Northwest has several native sedums which live and thrive in exactly those conditions. The Broad-leaved stonecrop (Sedum spathulifolium) is one of those succulents which grows only on the West Coast from British Columbia to California. It can be found at low elevations in coastal areas up to middle elevations and in habitats such as rocky outcrops, forest openings, cliffs and bluffs. However, you won’t find it in wet or overly shady places such as forests, woodlands or wetlands.

The plant grows very low, only up to an inch high and has plump, fleshy, wedge-shaped leaves growing in tight rosettes. The leaves are a green color on the inside and turn red or purple around the edges in the full sun and are coated with a waxy powder. The flowers are typical of most sedums, star-shaped, bright yellow flowers growing in a flat-top cluster on top of a stem 2-8 inches high. Flowers bloom in the Pacific Northwest from May to July. It’s a plant that can be greatly abused and ignored and still grow well. It needs limited water, good drainage with nitrogen poor, shallow, rocky soils. It grows in sun or partial shade, but prefers the sun and can tolerate the wind well. It’s also extremely easy to propagate by simply placing leaves, stems or rosettes in soil.

Broad-leaved stonecrop has a history of medicinal use by the native people and the Halq’emeylem used it as a styptic poultice while Songish women used it at the end of their pregnancy to ease labor. Popular lore about Sedum species in general was that girls would pick two pieces on Midsummer’s Eve, one to represent themselves and one for their lover. The pieces were measured for how long they lasted before turning brown and whether his piece bent towards hers to determine fidelity. For this it was dubbed the names ‘livelong’ and ‘longlong’.

Because of it’s growing properties, this among other sedums have become popular green roof plants and the California Academy of Sciences green roof is one place you’ll find this species growing. Interestingly, stonecrop growing on roofs was believed to protect houses from lightening and fires in past times. Broad-leaved stonecrop is an ideal choice for any conditions that mimic rocky outcrops such as rock gardens, among stepping stones, balconies, rooftops, building facades and containers.