(Photo from Gardens from the Green Streets Program)

The City of Vancouver, in British Columbia, has a successful Green Streets program where residents adopt a corner bulge or traffic circle. The gardener then designs, plants and maintains their adopted garden for as long as they like which can be a single  month or multiple years. I found this to be a fascinating project, particularly after my observations over the summer of the unexpected habitat I found in my own local roundabouts as well as the Pollinator Pathway, another local project I wrote about and recently helped to install several new gardens. I contacted Erin MacDonald, the Green Streets Coordinator, about the program, and she was kind enough to provided a lot of good information. I first asked what inspired this program and here is what she said:

The program began in 1994 as a pilot project in Vancouver’s Mount Pleasant neighbourhood. The success of the project inspired other neighbourhoods to get involved and liven up their streets. The Green Streets Program has been blooming ever since.

Back in 1994 in Vancouver’s Mount Pleasant neighbourhood, a network of traffic circles and corner bulges had been built to slow traffic at many neighbourhood intersections. At the corner bulge at Manitoba and 14th, a load of compost had been dumped in the bulge in advance of the shrubs and groundcover which would follow when a more reliable source of rainfall could establish the new plants. A neighbour, cleaning out his bird feeder before leaving on vacation, scattered the spent seed husks on the bulge to go with the compost. Upon his return from holidays he was greeted by dozens of sunflower plants, sprouted from seeds the birds had missed, voluntarily thriving in the fertile soil!

The sunflowers grew and blossomed and City Hall started getting phone calls. Neighbours called asking if they could plant the traffic circles and corner bulges near their homes. Others wondered if they could take care of the plants the city would provide. Enough interest was generated to start a pilot project and the Green Streets Program began with 15 volunteer street gardeners.

By 2006, hundreds of volunteer gardeners in 250 Green Streets gardens are expertly demonstrating what can be accomplished when neighbours are given the opportunity to have a say over the look and feel of their streets. Green Streets gardeners have created a remarkable and significant difference in their neighbourhoods, generating an interest and an enthusiasm that continues to motivate and encourage others to this day.

In each available area a sign is displayed, a green sign indicates it’s available for adoption while a yellow sign means someone is already caring for it. The City offers the assistance of a landscape architect to help gardeners create a planting plan for newly constructed traffic circles or traffic bulges. The City will also provide ‘structural’ plants which include plants that are drought tolerant and have year-round visual interest. After that it’s up to the gardener to add more plants and/or maintain them. Twice a year the City provides compost, but perhaps an even better bonus is the networking provided by the City which includes a newsletter, notification of plant give-aways, a Facebook group, a Green Streets Garden Party and a Mentoring Program which makes available a Master Gardener to the Green Street gardeners.

On the Green Streets website there is a list of recommended plants featuring shrubs, perennials, groundcovers and grasses, and another list of drought-tolerant plants (PDF) from the Blooming Boulevards Project which include some familiar natives such as Snowberry, Columbine, Lupine, Sword Fern and Stonecrop. The website also offers many resources for the gardeners such as Waterwise Gardening and composting as well as detailed planting, maintenance and safety guidelines. Being along the street, visibility is a big issue and one of the foremost recommendations are a maximum plant height of just under two and a half feet as well as keeping the edge plantings even lower. 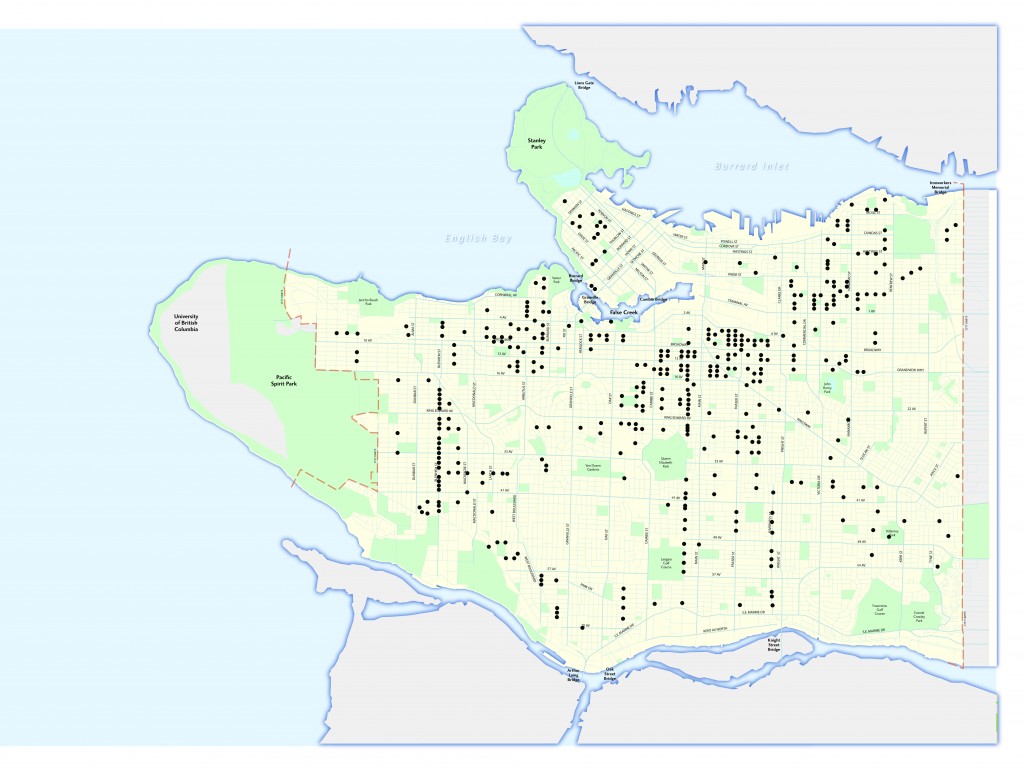 The program has been extremely successful. I asked Erin how many gardens have been adopted so far and she said, “Over 350 street gardens around Vancouver have been adopted by volunteer gardeners! There are about 150 – 200 that are still available and new street gardens are always being built as the city develops its bike routes and implements neighbourhood traffic calming plans. Sometimes people contact the City the moment they see markings on the road for a new circle to sign up as the Green Streets gardener.”

They are located all over the city, and according to Erin, some are in urban areas, but most tend to be in residential neighborhoods. See the map for a detailed look at the locations of the garden. I also asked about the reaction of neighbors as well as the gardeners and Erin says, “Vastly positive. I always hear heart-warming stories about gardeners meeting their neighbours and passers-by stopping to say ‘thank you’.” See the video below for many of these personal stories as well as the website which has several more stories.

Because of my observations of the use of my local traffic circles by pollinators I was curious if they had specifically addressed wildlife habitat as part of the program. Here are some of the questions I asked Erin and answers her answers about habitat and the Green Streets Program.

Have there been any reports of wildlife using the gardens such as pollinators? “Check out the video – it was impossible to avoid bees and butterflies during the filming. I’ve even seen some street gardens where residents have installed Mason Bee condos. The gardens are clearly a resource pollinators and other urban wildlife.”

Have any of the gardeners or sponsors considered wildlife when creating one of their gardens? “Yes, absolutely. Sometimes when working with volunteers to come up with the initial planting of a bulge or circle we talk about the type of plants that will attract bees and butterflies. We discuss planting to ensure that there is something always blooming in the garden. Last year, at the 2009 Green Streets Party, we had a guest speaker come and talk about pests and beneficial insects in the garden.”

Does your City Landscape Designer consider habitat when assisting the gardeners create new gardens? “Habitat may not be the main focus, but it is created regardless. Our focus is to ensure a drought tolerant, low maintenance garden that will have year-round interest.”

Do you take pollinator flowers or plants for birds into consideration on your recommended plant lists? “Again, I wouldn’t say it is a main consideration, but many of the perennials and shrubs we recommend are great plants for pollinators. Street gardens are a tough environment so it is most important that we recommend plants that have proven to do well and can withstand the harsh conditions of a hot, dry patch surrounded by asphalt and concrete.”

About future plans for the program, Erin said, “The program is always expanding and as it grows, we try to find new innovative ways to support the volunteers. For example, this year we started up a new event in the spring time to kick-start the gardening season. It’s a plant swap where gardeners can exchange plants and information.”

This program should be used as a case study for every other city in North America. It’s an excellent program for many reasons, one being the community involvement, and it is very apparent in the video below just how much the program impacts the citizens of the city. It beautifies the streets and neighborhoods with minimal cost to the city while it gives the community a sense of ownership and pride and brings them outside to converse and meet. For a city dweller, any space can be a valuable place to garden and I can see this program being very popular in Seattle and many other cities as well. From a habitat standpoint it’s equally valuable real estate. As I noted in the Unexpected Habitat post, even the smallest spaces such as traffic circles can attract many varieties of pollinators. We also know that urban bees fare better than rural bees because they are exposed to a greater diversity of plants, in part, thanks to plantings like the Green Streets Program. The Green Streets Program demonstrates that a program like this can work for the city, for the citizens and for the wildlife.

Kudos to the City of Vancouver and their innovative program and to all of the gardeners who have adopted a garden. 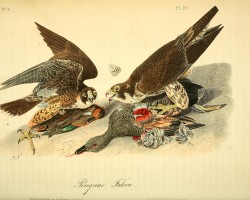 One of the most popular of urban birds has to be the Peregrine Falcon. They are watched, monitored, talked about, written about, recorded and rescued in cities around the world. In London they can be seen at the Tate during

Just when I thought I'd seen the last of the lady beetles on my balcony this year, I got more than I ever expected. I'd had a good time watching a couple dozen lady beetles grow from larvae to adults