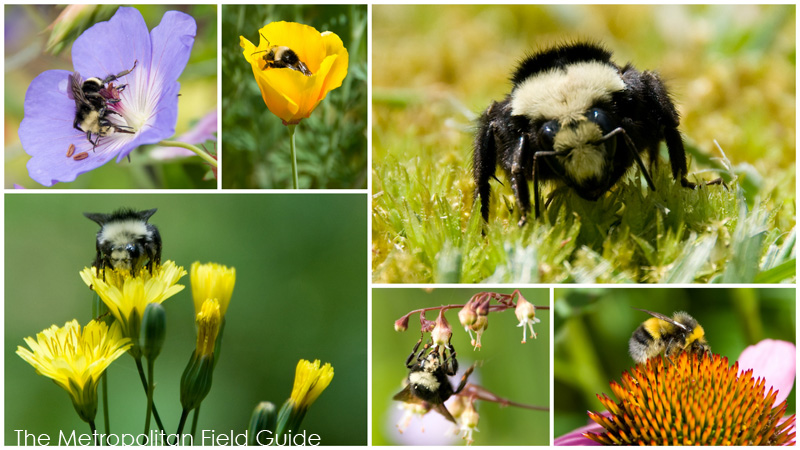 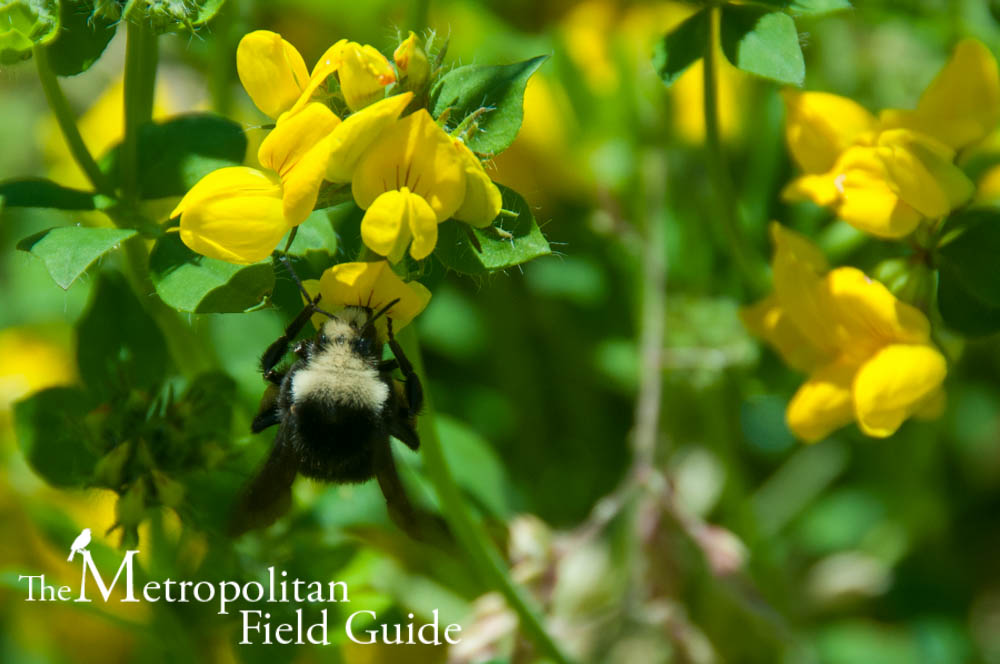 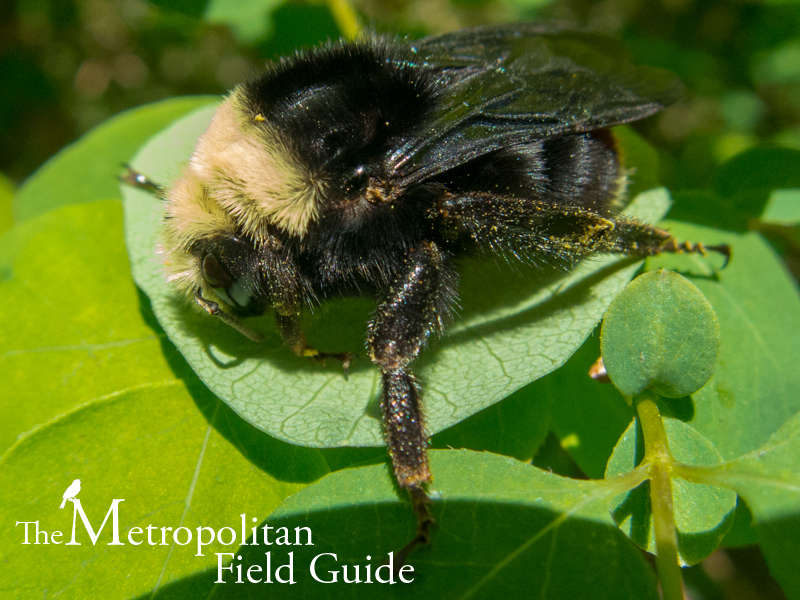 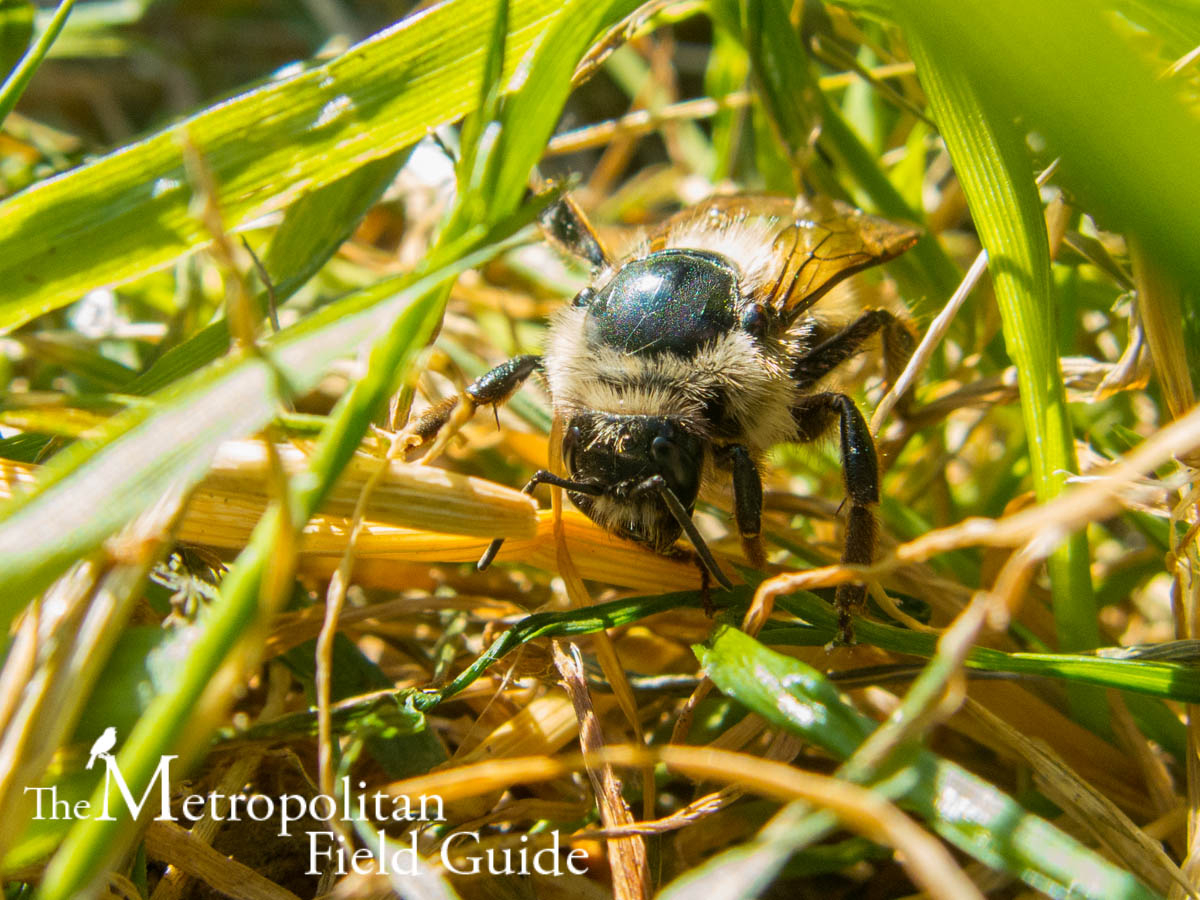 In the Pacific Northwest there are over a dozen different species of bumble bees and close to 50 in North America. There are over 250 species world-wide but the majority of them live in the more temperate climates of the northern hemisphere. Bumble bees are members of the Apidae family which also includes honey bees and carpenter bees. In the Pacific Northwest they vary in color, some with red, white, pale yellow,and orange, but the most familiar are black and yellow.

The various species are gentle and unlikely to sting unless their nests are disturbed, in which case they can defend their nests aggressively. Like the honey bee, they are social insects and make nests containing many individuals. Unlike the honey bee, bumble bees nests are annual, meaning the nest dies off each year. They are large and very hairy and the females carry pollen moistened by nectar in their baskets, which are structures on their hind legs that fill with pollen, but not easily seen when empty.

They are some of the earliest bees to emerge in the spring and stay around the longest, often the last to be seen into the fall. Bumble bees can regulate their own body temperature by shivering or basking in the sun. This enables them not only to stay active longer during the season, but also during wet or cooler weather. They visit a variety of flowers throughout the season and as such require many different plants that bloom during the full season. Many have long proboscis and can forage from deeper flowers than some other bees. They are also important pollinators of a wide range of crops such as watermelon, tomatoes and blueberries.

In the spring new queens emerge from their migration in search of a new place to build a nest. They nest socially with one queen starting her own colony.  The queen will produce an initial batch of worker bees to take over the foraging at which point she will start laying eggs around wax pots she creates to hold pollen and nectar. Near the end of the season the queen will produce a few males which will leave the nest to find mates and not return. At this time she also produces new queens. At the end of the summer nearly all of the colony will die, including the old queen, leaving only a few queens who will leave to mate before hibernating and starting new colonies the following spring. The new queens hibernate underground by digging several inches under either soil or leaf litter.

One species of bumble bee, Psithyrus is a parasite of other bumble bees and the queen will enter a nest where she will kill the existing queen. She then lays her own eggs which the existing workers tend and take care of. Bumble bees have other natural predators including certain maggots, sap beetles, some mites, shrews, mice and skunks.

Bumble bees have an interesting way they can pollinate called buzz-pollinate (sonicate). They grasp a flower and vibrate their flight muscles, but not their wings, to make flowers which require vibration, such as tomatoes, release their pollen. This makes an audible buzz somewhere around the musical note of middle C, hence the name bumble bees.

Bumble bees have also been used commercially being transported as far as Europe. Many of them are shipped beyond their native range and it is now thought that this commercialism of the bees is responsible for introducing new diseases which has done significant damage on many populations of bumble bees in North America.

Bumble bees will make use of a wide range of nesting places including under dead wood, in a tree cavity, in old nests from birds or mice or man-made boxes or shelters. In an urban environment they will also nest in building walls, bird houses, rock walls and other urban debris. Nests can be easily be made out of a wide range of materials. They can be as simple to provide as allowing a patch of grass to grow tall and fall over. This allows an area for rodents to nest in and as the grass falls over, makes it easier for the bumble bees to find them. Brush piles or fieldstones can also be created to provide cavities. It’s best to locate them away from people and activity where they won’t be disturbed unnecessarily and there’s less risk of seeming like a threat to them.

Artificial nests can be built although occupancy in them is often low, often less than 25 percent. The basic requirements for built bumble bee nests are a supply of dry insulation materials and an undisturbed area. Dryer lint, fiberglass insulation or cotton can all be used, but not medical cotton which the bees get stuck in. The outside can be a constructed box or a flower pot. Ideal nest boxes have two chambers, one for waste and one for nesting. Adding a tunnel entrance close to the ground level, but above potential flooding is a method. For detailed directions on how to build a box out of plywood see Landscaping for Wildlife in the Pacific Northwest

or Attracting Native Pollinators: The Xerces Society Guide to Conserving North American Bees and Butterflies and Their Habitat

. There are also links below with further directions for creating nests.

There are many common and native plants that will attract bumble bees. Because they are large, they will forage as far as a mile or more away from their nest location. Plants they prefer include those listed below as well as Bee Balm, Blackberry, Blueberry, Fireweed, Goldenrod, Huckleberry, Phacelia, Salal, Spirea.

This is a nice overview on British bumble bees that was produced by a student as part of their masters degree. 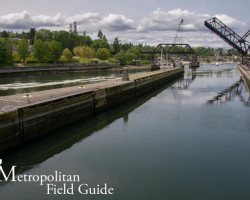 The Hiram M. Chittenden Locks in Seattle, have been moving boats and other vessels from the Puget Sound to Lake Washington and beyond since 1917.  The Army Corps of Engineers built and maintains the locks, garden, grounds and buildings. To