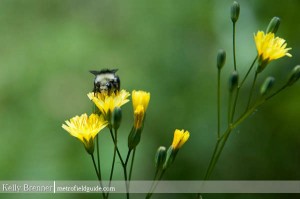 Over at Cities and the Environment, the electronic journal for the Urban Ecology Collaborative, the current issue features urban pollinators, specifically bees. There are some interesting articles ranging from the question of green roofs being valuable habitat for bees to enhancing community gardens with bees.

Can green roofs provide habitat for urban bees (Hymenoptera: Apidae)? (PDF) is an interesting paper that discusses the challenges of increased urbanization and the potential role that green roofs can play in supplementing patches of habitat. In addition to cooling the “heat island”, reducing storm water runoff and improving air quality, it’s been suggested that the roofs of buildings that have replaced habitat such as shopping and industrial complexes could serves as replacement habitat for pollinators. Green roof studies in Europe have found positive evidence that green roofs can be suitable for ground nesting birds, and a variety of spiders and beetles, however no similar studies have been done in the United States.

Because of the importance of bees and the ecological services they provide, and the fact that they are in decline, they are a focal target species for green roof habitat. This paper studied sites in Toronto, one extensive green roof that was actively seeded with grasses and wildflowers and a second that was not actively seeded but contained naturally occurring grasses and flowers. They compared the green roofs with ground level sites.

The study resulted in providing evidence that green roofs can provide a certain level of habitat for foraging and nesting. While they found more diversity and species richness at the ground sites, they found that green roofs supported similar bee communities. They also noted higher species abundance and richness for the green roof that was actively seeded, although that was just a preliminary report and needs to be studied further.

The authors also highlighted an interesting idea of the further importance of attracting a diverse range of bees to green roofs. The pollination service they provide may be crucial to maintaining a healthy ecosystem on the green roof because they enable the flowers to reproduce every year thereby reducing the need for human intervention to reseed and replant. The bees also help to provide habitat on the roof for other wildlife species as well. Additionally, a well populated green roof with a diverse bee community could greatly assist urban agriculture in cities.

The topic of bees and urban agriculture is addressed in the next paper, Bumble Bee Abundance in New York City Community Gardens: Implications for Urban Agriculture. This paper surveyed community gardens in New York where cultivated colonies of the European honey bee are rare as well as illegal. Urban gardens thus rely on native and local bees to pollinate the crops. One of the issues the paper looked at was the fact that bumble bees in more natural settings forage far distances, but the fragmentation and dangers of cars and buildings may limit the distance bumble bees can travel.

19 different community gardens of varying sizes in the Bronx and East Harlem were surveyed by the authors. They caught many bees and painted a dot on them that corresponded with the garden they were originally found in so they could track their regularity to each garden. The study resulted in a recapture rate that varied between 30% and 68%. Despite some of the gardens being within the normal foraging range of bees in more natural settings, they didn’t find any that had traveled to other gardens. This suggests the gardens provided much of what the bees needed including continual flowering and long bloom times of various species that provided ample pollen.

Numbers of individuals in each garden ranged from 46 to 164 which the authors found surprising due to the small size of the gardens. They found a surprisingly high abundance considering the urban environment and small gardens with an estimated 8 bumble bees per 100 m², compared to grasslands in Sweden with only 1 bumble bee per 100 m². The authors theorize this may be because of the high diversity of flowering plant species in community gardens and other green spaces.

Nesting was not observed in any of the community gardens, but the authors highlight the importance of having suitable nesting places in the urban setting with low human disturbance such as street trees or large urban parks with areas of low human use.

Modification of a Community Garden to Attract Native Bee Pollinators in Urban San Luis Obispo, California offers a look at another community garden that has been modified to attract bees. The authors highlight the importance of community gardens for urban agriculture but also for environmental education, ecological research and a sense of community, bringing people together. They propose that community gardens can be used for food as well as habitat for bees to forage as well as nest.

They began to add bee-attractive plants based on seasonality as well as diversity based on their knowledge of which species of bees prefer which different flowering plant species. In addition they placed these new plants in patches because larger plantings allow bees to stay in one place longer.

They also focused strongly on community outreach and education by giving talks to the gardeners as well as tours and passing out information and even doing a survey.

The number of bee species increased each year of the study. Increased plant diversity was believed to be the cause of the increased diversity of native bees that occurred in the years during the study. They also found that there are predictable relationships between bees and plants and by knowing these a greater bee diversity can be achieved by planting those known plants.

The overall result of the experiment and survey suggests that by planting bee-attractive plants each year, overall bee diversity and abundance is likely to increase.

Cities and the Environment journal

Nestworks 1 2 3 via:: 51% Studios 51% Studios, an architecture firm from London, has created Nestworks 1 2 3 as part of the London Festival of Architecture, running through this weekend. Their design is three, ready-made nesting structures, blocks, boughs

Insect hotels, mansions and other dwellings

In a continuation of the insect theme from the post about the Beyond the Hive Competition, here are some more