I continue to be  surprised as I walk around the city by the tiniest of patches and pockets of habitat. As I mentioned in the first Unexpected Habitat post, these areas are perhaps not perfect, they’re not all native plants, they don’t offer all of the necessary elements, and yet they are being used by wildlife. Recently I walked through an alley with an unexpected row of plants alongside a building. There was the most minimal space for soil and some harsh afternoon sun, but nonetheless, many plants were growing and the bees were visiting them. Despite being an alley I found it a very nice space. The plants along the brick wall and the interesting architecture of the windows and hobbit-size, wooden door were rather enchanting.

In the Capitol Hill neighborhood of Seattle a new community garden is currently under construction called Seven Hills Park. It consists of a large grassy area with seven large boulders representing the historic landscape of Seattle, an allay of trees on one end and a new type of community garden at the other end. This garden, or P-Patch as they’re called in Seattle, will be a collective garden. While other community gardens have designated spaces that are rented out, this one will be a collective, a new experiment in Seattle. As of my last visit, the grass was starting to sprout and the garden area had been staked out and labeled. What excited me were two of the stakes that were labeled ‘Butterfly & Hummingbird’ and ‘Pollinator Paradise’ among the rest of the labels for herbs and vegetables. I also noted several large logs off to the side that look like they’re going to be incorporated into the garden. I’ll be watching closely to see how the garden progresses. 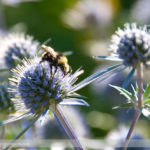 Recently, I revisited the Thomas Street P-Patch which I highlighted in the last Unexpected Habitat post and observed more wildlife. There were many butterflies flitting about and a yellow jacket nest that had notes warning visitors, but the real star was an Eryngium plant, which was teeming with all manner of bees. There were dozens of individual bees and at least half a dozen different species. I’m not sure what specific type of Eryngium it is, but it was incredibly popular with the bees. 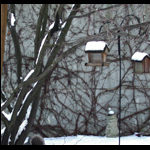 In the northeast corner of Illinois you can find the city of Round Lake and the Round Lake Area Public Library. The courtyard at the library has been landscaped and is a certified wildlife habitat by the National Wildlife Federation.

Interesting Nature The Beauty of Insect Eggs:: From the latest issue of National Geographic shows a fascinating side of insect eggs, through a microscope. The details of these structures are simply amazing. Ladybug:: Also from National Geographic, this profile of our aphid-fighting