The Tree year is a world-wide project started this year where participants choose a tree, shrub or some combination and write about it throughout the year. I once did a similar project at my college, where I kept a journal of a deciduous larch during one term. This time however, I plan to watch more than just the turning of the leaves, I plan to watch the wildlife from birds to insects, the leaves, the weather’s affect, the other plants around and on it, and any other surprises I find. I wanted to choose a tree that I walked past regularly in my neighborhood, but I had a really hard time choosing one because there were so many great options. Several were good candidates and I changed my mind multiple times over the course of a single week.

In the end the birds helped me finalize my choice and I decided to watch a grove of four birch trees. I confess part of my decision was because I saw what appears to be a Crow nest in one tree, which intrigued me, and as I was looking at it, a flock of Bushtits came through the trees and I was hooked. I had been considering a series of three oak trees around the corner, but the Bushtits shunned them for the birches and that clinched it. One more bonus of these trees is that I can go up to the patio on the third floor of my apartment building and view them from above which gives me a good view of the nest and a nice vantage point of the street trees.

Three of the birch trees are situated along the street in that narrow strip between the sidewalk and street and the third is in a yard on the other side of the sidewalk. These are true city trees, located in the Capitol Hill neighborhood in Seattle, they show the scars of graffiti, broken branches, crooked growth and compacted soil. They are mercifully free of power lines and hopefully will never be horribly pruned. They are not very thick, the smallest is perhaps 20″ in diameter and the largest maybe 30″. They’re fairly tall though, maybe somewhere between 30-40′, I’m not very good at guessing tree height, but he largest is at least as tall as a four story building.

I’m not sure exactly what kind of birch it is, perhaps once the leaves come out I’ll be able to better tell, but I’m leaning towards a Betula pendula at this point. They are of course, bare of leaves now in January, although the catkins hang all over the thin, drooping branches. There are a lot of mosses and lichens growing all over the trunks which are fascinating upon close inspecting. There are some that are yellow and hug closely against the bark as well as one that is white and layers upon itself. At the base is green moss or lichen that looks like a beard growing off the trunk.

So far this month the trees have suffered through several wind storms. They’re located on the very top of Capitol Hill and subjected to regular winds, sometimes upwards of 50 mph or more gusts. Earlier this week we had one such wind storm and the next day there were several branches on the ground around the trees. I gathered many of these branches for use in an insect hotel I’m creating for my balcony.

As I mentioned, I’ve already observed our neighborhood Bushtit flock gleaning for insects during a walk last week. Although the birch branches overlapped the oak branches around the corner, I didn’t see a single Bushtit set foot into the oak trees which I found peculiar. There is also a medium-sized nest which appears to be made out of branches. I’m hoping it’s a Crow nest and that it’s used this spring again. I recently finished reading Crow Planet: Essential Wisdom from the Urban Wilderness

, and I’ve been watching Crows very closely lately. I’ve already had a couple of interesting experiences, one I documented on the Seattle Urban Wildlife Experiences community blog.

I’m sure it’s going to be an interesting year watching my adopted trees progress through the seasons.

This is the third and final post in a series looking at wildlife movement, corridors and roads. Read the first post, Ecology Lesson: Population Movements, which was followed by Corridor Ecology and Planning. 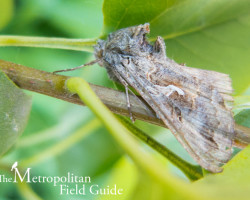 Book Review:: Discovering Moths: Nighttime Jewels in Your Own Backyard