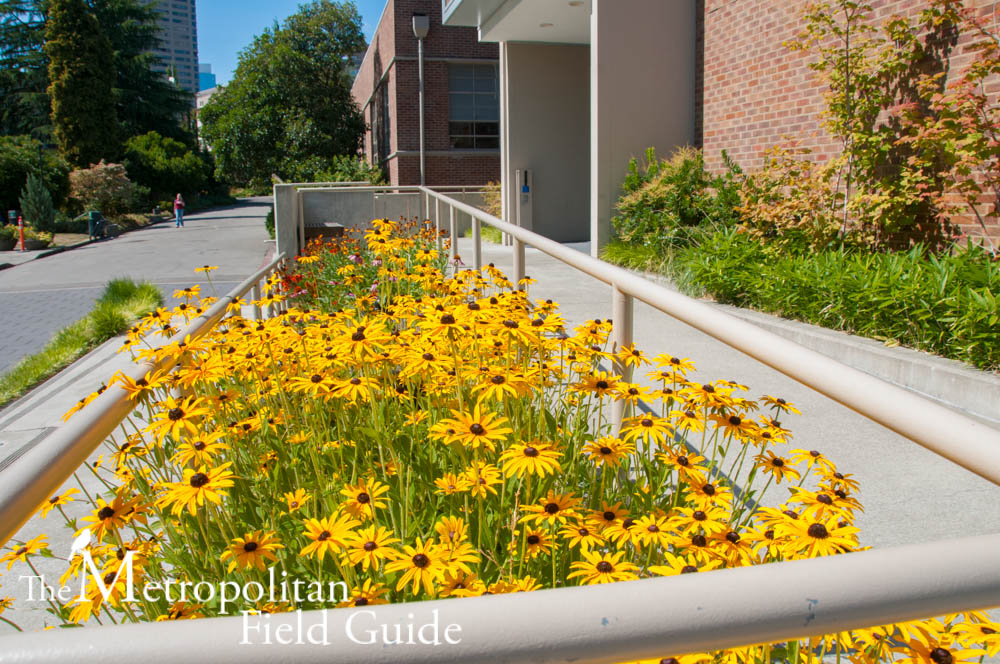 Seattle University sits on 48 acres in the middle of Seattle, a five minute walk east from the middle of downtown. It’s in between the First Hill and Capitol Hill neighborhoods and is surrounded by hospitals, medical centers, stores, restaurants and housing. The campus has had a long commitment to sustainability dating back to the 1980’s when the college hired Ciscoe Morris, who is now a local gardening expert and celebrity. Ciscoe ended pesticide use by releasing beneficial insects on the campus which was successful and in turn launched an entire pesticide-free program. The success of the landscaping program spilled over to other sustainable practices such as an award winning recycling program, also begun back in the 1980’s. More recently the campus has seen LEED certified building, Built Green building, a composting program, solar power, electric vehicles, and a multitude of other green practices.

In the landscape the campus has addressed stormwater management with a green roof installed in 1989 and a rain garden installed after several basements in buildings on campus flooded in 2006. The grounds have won several awards for their sustainable practices and in 1989 the campus was designated a Backyard Wildlife Sanctuary by the Washington Department of Fish and Wildlife; then in 2007 the campus was certified as Wildlife Habitat by the National Wildlife Federation.

Among the campus-wide wildlife habitat, there are several specialized gardens, several of which focus even further on habitat. Three of these gardens are the Rain Garden, Wildlife Garden and the Ciscoe Morris Biodiversity Garden, all of which I visited this week.

I’d often passed along the edge of Seattle University, but never actually stepped inside so it was a new experience once I finally did. I walked in at the main campus entrance on 12th Avenue and right away could get a glimpse at the essence of the campus. The long sidewalk is lined with a great number of plants such as heath, grasses and lavender, many of which were in full bloom. The landscape to one side has a rounded edge to the plant beds bordered by small areas of lawn, which contrasts nicely with the linear sidewalk plantings. From the entry I walked towards the new library which is currently under construction and by peaking through the fencing I saw a landscape that looks like it may be another stormwater management project.

In the other direction is the Rain Garden which at this time of the year was quite dry, but filled with tall grasses. Around the depression where the grasses were growing are large stones that serve as benches. Along another side is a quiet, shady lawn under a large maple that overlooks the rain garden. The back side of the Rain Garden is along one of the closed campus streets and on the other side are several birch trees which were alive with foraging bushtits while the shrubs under the trees, along the building had ground birds such as sparrows. Within the campus are also areas of more exotic plantings which offer a bright contrast, especially when placed next to the Rain Garden.

Near the Rain Garden is Union Green which is surrounded by plant beds with many layers of plantings from low-growing groundcovers to mid-level shrubs such as Oregon Grape to tall trees. Even along the concrete edges where picnic tables and benches sit, are stone planters filled with plants. Plants seem to fill every possible surface including a space in front of Hunthausen Hall, where the ramp and stairs meet is an explosion of color with flowers of bright yellow, red and orange full of various bees.

To the other side of Union Green is the Wildlife Garden which takes up the entire side of the green. Unfortunately Union Green was roped off due to a construction project so I was only able to view the garden from the deck that overlooks it. There is a grass pathway that leads from the green into the habitat area full of plants, bird and bee houses and a bog that was very low on water but would be filled the rest of the year. According to the Seattle University website the plantings were selected to provide food in the form of seeds and nectar as well as leaves for insects and the garden is designed to attract insects, birds, butterflies and other wildlife.

In front of the Garrand Building is a rock wall similar to the one I highlighted in the post Stone Walls for Wildlife. This wall is an excellent example of a habitat wall because the large stones are set together with large spaces in between them where many plants, such as fern, can grow. The other spaces in the wall leave plenty of room for wildlife to take shelter. Across the street is a large courtyard with a sculptural fountain where I found many dragonflies flying around (video below). The tall pine trees along the back side of the courtyard were full of Black-capped Chickadees and as I tried to track down another call I came face to face with a Bewick’s Wren when I stuck my head inside a large Rhododendron along the edge of the courtyard. I also noted a Sequoia that looked like it had been visited by sapsuckers.

Located behind Loyola is one of the newest gardens, completed in 2008, the Ciscoe Morris Biodiversity Garden. In the garden are smaller demonstration gardens, the first of which is seen while walking up the stairs and is the Native Shade Garden. Along the slopes are plants such as Wild Ginger that demonstrate alternatives to common plants such as ivy. At the top of the stairs is the next specialized garden which is the Pollinator’s Garden and is full of a variety of flowering plants. Around the corner, next to a small waterfall and pond is the Hummingbird Garden. The walkway surrounds a grassy area in the middle of the garden with a couple of picnic tables, an ideal place to have lunch or spend a break. Throughout the garden are bird houses of various forms and sizes as well as mason bee houses and signs that discuss various aspects of the design of the garden and use of the houses. In the Biodiversity Garden I saw many bees (video below) and hover flies while one of the bird houses seemed to be in active or recent use and the mason bee house looked like it was also in use.

The Seattle University Campus is an excellent example of not only an urban wildlife oasis, but it also shows how a campus can manage to balance habitat with native plantings and the traditional campus landscape. For many campuses it’s always a struggle, because while some may want to make the campus more sustainable by adding habitat and native plants, there is often the challenge from others who believe a campus should look traditional with turf quads, formal plantings and linear spaces. Seattle University has taken their own approach to that debate by creating a unique space that is in part formal, functional, aesthetic and sustainable. It’s truly a gem in the city and among college campuses.

Watch the slideshow below or visit the Flickr gallery to see all of the images from the Seattle University campus.

The Metropolitan Field Guide on YouTube
Bees in the Biodiversity Garden

Dragonflies flying around the courtyard fountain