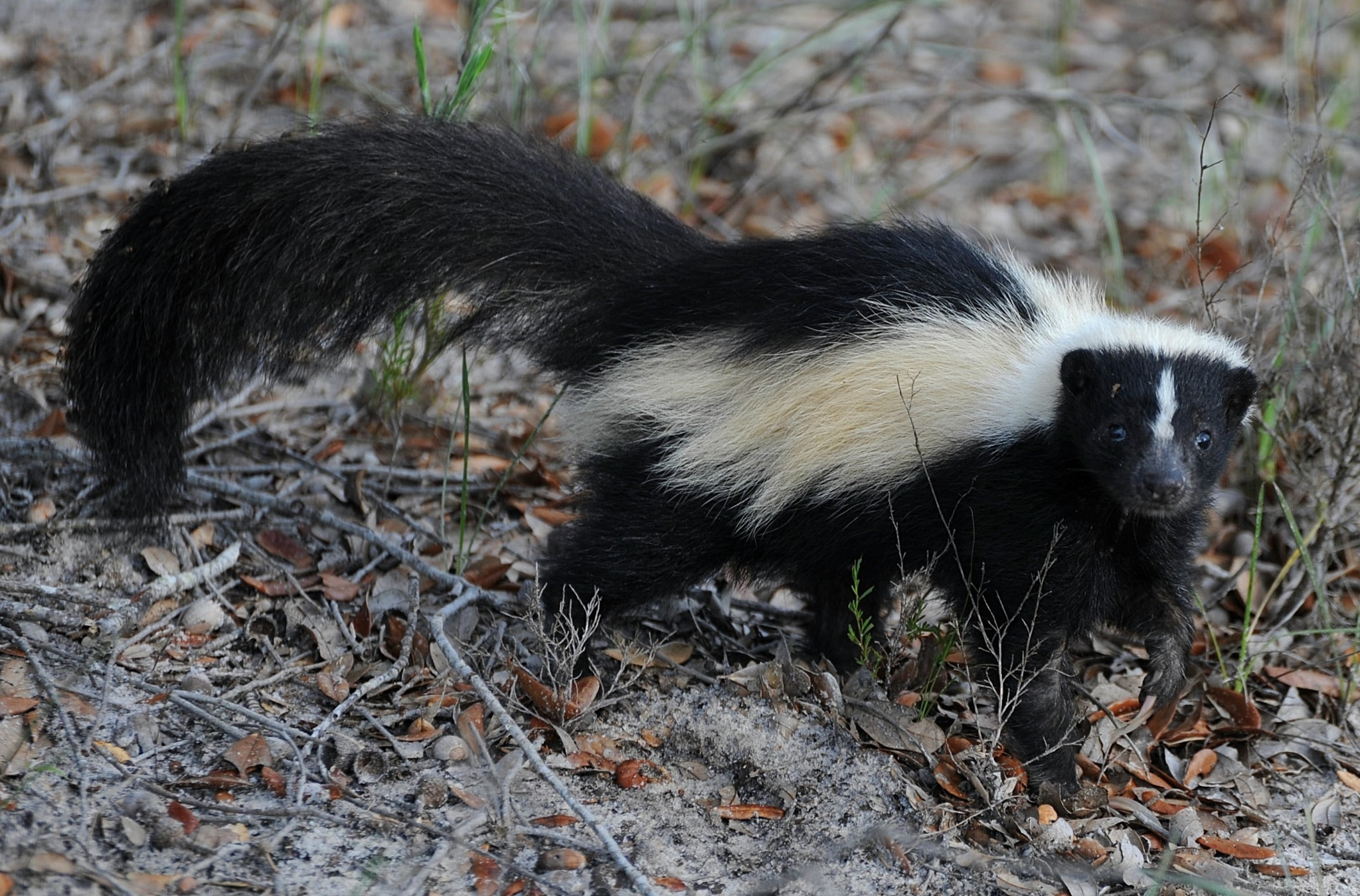 On Being Misunderstood:: Striped Skunk

From the perspective of us humans, many animals have a single, outstanding feature that overshadows all of their other traits. Giraffes have long necks, snails are slow, blue whales are really big, and so on.

For skunks, the dominant feature is their bad smell. Like many mammals, we humans have a good sense of smell. We tend to avoid and disdain anything that smells foul to us. So skunks often get written off as smelly beasts to be avoided.

Luckily for the skunks, this is exactly what they want: to be left alone.

Humans and most other animals know to steer clear of skunks, to avoid being sprayed with the horrible-smelling fluid that comes out the back end of a skunk. This fluid, called musk, is a finely-tuned chemical weapon that has evolved as a defense against predators, such as wolves, coyotes, bears, and mountain lions. The only wild animal that skunks need to fear are Great Horned Owls, which like most birds have no sense of smell.

Spraying musk is a last resort for a skunk, since producing the fluid is costly in terms of energy and time. A skunk will first posture with a raised tail, hiss, and stamp its feet when threatened. If all that doesn’t work, then it’s time to spray.

Other traits shared by skunks are a cat-like body with short, muscular legs and a large, fluffy tail. The long claws on their front feet are used for digging up insects and worms, as well as for excavating dens. Skunks are omnivores that eat a wide variety of foods, including invertebrates, small mammals, amphibians and reptiles, eggs, berries, nuts, and roots. 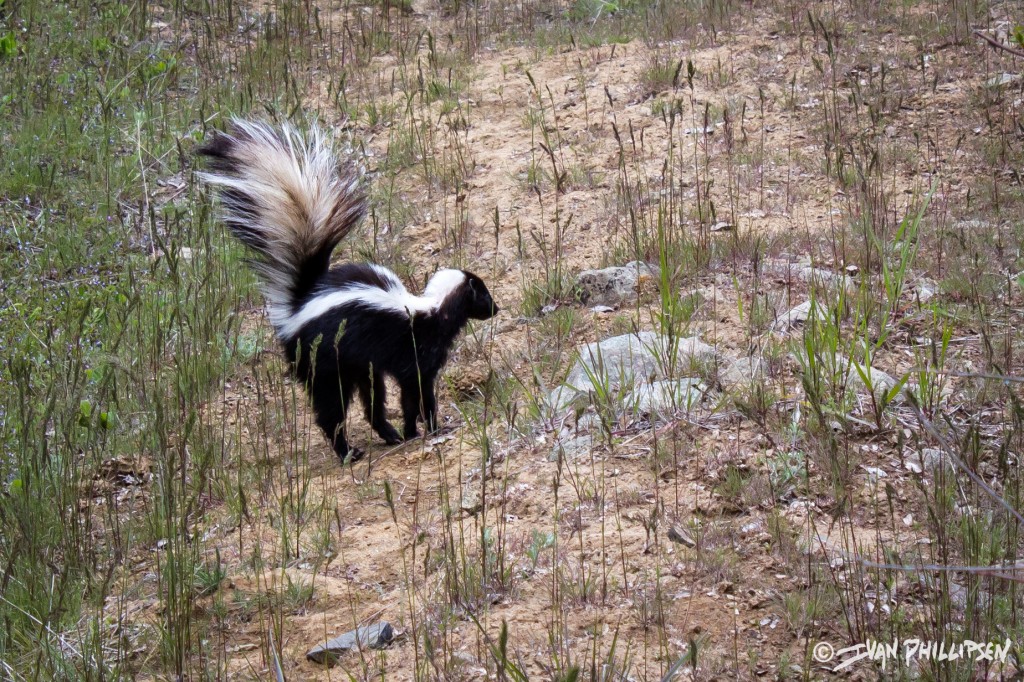 The preferred habitats of the striped skunk are woodlands and grasslands. This species is found throughout the U.S. and much of Canada. It has adapted well to living in farmlands and suburban areas. It is most active around sunset and sunrise (i.e. it is crepuscular).

City-dwelling people who have never encountered a live skunk might still have a sense of what striped skunk musk smells like. Skunks are often killed by cars as they roam in agricultural and suburban areas. They have poor eyesight and cannot see cars approaching. Long after a skunk becomes roadkill, its distinct smell lingers and wafts along the highway.

Other people have more direct contact with skunks and may consider the animals a nuisance. Skunks sometimes make their dens underneath porches and houses. They will eat crops and pull up lawns to look for grubs. Being omnivores with broad palates, skunks like to pick through human garbage and are fond of cat food. They share these habits with raccoons. They also eat honey bees, which can be a bother to beekeepers.

Dogs aren’t as savvy as their wild canine relatives and tend to harass skunks, instead of leaving them alone. Dogs get blasted with musk, then their owners have to clean them up. Tomato juice doesn’t work, by the way. Skunk musk can be neutralized using a solution made by adding ¼ cup (60 mL) of baking soda to a quart (0.95 L) of 3% hydrogen peroxide.

In general, skunks keep to themselves and do very little harm, if any. They can be beneficial when they eat pest insects or rodents. Nevertheless, people sometimes kill them or forcibly relocated them. When the presence of a skunk just can’t be tolerated, relocation is certainly the most humane approach.

Skunks are charming animals that are a pleasure to observe, if you are lucky enough to have the opportunity. Because they are so confident in their ability to ward off predators, skunks are more relaxed around humans than are many other mammals. They are gentle and easy-going, compared to their hyperactive weasel relatives. Many people even have skunks as pets.

There’s really no need to fear skunks or condemn them as smelly nuisances. We should instead celebrate them as the fascinating, resourceful animals that they are.

About Ivan Phillipsen –  Ivan Phillipsen is a naturalist who loves to share his knowledge of wild things and places. You can check out more of Ivan’s photos and writing on his blog, Wild Pacific Northwest.

This new video from the ASLA (American Society of Landscape Architecture) is "an animation that explains how to transform your property into a real wildlife habitat. Learn how native plants and designed structures provide what nature needs." It's great to see

This short video mixes photographs and short video clips which demonstrate the beauty of a suburban wildlife garden. It also offers a stark comparison to a house with the more commonly seen lawn front yard. This garden is certified at