On Being Misunderstood:: Pocket Gophers

I wasn’t exactly in the middle of some exotic location, watching strange wildlife that nobody had ever seen. Truth be told, I was sitting in a lawn chair on the edge of my lawn on an almost-hot, summer afternoon. Despite this rather mundane setting, there was indeed some interesting wildlife activity occurring. Every minute or so, dirt would push up from the middle of an expanding small mound of bare soil, almost like a slow-forming, miniature volcano, just four feet from my chair. Occasionally, the little earth mover would pause for a few seconds with its head exposed, beady black eyes returning my stare. Man and beast, with life in the balance. 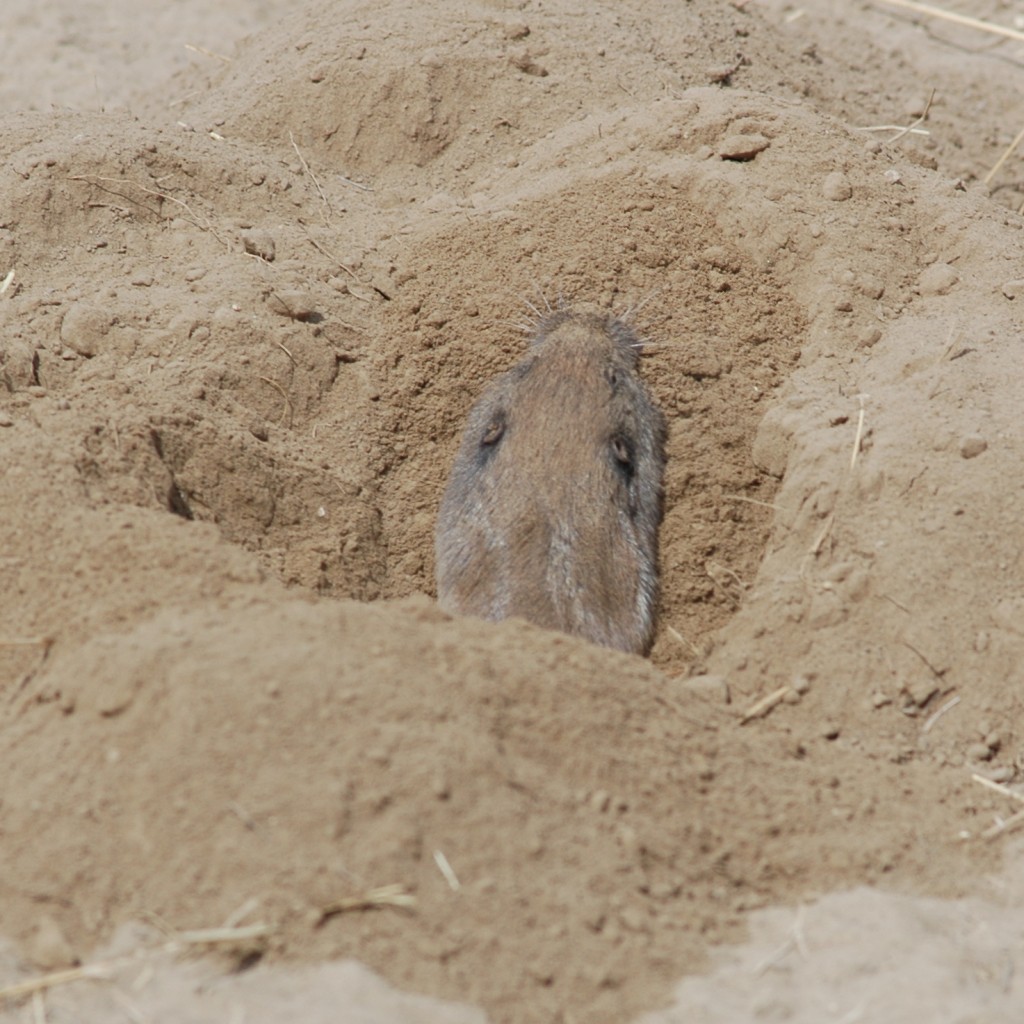 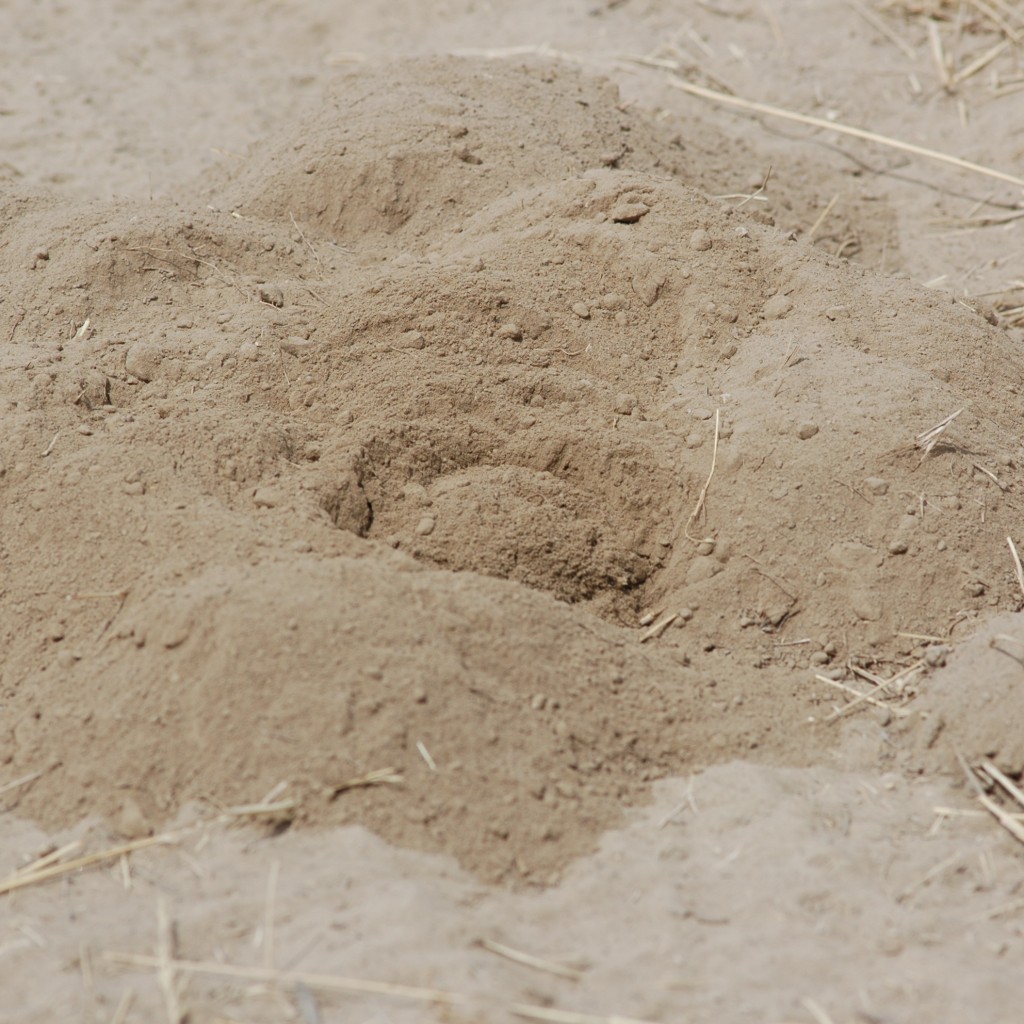 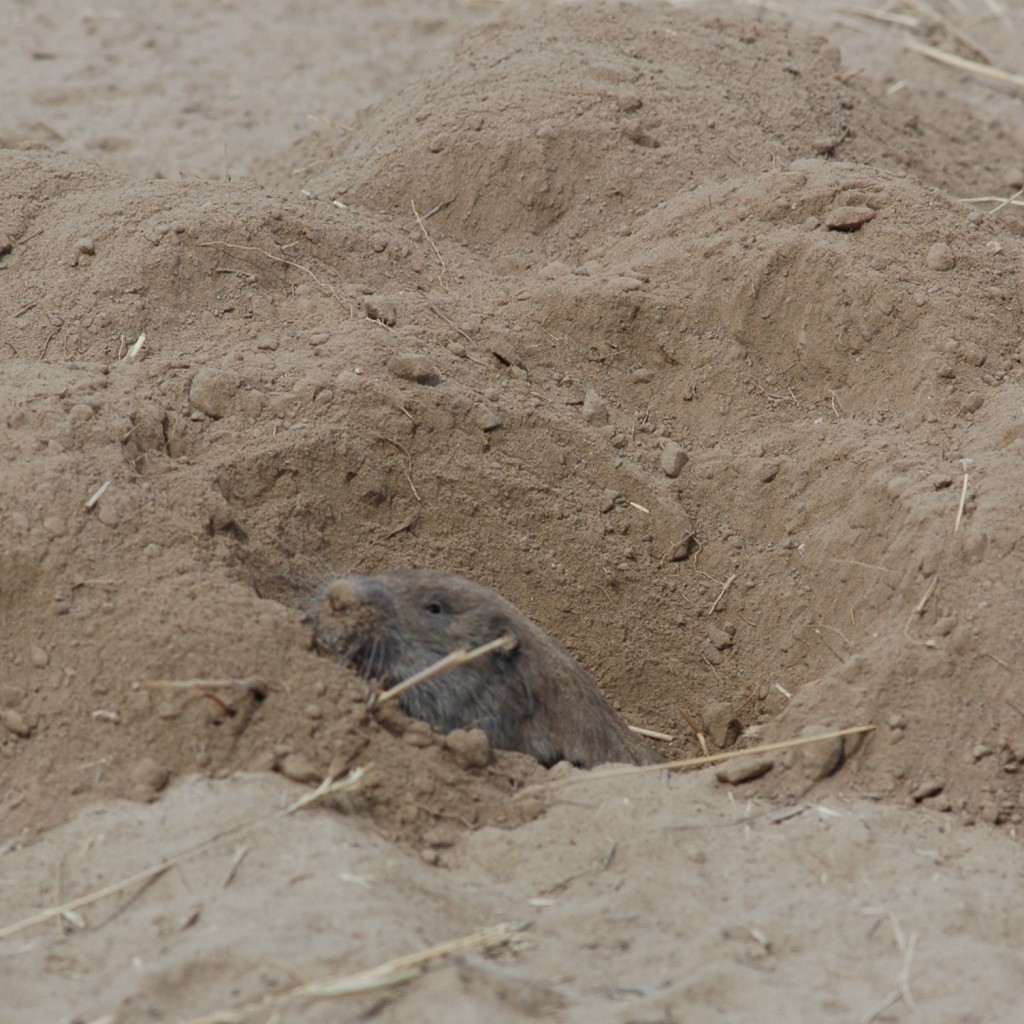 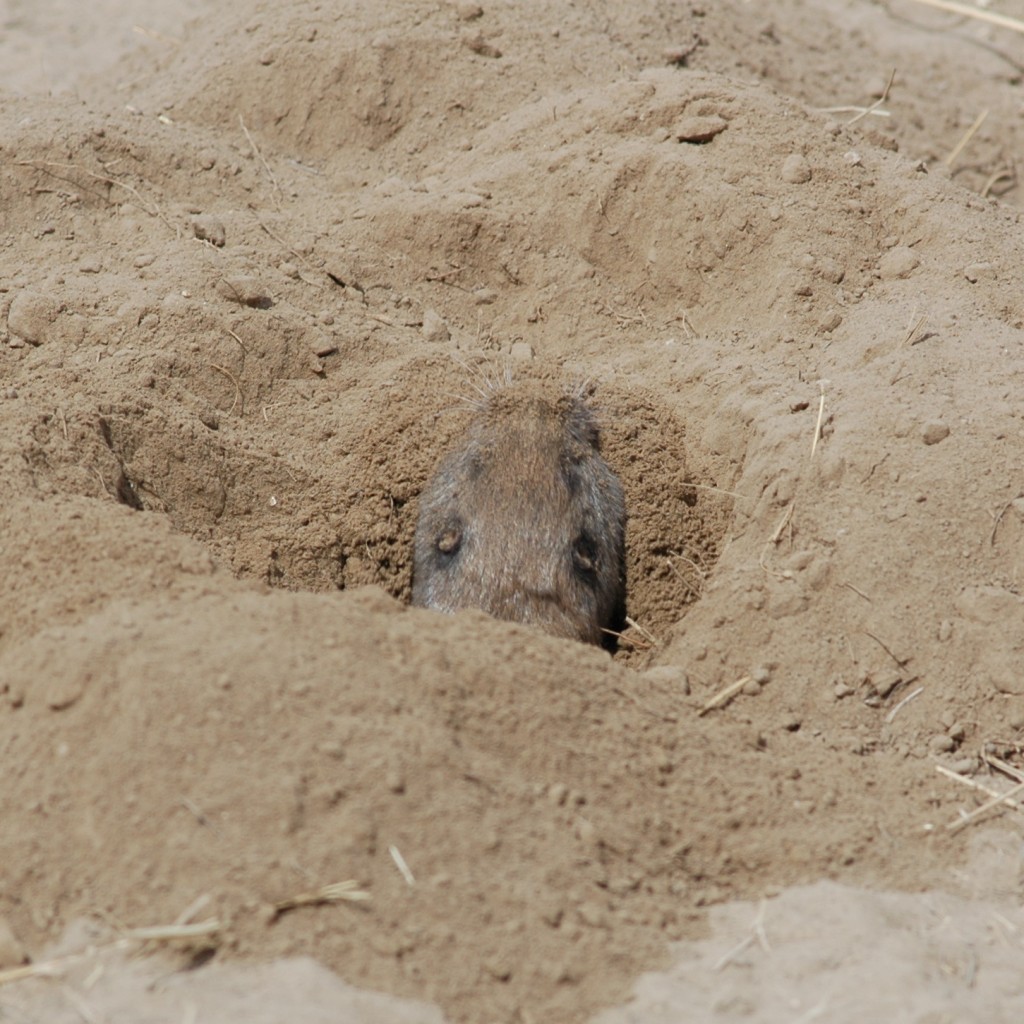 Well, not really. The object of my interest that summer day with bright blue sky was a small, dark rodent, about 8 inches in length-the Northern Pocket Gopher, Thomomys talpoides. The northern pocket gopher occurs across much of western North America, from north-central Alberta and Saskatchewan, down through the Dakotas, south into New Mexico and Arizona, then west and northwest to the Cascade Mountains. An isolated population also occurs in the Vancouver-Longview area of Washington.

Pocket gophers get their name from the fur-lined pouches on each side of their heads. These pouches have external openings and are utilized to transport food down their tunnel systems to storage chambers, where it is cached for future use. The pouches are also used to carry nesting material from the surface to their nesting and bed chambers. These pouches can be turned inside-out in order to empty the contents and for cleaning.

New World pocket gophers are members of the family Geomyidae, and are found from extreme northern South America, up through Central America and Mexico, across most of the Unites States west of the Mississippi River, and much of south-central and south-western Canada. One species is found in the south-eastern Unites States, including Florida, Georgia, and Alabama.

The taxonomic classification of pocket gophers has undergone considerable revision over the last 30 years or so. Currently, there are 39 species recognized in this family, of which 18 are found in the United States and Canada.

Pocket gophers are well-adapted for life in the dark tunnel network that they are constantly expanding. Eyes and ears are much reduced in size in order to minimize potential problems from soil particles entering these organs. They are cylindrical in shape, which allows them to move rapidly forward or backward in their tunnels. Although they have poor eyesight, the face has many extremely sensitive whiskers (vibrissae) which guide them through their dark tunnels. Their naked tail is also sensitive to touch and helps them navigate when moving backwards.

Pocket gophers have all the equipment needed for serious digging. Their forefeet are equipped with relatively long, strong, claws that cut their way through the soil. The forelegs are powered by heavy musculature in the shoulders. And if the soil is particularly hard and digging is difficult, those sharp, fast growing incisors are just the tool needed to literally chew their way through the dirt. The lips can actually close behind the incisors, preventing dirt from getting into the mouth.

All that chewing of abrasive, gritty soil causes excessive wear on the teeth. Why aren’t they worn down to the gums? Because, like incisors in all rodents, the incisors in pocket gophers are constantly growing, only much more rapidly than in most rodents. The incisors of pocket gophers can grow as much as a foot in one year; that’s about twice the normal growth rate for Norway rat incisors.

These little rodents prefer moist, loose, soil, and are most often found in lawns, gardens, pastures and other agricultural areas, and meadows and clearings in the mountains. The hills of soil pushed to surface are the spoils from the extensive tunneling that their underground life-style requires. They build an extensive system of tunnels at a depth of 4” to 12”, which consists of a main tunnel and several lateral tunnels that branch off from the main tunnel. Lateral tunnels normally end at the surface where the characteristic mounds are pushed up. Unlike mounds produced by moles, these mounds can be distinguished by the earth plug that seals the opening on the side of the dirt hill.

In areas that receive significant snow, pocket gophers tunnel under the snow in the winter, packing these tunnels with soil that they bring from their underground excavations. After the snow melts, these dirt cores, or ropes, are clear evidence of pocket gopher activity.

Food for pocket gophers consists of roots and bulbs, as well as stems and leafy material they pull down into the tunnels. The roots of dandelions and alfalfa are preferred food items. In gardens and agricultural areas they can be serious pests, especially in hay fields. We have even had the roots of a 6-foot pine tree damaged to the extent that the tree died.

Pocket gophers were the bane of my life when I was growing up on a farm in Central Washington. Their tunnels would intercept the small ditches that the irrigation water was running down and, as a result, the water would travel through the tunnels to areas where it was not supposed to go. At a minimum, this required time to plug the tunnels and re-direct the water into the proper course. At worse, it might mean getting farm equipment stuck when muddy areas were unexpectedly encountered in areas that were supposed to be dry.

Besides the shallow tunnels, which are their primary foraging areas, pocket gophers also dig deeper tunnels, down 6 feet or more. Branches off these tunnels lead to chambers, one of which is used for a nest, while others are used for food storage. Pocket gophers carry food and nesting material down from the surface or shallow areas in those fur-lined check pouches; food goes into the chambers used as larders, while nesting material goes into the bed chamber. Often, there is separate chamber for fecal wastes.

Except in the breeding season, adult pocket gophers are solitary animals, and the males aggressively defend their territories against intruders. Territories may cover several hundred square feet of surface area, although older, established females may have territories significantly larger.

During the breeding season, territorial behavior is relaxed, and females may even permit other females to enter their tunnel system. The size of the tunnel system is determined to a considerable degree by the abundance of food resources, which must be sufficient to support the female and her young. Females have litters of as many as ten young, although 3-6 are more common. Some species will produce young through-out the year if they occupy areas of high food production, such as alfalfa fields.

After about two months, the young, not yet fully grown, disperse away from their mother’s territory to find a living area of their own. During this process, mortality from predation is high as they often travel on the surface. Coyotes, foxes, hawks, owls, weasels, badgers, and snakes greatly reduce the number of juvenile animals that survive until the next breeding season. In certain instances, less than 10% of the young will survive long enough to reproduce the following spring.

Like other burrowing animals, pocket gophers contribute to a healthy ecosystem in several ways. They bring fresh mineral soil to the surface that helps promote strong vegetative growth. One pocket gopher can bring as much as 4 tons of soil to the surface in one year. Their constant digging counters the soil compaction caused by the trampling of cattle and the operation of farm, forest, and construction equipment. The tunnels provide refuges for a variety of species, including salamanders, toads, snakes, and insects.

Their tunnels allow air to and water to circulate through the soil, which also benefits growing plants. The tunnels store water from melting snow, there-by reducing spring flooding and allowing the gradual release of ground water into streams through the summer months. Their toilet chambers even act as fertilizer deposits, further enhancing the growth of plants.

There is no question, however, that pocket gophers can be a nuisance in gardens and cultivated fields, even to the point of causing economic damage. If you feel you must remove some pocket gophers, check with the local office of your state fish and wildlife agency. Certain control methods may be illegal in some states. For example, traditional pocket gopher traps that grip the body are not legal in Washington State. In addition, the Mazama pocket gopher population in the South Puget Sound area of Washington is state listed as Threatened and has been proposed for Federal listing as Threatened by the U.S.F.W.S. The Mazama pocket gopher is especially vulnerable as it spends more time on the surface than other species.

I watched my little friend on the edge of the lawn for about 20 minutes as he continued to build his miniature mountain. When he had completed the mound except for the exit hole, he (or she) pushed up the last of the loose soil produced by recent digging activities, forming the characteristic plug in the hill. Surface activities completed, I folded up my lawn chair and went off in search of other wildlife activities.

About Bob Tuck:: Bob grew up on a farm in the Yakima Valley of Washington and has been a fish and wildlife biologist since 1977. He is the principal at Eco-Northwest and has also done environmental education. 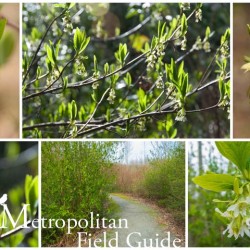 One of the first plants I placed in my new yard this past fall was the Indian Plum. The reason it received this honor was because it is the earliest plants to bloom in the spring. Walk through parks or 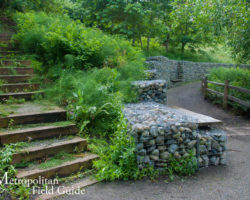 Travis Beck Travis Beck is author the newly published Principles of Ecological Landscape Design, which I recently reviewed. He kindly agreed to an interview so I could ask him some questions about his book, what inspired him and his