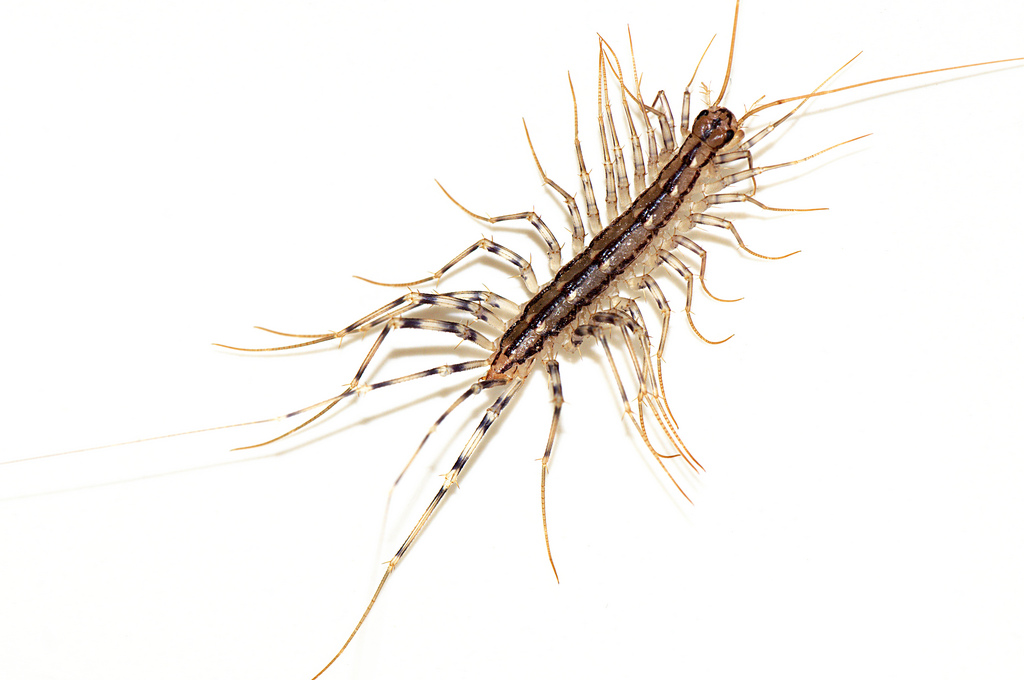 On Being Misunderstood:: House Centipede

It takes barely a moment of reflection to realize that centipedes are, in fact, innocent. They just have an unfortunate combination of features that scares us. To begin with, they are too fast for our comfort. According to the 1976 Guinness Book of World Records, the house centipede is the world’s fastest arthropod — about16 inches per second. House centipedes also seem to be unreasonably large. Although the body of a fully grown adult is only an inch and a half long, its threadlike antennae extend forward and its long legs extend backwards for a disturbing total length of about five inches. And their appearance is unpleasantly alien. An adult has 15 pairs of color-banded legs, three bold stripes running the length of its slender body, waving parts, mysterious purpose, and this alarming habit of leaping into view.House centipedes always seem to arrive suddenly. They dart into view with legs rippling and antennae waving. They run and stop, run and stop again. Humans snap to attention. Even gentle nature-loving people sometimes jump up to kill a centipede. The American author, William S. Burroughs, went so far as to say that a person who would stroke [pet] a centipede was a traitor to the human race.

House centipedes are sometimes called “hundred leggers” or even “thousand leggers.” That’s total exaggeration. Even the name centipede is misleading since it means hundred feet. An adult house centipede has just 30 legs. The number of legs alerts us that centipedes are not insects (which are all hexapods with six legs). Centipedes are myriapods, in the suborder Myriapoda, a group of many-legged arthropods that also includes millipedes and some obscure soil-dwellers.

House centipedes are not born with 30 legs. They start out with eight, one pair on each of four body segments behind the head. As they grow into successive stages, centipedes shed their skins like caterpillars. Each growth stage is bigger than the last and has a few more leg-bearing segments — four, then five, seven, nine, eleven, thirteen, and ultimately fifteen pairs of legs. The legs increase in length from front to back. The last pair is not used for locomotion; they are long and thin and may act like a pair of rear antennae. The first pair of legs is on the body segment just behind the head and functions as mouthparts. They are modified to deliver poison and are called poison claws; they are the centipede’s weapons.

House centipedes are nocturnal hunters that roam through our homes at night searching for prey. They eat spiders, flies, silverfish, moths, roaches, termites, bees, and wasps. So many of our enemies are on the centipede’s menu, you would think we would welcome them. They capture victims by pouncing on them and snaring them with their long legs, typically envenomating a victim to kill it, and then holding it with front legs to eat it. A scientist once reported watching a house centipede hunt at a light; it caught and killed a fly with a bite to the thorax, then killed another fly while still holding the first. A centipede can hold at least four victims in some of its many legs, to eat later, while it catches and eats others. They also have been seen beating on spiders with their front four or six pairs of legs. 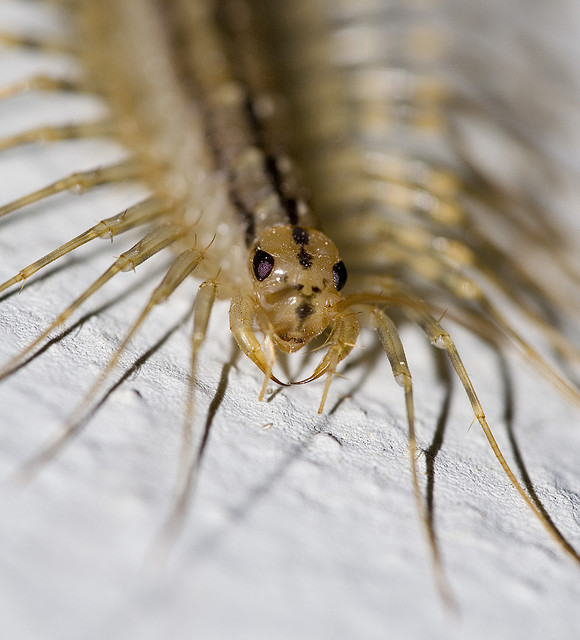 It is time for me to admit to a fondness for cobweb spiders; I allow them to occupy a few corners of my home unmolested so I can watch them, and they catch and eat insects in return for the favor. It was inevitable that a centipede would one day meet my bathroom spider. The battle was short. The centipede won. I did not stay for the feast, but another scientist long ago described watching a centipede eat a spider: it ate the abdomen first in small bites, then it detached and ate each leg in turn, and discarded all eight spider feet. Picturing this scene can be made a little more ghastly if you know that centipedes wait for prey in silent stillness but while eating, they flutter their legs.

After dining, centipedes clean themselves. They have a grooming structure near the mouth. It’s a groove covered with hairs through which antennae and legs can be passed to remove dust and dirt. They clean their appendages from the base to the tip in a meticulous and unchanging order, starting with the antenna then legs on one side of the body, from front to back. After one side is done, they do the other. And they keep track; if interrupted while grooming, the centipede resumes where it left off. If a leg is missing, the centipede will try to clean it when its turn comes. It is inaccurate and unfair to call house centipedes dirty.

The North American house centipede is a Mediterranean native that has become a synanthrope in Europe, Asia, and North America. It can be found throughout the United States. It is one of a few thousand kinds of centipedes that we know of, and the only one we know of that can complete its entire life cycle indoors. Its life span is about three years, so it is theoretically possible to get to know individuals. Some people keep them as pets, with red lighting to illuminate nocturnal activities. If you are tempted to get to know a centipede better, please look without touching – for two good reasons.

First, although centipede poison claws are rarely able to penetrate human skin, that might not be absolute, and they will try to bite if they feel threatened. Allergic reactions and infections are possible.

Second, house centipedes sometimes defend themselves by abandoning legs in a defensive strategy called autotomy – like when a lizard’s tail breaks off. Dismembered legs thrash and twitch after being cast off, cleverly attracting the attacker’s attention to the leg while the centipede gets away. Scientists lament that it is difficult to collect intact centipede specimens for research because they are such fast runners and their legs keep falling off. Centipedes are able to begin repair right after a leg comes off; a drop of fluid is exuded and hardens quickly to form a kind of organic suture. The legs grow back, but replacement legs may be short or imperfect; it is better for the centipede to keep its original legs.

Centipedes do most of their hunting, fighting, cleaning, eating, and leg dropping at night while we sleep and the lights are off. They prefer to stay in dark places during the day. It is probably better that way for all of us. I close with a haiku I wrote for the occasion.

Sudden Centipede!
We stop and watch each other
Both ready to run. 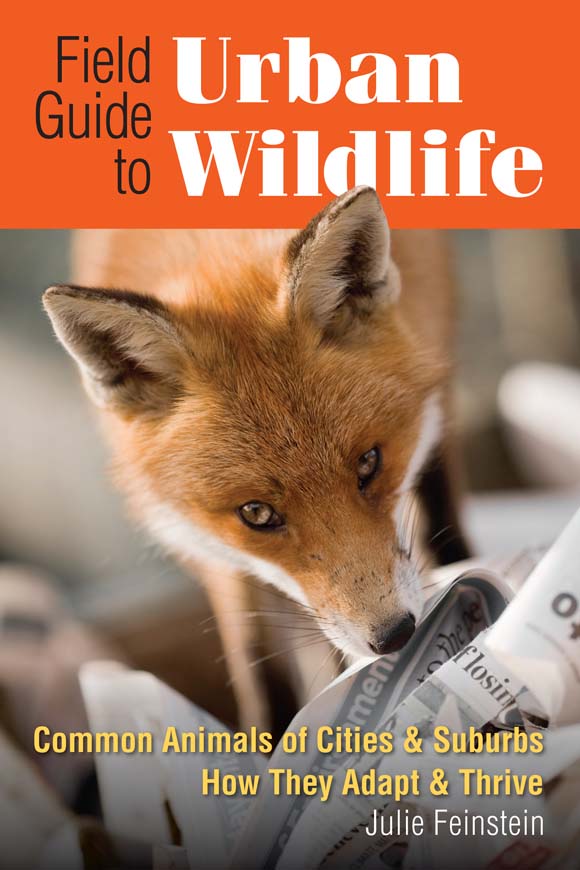 About Julie Feinstein – I am a Collection Manager at the American Museum of Natural History. I live in New York City. I write a blog about urban wildlife, with updates every Sunday. Click here to visit my blog: (http://www.urbanwildlifeguide.net)

I recently published the book, Field Guide to Urban Wildlife.