This is the third post in a short series about the importance of plants in the arts. The first post was Plants in Poetry and looked at the various ways plants were used as inspiration, symbolism, morals and as an appreciation of nature. The second was Plants in Paintings:: Vincent van Gogh which discussed the importance of plants and nature to van Gogh’s work as well as his life. In addition to poetry and paintings, plants have played a significant role in design. Following are examples of the important role plants have played in two iconic companies.

Louis Comfort Tiffany was heavily inspired by nature and that was reflected in his work, not only in subject matter, but in the use of colors. According to the Morse Museum of American Art, his “aesthetic was based on his conviction that nature should be the primary source of design inspiration. Intoxicated by color, he translated into glass the lush palette found in flowers and plants.” One of Tiffany’s best known glass are the flower lamps, many which are what is called ‘transition to flowers’. These lamps feature a globe-shaped shade with geometric patterns transitioning into flowers. Tiffany’s influence of nature didn’t stop at flowers as many of these lamps also feature wildlife including dragonflies, peacock feathers and even spider webs.

The Tiffany & Co. website describes the role of nature on the design of his glass.

With nature as his inspiration, and glass, colored gemstones and enamel as his primary tools, this skilled artisan created a world of beauty that has lost none of its ability to charm and fascinate. Mr. Tiffany embraced nature as a decorative theme with the same passion that drove the 19th-century industrialists to build railroads, factories and cities, which forever changed the landscape. To counter the dehumanizing effects of steel and concrete, Mr. Tiffany placed his stained-glass windows, glass domes and mosaics in building lobbies, banks, terminal waiting rooms, hospitals, department stores and hotels. He believed his luminous masterworks depicting lakes, hills and flower-filled gardens restored the human spirit and sustained the soul.

In addition to his glass, nature also influenced his jewelry collections and he used many plants in his designs including blackberry, grapes, wild carrot flowers and even dandelions. The gemstones and colors in the jewelry he chose were directly influenced by what he saw on his countryside walks. “A necklace of opals, gold and enamel designed in a grape motif recalled the arbors of New England in the fall.”

It’s perhaps one of the most iconic prints in the textile world. Marimekko’s poppy design, or unikko print is the Finnish company’s unique creation. In addition to textiles, this pattern comes in many colors and can also be found as coasters, baby bottles, dishware, notebooks and placemats, in fact this pattern can be found in several places around my own home. Despite being the iconic imagery now associated with Marimekko, the design has an interesting history and had the owner had her way, it would never have been created. Armi Ratia declared there would be no floral designs in her company, but one of her designers, Maija Isola challenged the idea of being told what to do by creating the unikko design. It was instantly popular although it took awhile for such bold, bright designs to catch on in the 1950’s.

Due in part to Maija Isola and unikko, Marimekko has become a successful company owned and run by women. It was a mainly women run company even back in the 1950’s in a male dominated world. Today, Finland is a progressive country for gender equality being the first European country to allow women to vote and the last president was a woman.

Just as plants influenced great poets and classic painters, so they have influenced contemporary designs as well. Are there other design examples you can think of which feature iconic plant design?

This video discussion took place at the recent ICLEI Urban Nature Forum in Belo Horizonte, Brazil this month and discusses the value of urban biodiversity and how to bring that diversity back to the cities. It's presented by the Stockholm Resilience Centre. Oliver Hillel 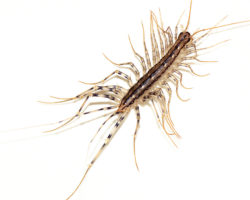 On Being Misunderstood:: House Centipede

(House Centipede by Flickr user theilr)   On Being Misunderstood is a new feature at The Metropolitan Field Guide which will look at the variety of flora and fauna we live with which are too commonly misunderstood. From plants to wildlife, many of