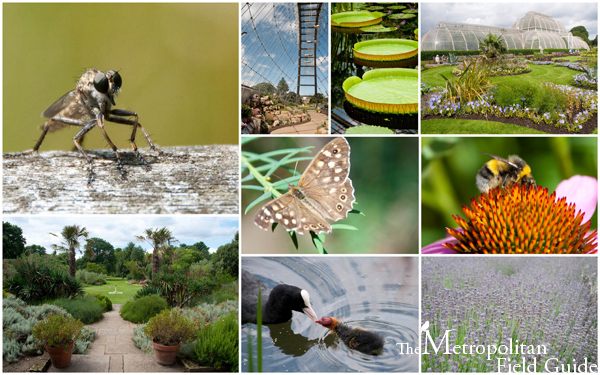 For anyone with an interest in botany and horticulture, Kew Royal Botanical Gardens in London is like the holy grail. Started in 1759, this garden is now over 250 years old and is full of history, research, conservation, wildlife and a massive collection of plants. The entire garden is now 132 hectares (300 acres) in size, a rather dramatic change from the original 9 acres. It has World Heritage status and contains the worlds most diverse botanical collections. This is where ‘Mad’ King George spent much of his ‘illness’ and the palace, built in 1631 is now open to the public. History can also be found in the gardens where you can step back in time and visit a nosegay garden, which was an apothecary garden or the Queen’s Garden which contains plants exclusively grown in Britain during the 17th  century. Queen Charlotte’s cottage was a gift to the Queen in 1761 and stayed private until Queen Victoria gave it to Kew on the condition that the grounds and their bluebell woods be kept in their naturalistic state . This part of Kew was a bird sanctuary and was the beginning of the Conservation Area in Kew. Those familiar with the history of landscape architecture would recognize the name of Capability Brown, one of the designers instrumental in creating and recreating Kew Gardens.

There are many gardens and glasshouses to visit in Kew Gardens. Stepping into the Palm House takes visitors right into Africa, the Americas or Australasia featuring plants native to these regions, often of cultural or economic importance. The Temperate House brings visitors to South Africa, Asia, New Zealand and other temperate regions again including economically important plants but also endangered island species which are being propagated for reintroduction to their native homes. The Evolution House demonstrates the long history of plant development and features plants such as horsetail and giant club mosses, estimated to be 300 million years old. The Davies Alpine House, one of my favorites, contains a variety of plants that may never been seen by most people including plants from Arctic shores or other alpine locations very difficult to reach. These houses are an amazing way to visit a variety of global regions and get a sense for their native plants in a way that may not otherwise be possible short of visiting each of these regions.

In addition to the glasshouses, there are dozens of outdoor gardens of all manner of themes and locales such as a woodland garden, lilac garden, Mediterranean garden, rose garden, bamboo garden, rhododendron garden and on and on. Of course there is also an impressive arboretum found throughout the garden. Perhaps the most interesting part of Kew Gardens to a wildlife gardener however, are those areas focusing on wildlife. There is a wild side to Kew Gardens where waterfowl breed in the ponds, butterflies forage and dragonflies flit around. A large lake contains several large, wooded islands which create refuges for wildlife and a bridge crossing the long lake provides views of stunning water birds such as the great-crested grebe or the red-crested pochard. The lake also attracts dragonflies and damselflies and 14 species have been recorded at Kew. Additional wildlife found around the lake includes frogs and newts. The Conservation Area contains native plants, fallen logs, a woodland, meadows, wetlands and ponds. Butterflies and other insects are abundant here as well as small mammals such as foxes and badgers. You can also find a stag beetle loggery and a demonstration badger sett to explore. Kew Gardens has recorded 28 species of butterflies and 128 species of birds.

Kew Gardens, and other botanical gardens are important assets not only to their immediate community, but to the world. They are excellent places to learn about the native plants of regions throughout the world and be transported into those regions to get a sense of place. This helps us to be better connected to other places in the world and perhaps understand them better by understanding the plants they rely on culturally and economically. At the same time they provide important habitat, often in heavily populated areas, not only with designated habitat gardens, but through the abundance of flowering plants which provide fuel for pollinators. Lastly, nearly all museums and zoos provide a significant amount of conservation work behind the scenes by saving and propagating plants, research, classification and recording data.