Just when I thought I’d seen the last of the lady beetles on my balcony this year, I got more than I ever expected. I’d had a good time watching a couple dozen lady beetles grow from larvae to adults and wrote about it recently: The Life of the Lady Beetle. Earlier in the week, on a sunny afternoon, I noticed a number of lady beetles landing on the window of my apartment. So many landed and flew away that I went out to the balcony to investigate. I was surprised to find dozens upon dozens of lady beetles crawling over not only my balcony, but the entire side of my six-floor apartment building. For two hours, dozens, perhaps even a hundred or more, swarmed around my building and crawled over every surface of my balcony.

As I took photos I noticed there was more than one species. Certainly, many appeared to be the Asian Spotted Ladybird Beetle, but there were some that definitely were not, including one that may be a Two-Spotted Ladybird Beetle and another that could be an Ashy Gray Ladybird Beetle. The others were similar enough that my non-expert eye could not tell if they were different species or just variations of the Asian Lady Beetle. In addition to the ladybird beetles, there were also a couple other types of beetles as well as many large flies. All of these types of insects I see regularly, but not in these numbers and all together. After the first two hours they started to disperse, although several could be found on the balcony that night and the next morning. The next day, around the same time the swarm started again, perhaps a little less in numbers and again, a few could be found that night.

The Asian Spotted Ladybird Beetle or Asian Lady Beetle, is an introduced species and is well known to swarm in the late fall, looking for somewhere to hibernate for the winter. Often they make their way indoors where they quickly go from being a beneficial insect to being a pest. Native lady beetles also hibernate, but they do so outdoors, only the Asian Lady Beetles are known to hibernate indoors. The hibernating Asian Lady Beetles do not eat during hibernation and instead live off of their stored fat. If they get inside however, they can create a mess because they emit a foul odor and a yellow fluid that can leave behind stains.

When they swarm they are attracted to the sunny side of light colored buildings, which perfectly describes the side of my building. The swarms don’t happen annually, some years have larger populations that swarm, but other years can be very minimal. Unfortunately I couldn’t find information about different species swarming together let alone with different types of insects.

Below is a collage of some of the various lady beetles and other beetles I found on my balcony during the last two days. 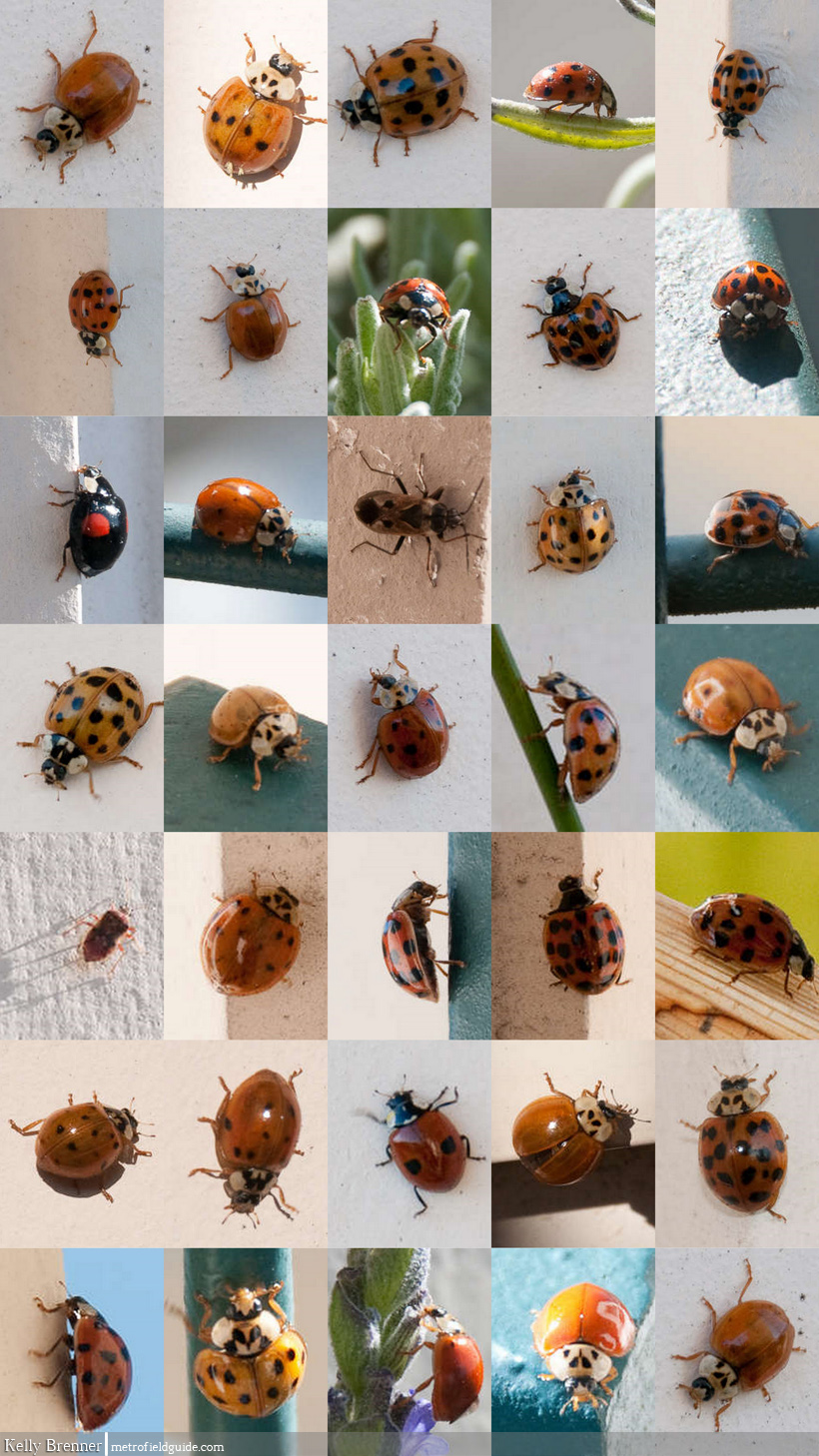 Lady Beetle from the Swarm

The Life of the Lady Beetle:: The Metropolitan Field Guide