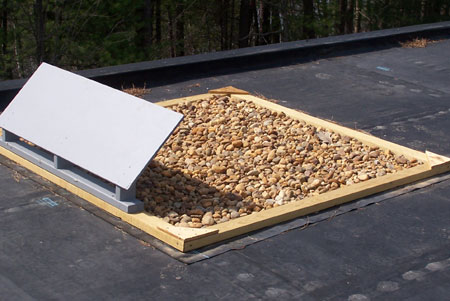 The Nighthawk is a bird that used to be abundant throughout the US but has been in decline in recent years. There are many potential reasons for this, among them is a change in the construction of roof tops. Nighthawks have been known to nest on roofs with gravel tops, but since most roof construction is now tar, they no longer nest on roofs. There are several reasons for this:  the heat of black roofs, the flatness causes eggs to roll around, and black roofs provide no camouflage. One project, in New Hampshire, is conducting a study to see if they can bring the Nighthawks back to nesting on roofs with gravel patches. The New Hampshire Audubon has taken on this initiative and they are calling it Project Nighthawk.

I researched a great deal about Nighthawks for my comprehensive design project and was interested by this project. I wanted to learn more so I sent some questions to the New Hampshire Audubon and they were kind enough to answer.

Why did this project begin?

Nesting nighthawks have disappeared from many New Hampshire towns; in the few towns where they remain (primarily Concord and Keene), their numbers have dramatically declined. Biologists are trying to determine if the loss of urban nighthawks is linked to the disappearance of pea stone roofs. New Hampshire Audubon initiated Project Nighthawk in 2007 to investigate the potential for restoring nesting nighthawks by placing simple gravel “nest patches” on flat rooftops in Keene and Concord. If the absence of nesting sites is a factor in nighthawk declines, biologists hope the gravel patches will lure the birds back.

What is the interest from building owners?

We’ve had very positive response from privately owned and publicly owned building owners. Most building owners enthusiastically support the project by allowing us to construct nest patches on their rooftops.  We have had only a couple instances where we requested access to a roof and were denied.

How many patches on how many different buildings do you have setup now?

There are currently 47 gravel patches in NH. Project Nighthawk sponsored patches: 31 buildings and a total of 40 patches (those in Keene were spear-headed by the Ashuelot Valley Environmental Observatory). Independently installed patches in the state: 6 buildings and 7 patches (these are privately constructed and the owners registered their patch(es) with Project Nighthawk).

What percentage of those have been used?

We do not have any evidence that the nest patches have been used, however there has been consistent nighthawk activity over several of the patches since the beginning of the project.

What’s the success rate for the chicks?

We observed a nighthawk pair NOT on a nest patch for the past 3 years ( they nested on the ground at an industrial site). In 2007 they successfully fledged one chick, in 2008 two chicks were fledged, in 2009 two eggs failed due to ground flooding from heavy spring rains and a second nest attempt was unsuccessful for undetermined reasons (the pair re-nested on a rooftop that we did not have access to).

Have you had other species, such as Killdeer make use of the patches?

There has been no evidence of other species nesting on the patches.

Have you found any evidence of predators?

Crows have been observed near some of patch the locations but we’re unable to evaluate predation without a nest. Ground-nesting nighthawk may suffer predation from mammals such as raccoons and feral cats.

Are the locations planned based on surrounding habitat or are you trying them everywhere?

Our initial patch experimentation efforts are concentrated in Concord and Keene where nesting populations of nighthawks still remain. If we have a building owner who is interested in putting a patch on their roof we will evaluate the site to determine if it is appropriate for a patch.  Things we look at are:  has there historically been nighthawk activity in the area, is the roof flat or sloped, are there parapets  along the roof edge, is there enough area to accommodate a 9’x9′ patch, is there accessability to shade, will the area be minimally disturbed.

What types of settings are the buildings in? Urban, industrial, suburban?

Mostly urban although we have a couple patches that are located on school rooftops in more suburban areas.

And is there any correlation of their location to successful nesting so far?

We are not able to determine that at this time.

Are there any further considerations when considering the roof such as parapets, trees or walls for shade, reflective heat, cover from predators, proximity to water, etc?

Parapets, shade, roof accessibility,cover from heat and predators are all important factors when evaluatinga site for a potential nest patch.  We have not focused on proximity to water as such, however the Merrimack River runs through downtown Concord.

Have you experimented with different elements such as shade, wood, small plants, etc?

Most of the patches have some kind of shade structure, such as a roof element (i.e. an a/c unit) or manmade from plywood atop bricks or cement blocks.  The patches themselves are all constructed out of 3/8″ or 1/2″ fractured or rounded pea stone.  Theroofing substrates vary such as black rubber, white rubber, gray rubberor large river washed stone. Some of the patches have a frame around the pea stone.  You can see examples of several patches on the Project Nighthawk website:
http://www.nhbirdrecords.org/bird-conservation/Nighthawk-main.htm

Have you incorporated any of the patches with a green roof?

Not at this time.

How many years do you plan to continue the project?

We hope to have funding to continue the initial experiment for 5 years to determine if nest patches are successful in luring nighthawks back to the area. If there is evidence of patch use, we plan to continue and expand the project. 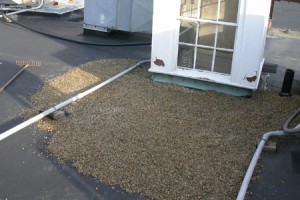 via:: Project Nighthawk (Sulloway & Hollis, Capital Street, Concord, NH. Fractured peastone on top of black rubber. Nest patch placed in center of roof, with no parapet, and next to cupola for shade. Photo by Stephanie Parkinson.)

All About Birds:: Common Nighthawk

Audubon at Home:: How to Help Nighthawks (PDF)

Birdscope:: Common Nighthawks No Longer Common: Can corporate partnerships bring them back?