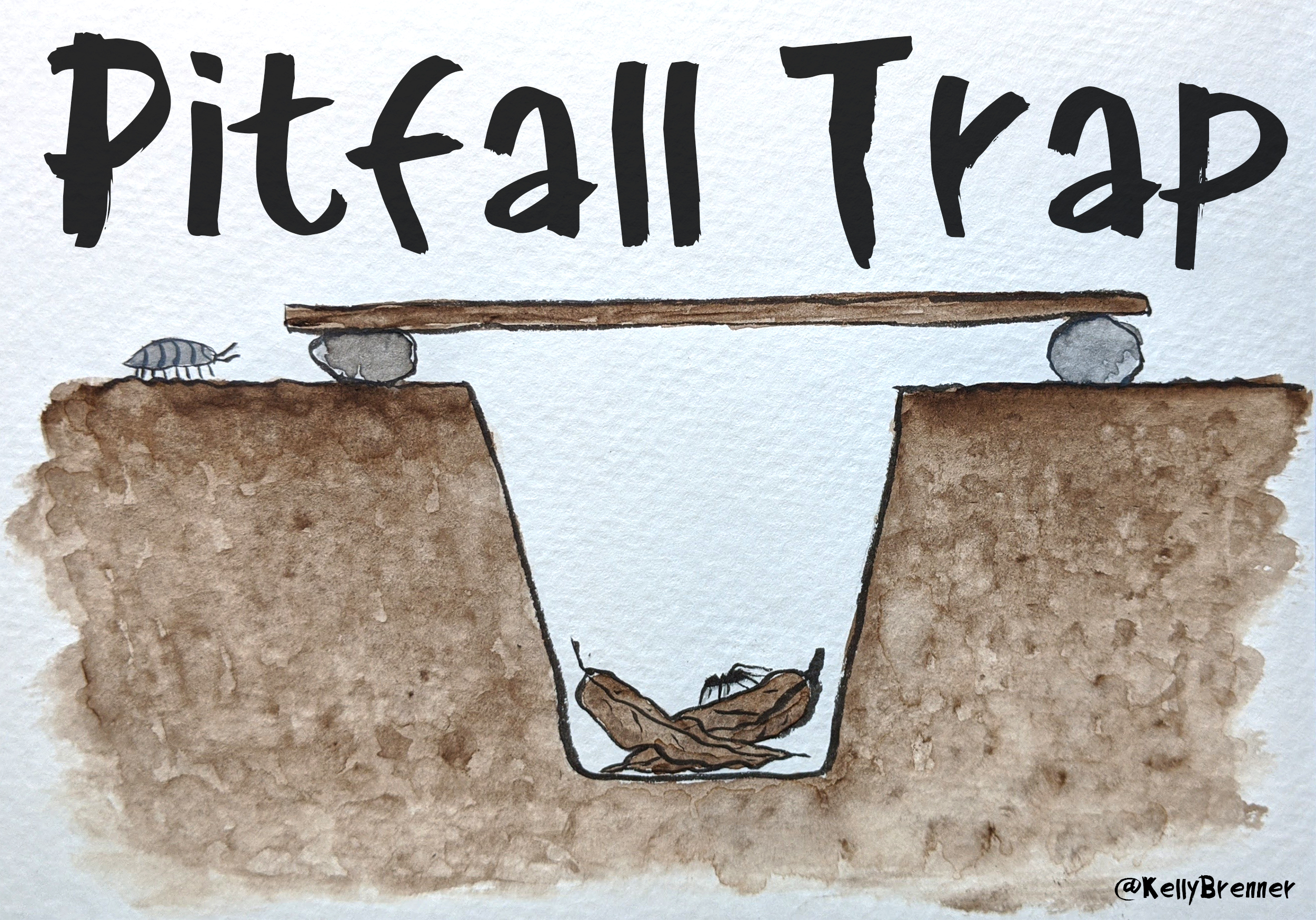 How to Make a Pitfall Trap

While bees and butterflies may catch our attention as they fly around our flowers, there is a great deal of activity far beneath them vastly unseen on the ground. Hidden below the plants in the leaf litter and soil is an entire overlooked kingdom of invertebrates. We sometimes encounter them when we pick up a rock or if we get low and poke around, but they live largely unseen. While I do recommend crawling around on the ground to investigate what’s living there, there is another way to find out what invertebrates are lurking around, and it’s easy to set up with materials you already have on hand.

CONTAINER: The first thing you’ll need is a container. Repurposed food containers like yogurt cups, jars or other cup-like things will work. It needs to be deep enough that invertebrates can’t easily crawl out of it, but it doesn’t need to be large.

COVER: You’ll need something large enough to cover the cup and protect it from rain and debris falling inside. This can be a piece of wood, a tile or anything that can act as a roof.

ROCKS: To hold the cover over the container, you’ll need a few small rocks.

SHOVEL: You’re going to dig a small hole the size of your container, so any hand held shovel will do.

CHOOSE LOCATION: The best location is hidden away under plants, exactly where the invertebrates find shelter from predators. Avoid open areas like lawns where there is no low growing plant cover or debris. Also avoid areas that spray pesticides because most kill indiscriminately and you’re unlikely to find many invertebrates.

DIG: Using a shovel, dig a hole the size of your chosen container. You’ll want the top of the container to sit even with the surrounding soil, not below or above.

PLACE CONTAINER: When your hole is ready, put the container inside. Make sure it sits in so the top is even with the soil. You don’t want it too low or the soil will fall in, nor too high because the invertebrates won’t fall in. Keeping it flush is very important. Throw a couple of leaves in for the invertebrates to hide under while they’re trapped.

PLACE COVER: Get your small stones and place them around the container and set your cover on top. There should be enough room between the soil and cover for invertebrates to walk under. Don’t place so many stones that the invertebrates can’t get in.

LEAVE: Once it’s set, let it sit overnight. Be sure to not leave it for longer because you don’t want the invertebrates to be trapped and die, or create an easy banquet for predators.

CHECK: Look in the morning before it gets warm and overheats your invertebrates. Remove the cover and look in your container to see what invertebrates have fallen in. To take a closer look you can use a magnifying glass or a hand loupe, or if you have a microscope, place the invertebrates in a large petri dish with a lid and take them inside to view.

TIPS: If you have little or no success, you can try baiting the trap with piece of ripe banana. To attract dung beetles, you can even add pellets from rabbits or other herbivores.

IDENTIFY: There are many guide books to backyard invertebrates, a few are listed below and I’ve included a few invertebrates to look out for as well. An excellent resource is BugGuide, a website managed by entomologists who help identify ID requests.

DOCUMENT: Make notes or take photos of what you catch for later identification or to contribute your records to citizen science. Take your notes to the next level and try sketching your invertebrates and keep a nature journal!

RELEASE: When you’re finished observing your invertebrates, release them back outside where you found them.

TIP: Try setting out your pitfall trap regularly throughout the year to see what different invertebrates show up during the different seasons and try different locations.

There are a wide variety of invertebrates you may encounter in your pitfall trap, and not all of them will be insects. In addition to those listed below, invertebrates likely to fall into the trap include spiders, mites and harvestmen, centipedes and millipedes, silverfish, ants, worms and springtails, among others.

Roly poly and pillbug, these have many common names and are one of the most familiar of our backyard invertebrates. They are not insects however, they are isopods which are crustaceans. They like it where it’s moist because they breathe through special appendages that diffuse gas through water, a remnant of their previous life in the sea.

The woodlouse defense is to roll up into a ball (not all can do this), but other invertebrates still prey on them including centipedes, beetles and spiders.

Unlike the vast majority of insects, earwig mothers actively care for their offspring, first by licking the eggs to prevent any mold growing on them, then tending to the nest where the nymphs stay until they have molted a couple of times.

Earwigs are omnivores and feed on plant matter as well as pests and are actively mainly at night. They are thigmotactic, meaning they like to be in contact with surfaces which is why they hide under pots and other things on the ground.

As the name suggests, these large beetles are mostly nocturnal and during the day hide under leaf litter or logs. This is just one of many ground beetles that prowl around unseen during the day. Others include the long faced snail eating beetles, gazelle beetles, carrion beetles, stag beetles and rove beetles.

Many ground beetles are carnivorous, like the snail eating beetles which have elongated heads to reach inside snail shells. Others are detritivores consuming animal dung and other decaying material. Some, like rove beetles, are omnivorous feeding on other invertebrates, fungi, decaying material and even carrion.

These fast spiders spend most of their time on the ground and don’t spin webs. Instead they chase their prey down and pounce to catch them. Wolf spiders are found in most habitats and are often dark and mottled to blend in with the ground.

After mating, females spin a sac around their eggs and carry it with them under their abdomens. The spiderlings hatch and once they leave the egg sac, they ride around on their mother’s abdomen.

Wolf spiders have excellent short range vision for detecting moving prey and can be identified by their eye arrangement. Four small eyes line the lower part of their face while a pair of large eyes sit over them. Another large pair are behind the front facing eyes on top of their head.

There are many good guides for large regions, and if you’re lucky you may have a more specific regional guidebook. 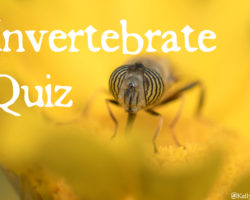 One of these things is not like the other...but which one? Once you think you know, look below the photo for the answer. Click and drag on the green below to highlight the text and reveal the answer. A, B and C 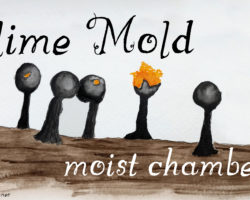 How to Create a Slime Mold Moist Chamber

Searching for slime molds in the forest is a lot of fun, but what if you could bring slime molds to your desk and watch the fruiting bodies develop? Creating a moist chamber for slime molds, also known as Myxomycetes,