A new feature on The Metropolitan Field Guide will be a video post every other week. There are a lot of great videos out there about urban wildlife, urban biodiversity and many other topics related to the design of urban wildlife habitat. Some are art films while others are documentaries, lectures and discussions.

To kick off this feature, the first video features the Congress Avenue Bridge Mexican free-tailed bats in Austin, the largest urban bat colony in North America. The bats leave the crevices at dusk every night from March through November while hundreds of people line up along the bridge, shores and take river cruises to watch the bats swarm away from the bridge. This city has embraced the bats and as a result it has become a big tourist attraction and a well-known urban wildlife spectacle. This video is a clip from the BBC documentary series titled “Human Planet“. 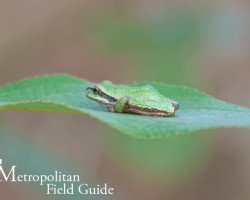 Common Name: Pacific Chorus Tree Frog Scientific Name: Pseudacris regilla Family: Hylidae or Pseudacris (under debate) The most widespread and abundant frog in the Pacific Northwest, the Pacific Tree Frog is also known as the Chorus Frog because they are one of the few frogs in the