Death, loss, separation and abandonment – the many symbolisms of one flower

The story of the red spider lily begins with a beautiful autumnal scene in late September during the Buddhist holiday of Ohigan. It’s this period of time just before the autumn equinox, that has given rise to one of the most fascinating folklores of any flower in the world. In Japan, Ohigan is a time to return home to visit graves and pay respects to ancestors. It also happens to coincide with the brief flowering time of the red spider lily (Lycoris radiata), which unusually blooms in the autumn. Because of the flower’s association with Ohigan (お彼岸) and the autumnal equinox (彼岸), it’s known in Japanese as Higanbana (彼岸花).

The flower’s autumnal bloom is not the only unusual thing about its appearance. This lily blooms well before the leaves come out. A cluster of bright red, spidery flowers with long stamens blaze atop a slender green stalk, creating a red wash over the landscape. The red glow quickly fades as the petals shrivel up, leaving the plant bare. The leaves then emerge, bringing life back to the plant once more before they too turn brown and the plant returns to the soil, dying a second time.

This curious growth habit was explained in a Chinese myth. The sun goddess Amaterasu assigned two elves (or fairies) to guard the flowers and leaves independently. Mañju guarded the petals while Saka guarded the leaves, always knowing about the existence of one another, but forbidden to meet. Curiosity drove them to defy Amaterasu and once they finally met they fell in love. Amaterasu punished them with a curse to never meet again and so now Saka’s leaves only come out once Mañju’s petals have died. They live in eternal separation. Another name for the flower is ‘Mañjusaka’ in Chinese and ‘Manju-syage’ in Japanese.

A flower of many names

But these are far from the only names for the red spider lily. In Japan, this flower has over 1,000 different names. Many of those names relate to the unique folklore of the flower, which is multifaceted. Many (if not most) of the names, are associated with death and the reasons are interesting.

During Ohigan, when the red spider lilies are in bloom, they are a very common sight in graveyards, but they are not found around tombstones because they are left as memorials. The actual reason lies in the interesting botany of this plant and is far more macabre. The entire plant, from bulb to flower, is poisonous.

In historic times in Japan, human bodies were buried directly in the ground and disturbance by moles, foxes or other animals, either burrowing or scavenging, was a common problem. To ensure the graves were left alone, people planted the poisonous red spider lilies over buried bodies to deter animals. Graves and death were soon associated with the red spider lily, earning it the name of ‘death flower’ and the even darker, ‘corpse flower’.

In addition to graveyards, the method of planting the poisonous lily bulbs as a form of animal control extended to riverbanks and agricultural fields like rice paddies.

A common superstition around the flower was that to pick one and bring it home would cause your house to burn down. As with many superstitions and myths, this may have been a way of scaring children to prevent them from touching the poisonous plant.

Because the lilies were planted around graves, when the red flowers bloomed the same color of blood, they were thought to have drawn in the blood of the dead, further tying them to death. And as they swayed in the breeze, some thought they looked like ghosts, giving them yet another name of ‘ghost flower’.

The connection of the flower to Buddhism is more than just the coincidence of it blooming during the celebration of Ohigan. One of the few names not associated with death, the flower is also called Manjushage (曼殊沙華), which comes from Buddhist scriptures. The Manjushage is a heavenly flower that doesn’t exist among us, but the red spider lily was planted by monks to represent it and so associated with Buddhist temples. There are also white spider lilies, which tend to more commonly be known as Manjushage.

‘Higan’ has a further meaning than just the holiday to honor ancestors. In the Buddhist Heart Sutra, higan means ‘the other shore’, referring to the mythical Sanzu River. Spirits cross this river to reach enlightenment so it’s often seen as symbolic of crossing over into death. Spider lilies grow along the banks of the Sanzu River and greet the newly departed spirits.

In another Buddhist text, the Lotus Sutra, Diyu is the realm of the dead, or hell, and red spider lilies are said to grow there, marking a path to guide spirits to reincarnation. Yet another name for the lilies are ‘hell flowers’.

The pervasive symbolism of the red spider lily in Japan is regularly used in the arts from literature to music, film and animation. Even casual anime viewers will likely have encountered the red spider lily in various shows. The flower regularly appears, sometimes as a passing image, other times, as a more ingrained symbol in a show. It’s never there by chance.

In Japan, some flowers are so symbolic and meaningful there’s a word used to denote this unspoken language: hanakotoba. Wisteria, plum and chrysanthemum are just a few flowers that symbolize different things in Japanese culture. A bouquet is rarely simple and often full of unsaid meaning just as much as the seemingly casual appearance of a flower in anime is. The spider lily is part of this rich flower language and often is used to foreshadow a coming death.

Red spider lilies can be seen in passing in one of my favorite shows, Kimetsu no Yaiba (鬼滅の刃) or Demon Slayer in English, in the ending credits. In a show full of death, it’s not just foreshadowing, but a promise. Interestingly, there is also a fictional blue spider lily that plays into the storyline of the demon, Muzan.

The lilies play a lager role in the manga and anime, Tokyo Ghoul (東京喰種), by Sui Ishida. Another story where death is inevitable and frequent, the flowers make regular appearances throughout. But in this story, the lilies don’t symbolize only death. In one particular scene, the main character, Ken Kaneki, is dramatically tortured and as both his mind and body begin to break, a field of white carnations transforms into red spider lilies, symbolizing his metamorphosis into an entirely different person as he is destroyed.

Perhaps the most heartbreaking uses of the red spider lily I’ve seen in any anime, is in episode 9 of the show, Dororo (どろろ) by Osamu Tezuka (the same artist who created Astro Boy). The story follows the mysterious Hyakkimaru and child orphan Dororo. Episode 9 is heavy with red spider lily symbolism as it finds Dororo ill and encountering the flowers, leading to a flashback. Tenzuka must have been aware that another name for the flower was ‘abandoned child flower’ and handily defined that name in this tragic story where Dororo recounts how she became an orphan. The final scene, where her mother finally falls from starvation, unable to continue on, is in a vast field of red spider lilies. Surrounded by the flowers, she dies and Dororo is abandoned. 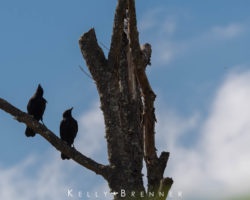 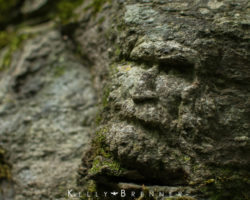 Poem of the Week: Upon The Hearth The Fire Is Red

By J. R. R. Tolkien Upon the hearth the fire is red,Beneath the roof there is a bed;But not yet weary are our feet,Still round the corner we may meetA sudden tree or standing stoneThat none have seen but we alone.Tree