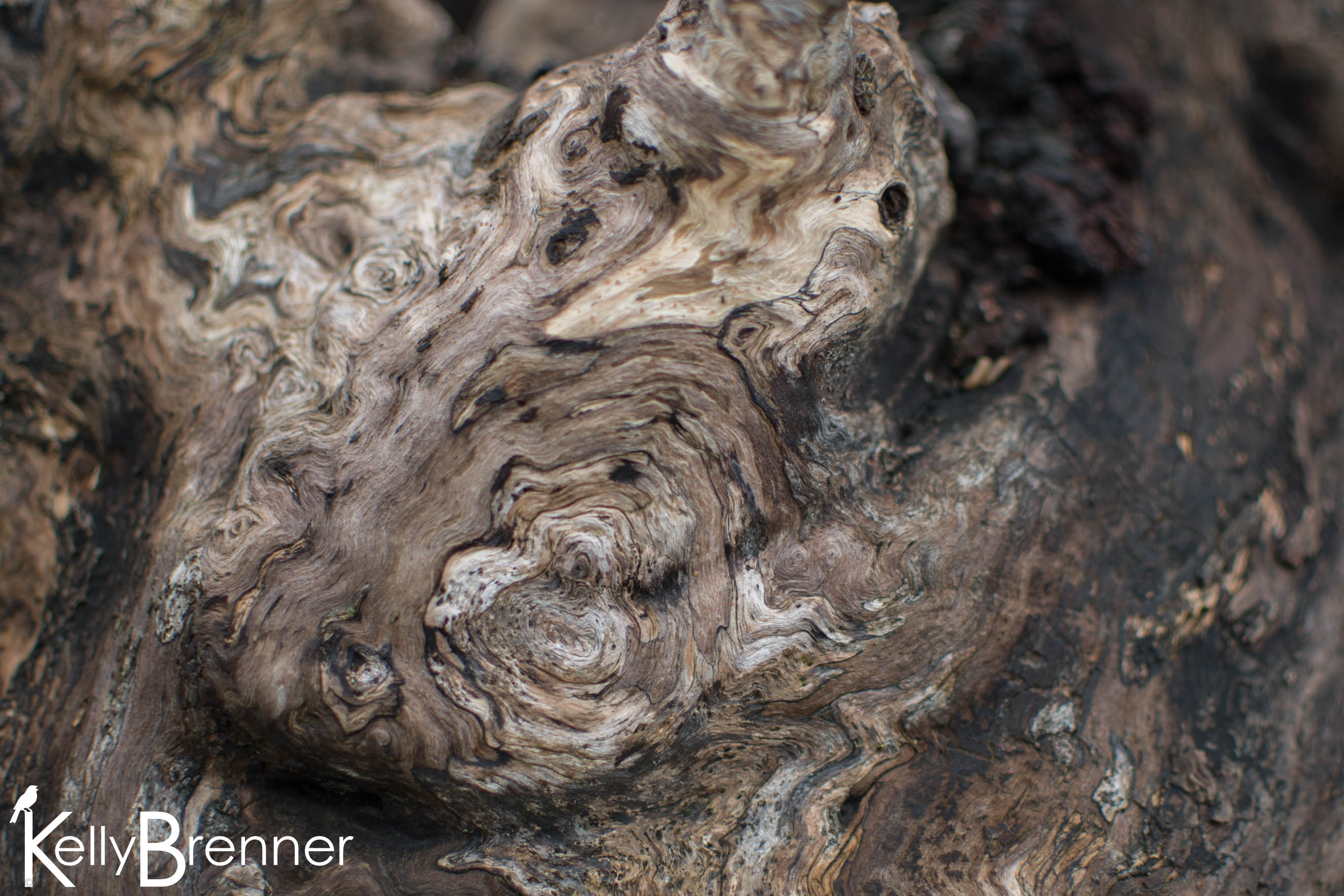 Earlier this week we visited Lincoln Park in West Seattle. The park lies along the western edge of the city overlooking Vashon Island and the Puget Sound. Part of the park is a bluff full of Pacific Madrone trees with paths down to the beach. We opted to head straight down to the beach where my daughter could wander along the rocky shore. I surveyed the water and we spotted Surf Scoters, a couple species of grebes, Harlequin Ducks, loons, Buffleheads, goldeneyes and gulls. We heard a Bald Eagle chattering but didn’t see it.

The high tide line was full of washed up logs, some cut by humans, others broken and worn down by the water. The swirling brown colors on the wood created beautiful patterns and illustrated how many shades of brown there really are. Some logs had seedlings sprouting from the cracks and fissures while others wore orange slime molds. Many held rocks and bits of colorful seaweed in their crevices. In the rocks below the logs were various bits of broken shells and other detritus brought in on the high winter tides.

Further down by the water my daughter found numerous large clam shells and threw them back into the water in case any barnacles were growing on them. As she threw rocks and shells into the water and poked at an incoming log with a stick, I searched the shore for other treasures. I discovered a shell with the telltale hole of a Moon Snail, but was even more excited to find a clam shell which appeared to have escaped a Moon Snail. The shell had a hole that looked like it had been drilled, but it hadn’t broken through. The shallow depression had a pointed peak in the middle which I found particularly interesting as I suspect it gives insight to the radula of the Moon Snail and its method of drilling. I wish I knew how that clam got away.

As I continued my nose-t0-the-ground searching, I was slightly startled as I looked up almost directly into the eyes of a crow. The bird was calmly sitting on one of the logs watching me get closer and closer until I was only a couple of feet away. We had a moment before a second crow flew in joining the party. I watched them watch me for a while before sliding away. As I stepped around a log I noticed some bright yellowish-green bits on the top of a log. It looked like the remains of a crab or other crustacean and I suspect I had interrupted the crow’s meal. I moved away and the crow flew to the log to finish.

As we reached the further point out in the sound, I spotted a pair of mammals surfacing in the water. I quickly dismissed seals or sea lions as an option and decided they were something more unusual. They weren’t large enough to be Orca whales and after tracking them for a while I caught a couple of distant photos of their surfacing fins. They would surface three or four times then disappear for several minutes. After a few sightings they disappeared for good. Studying my books and photo I think they may have been Harbor Porpoises.

The final excitement of the day was watching a loon eating a catch not too far out in the water. It wasn’t until I returned home that I got a better look at what it was eating. I believe it was some type of skate, and a young one at that. Skates grow to large sizes and since a loon was eating this one, although with some trouble, I suspect it was fairly young.