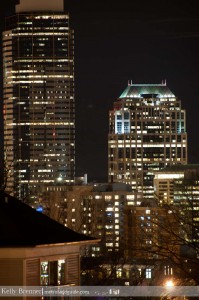 Artificial lighting affects not only our ability to see the stars, but it affects a great many aspects of the ecology of wildlife. Light can impact wildlife directly by streetlights or lit buildings, or more indirectly with sky glow, the light from combined city lights. It can affect many difference facets in the lives of wildlife including feeding, migrating, mating and even sleeping and in the worst instances it results in death.

One of the more well known and better documented examples is the impact of lights along beaches on newly hatched turtles. Once hatched from their eggs the young turtles naturally move towards the brightest lights which on a natural beach would be the stars and in the direction of the ocean. Instead, many turtles move inland because of bright lights, which subjects them to predators, cars, dehydration and ultimately death. Beaches with too much light can even prevent females from coming up onto the beaches to lay the eggs in the first place.

Cities have countless number of lights; along streets, in parks or in high-rise buildings. The impact of light on birds was discussed in the post ‘Bird Safe Building Guidelines‘ and the update to the original post. The effects of artificial light on birds in the city are still relatively unknown but there has been a recent interest in documenting bird kills. Many are killed when striking reflective windows, but lights play into a large number of collisions as well. In addition to colliding with brightly lit buildings, radio and television towers kill thousands of birds each year as well, many of them migrating birds. Other bright obstacles that prove fatal include lighthouses, emissions stacks, boats and even greenhouses. Lights can also confuse migrating birds navigation and turn them off course or trap them. When birds fly into a patch of light they can get trapped because they are unwilling to leave the light and fly back into the darkness.

One of the other presumed impacts of artificial light is the effect on species’ diurnal cycles. Some evidence has been found that birds will alter the times they normally sing. American Robins have been observed to start singing an hour earlier and male Mockingbirds will sing during the night after successfully mating in artificially lit areas. European Robins have been observed singing when a street light is in their territory. What impact this has on birds and their mating or how it affects their feeding, we don’t yet understand. Sleep may also be affected by artificial light in various species which could influence their physical condition. One further consideration is that many species have biological clocks they monitor to know when to migrate, breed or hibernate and artificial lights may affect those internal clocks and cause animals to hibernate too late or too soon or if they migrate too late they may get caught in adverse conditions. Birds who brood too early may not have optimal conditions for raising their young and also find a shortage of food; in fact some scientists have observed birds nesting in the fall instead of the spring.

A further consequence of lighting is that many species will continue to hunt during night hours when they would otherwise not do so. This may seem beneficial to the predators, but may have an adverse affect for the prey and create disproportionate populations.

Changes in light dramatically affect nocturnal frogs because their eyes can take many minutes, or even hours, to adjust to changes in light and this could severely impact their ability to catch prey. There is also evidence that lights affect the mating calling of frogs and that they may not forage as much because of higher risks of predation. Salamanders are similarly impacted and some were found to delay their active period by an hour when light was present which could greatly affect their foraging time.

Many species of bats are attracted by the insects who are attracted to streetlights. At first this may seem like a benefit, but there is a worry that species which use this method of hunting could either impact the insect populations or displace other species of bats. The slower flying bats who occasionally make use of streetlights may also be at a higher risk of predation by owls because of their flight habit and higher visibility. The insects themselves that are attracted to the lights are also greatly affected, such as moths who get drawn in and as a result their navigation is stopped which prevents them from mating, dispersing or migrating. Of course it also exposes them to easy predation

Unfortunately, artificial light is an area that has yet to be explored in any real depth. We can only recognize that it is a problem and hope that scientists begin to study it because until then we can’t develop the best ways to address the issues. Many cities have partnered with their local Audubon societies to start lights-out programs which appear to be helping and the Audubon Society of Portland has started to study and document bird kills. It’s an excellent start and hopefully the more this topic is talked about the more we’ll understand the full impact of artificial lighting.

Lights Out Chicago:: City of Chicago 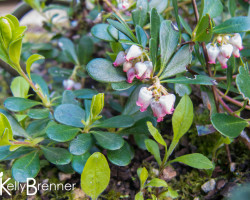 Besides having one of the best plant names around, Kinnikinnick (Arctostaphylos uva-ursi) offers a variety of wildlife benefits. According to the Seattle Audubon Native Plant list (PDF) Kinnikinnick provides nectar for butterflies and it's a larval food plant as well.

What started as an artists sketch four decades ago has now become a working product. In 1970 artist Robert Smithson, perhaps best known for his 'Spiral Jetty' earthwork, created a