via:: A Guide to Rooftop Gardening

One of the most impressive green roofs in the country is the one on top of City Hall in Chicago. Part of the impressiveness comes from the fact that the building is over 100 years old and was not designed specifically to allow for the additional weight of a green roof. Many buildings can only sustain a minimal depth of green roof substrate but somehow the building in Chicago managed a full garden. The building is large, covering one city block so there was a lot of roof area, over 20,000 square feet in fact, to work with. There are over 20,000 plants installed and 150 plants species.  Most of the plants are native and what would be found in in local prairies. Among some of the species included are asters, milkweed, coneflower, sedges, sunflower, clover, grasses and even vines, shrubs and two trees. You can view a full plant lists at the City of Chicago website.

The roof was installed in 2000 and was initially designed as a demonstration and test garden with the goal of studying the affect on the urban heat island. Cooling is done in many ways, the first of which is the reflective property of the plants. In addition the plants help cool the air by evapotranspiration, which happens when the plants release moisture from their leaves. In addition to cooling, the plants serve to filter pollutants from the air and greatly reduce the strain on the stormwater system by holding the water on the roof. During a rainfall of 1″ the roof can store 75% of that water.

In addition to all of these benefits, the roof has been successful as habitat despite not being a design focus. There are beehives on the roof, but other bees have been observed in great numbers leading to a belief they were nesting in the porous soils. There have also been many bird species observed such as the regular sparrows and juncos, but also a much longer list including wrens, thrushes, warbler, thrasher, chickadee and flycatcher. 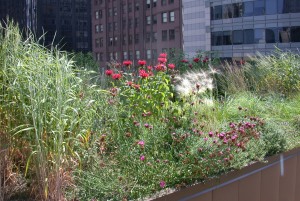 Unfortunately wildlife monitoring is still not addressed with many green roofs in the United States unlike stormwater monitoring which is fairly common now. It’s going to be hard to design green roofs for habitat if we’re not taking advantage of what’s already been done especially when they’ve been successful to some extent. I think this is an issue I’m going to need to look into more deeply.

In 2002 the roof design won a merit award from the American Society of Landscape Architects.

Birds on a Cool Green Roof

Read more about the roof at Greenroofs.com project page.

The next post is about rain gardens and ponds and is where habitat, hydrology and stormwater management start to overlap. This is a paper I wrote about the hydrologic cycle that may be helpful to anyone wanting to understand hydrology

Why? Ecosystem Services:: The Pollinators

The first question many people will ask when you tell them you want to create habitat is why, which often comes before the how. It's important to formulate an educated response to the why