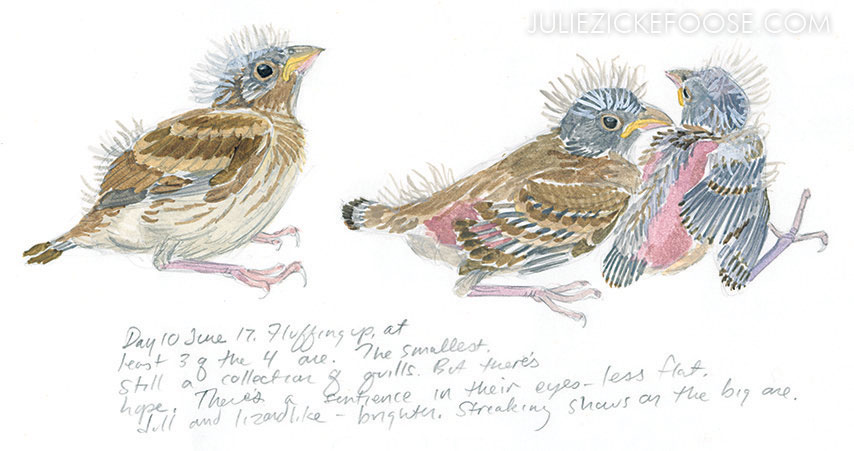 Book Review:: Baby Birds – An Artist Looks into the Nest 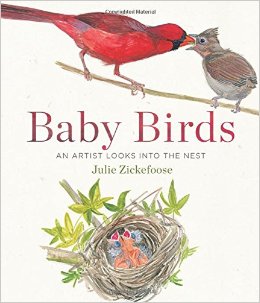 I sat at our picnic table and watched the Bewick’s Wrens going in and out of our nest box carrying sticks, grass, feather – materials for building a nest. The box was red and solid, hiding the mysteries of what was transpiring inside those walls. As the wrens stopped bringing materials and acted more mysterious, silently slipping out of the box and dropping to the ground, curiosity consumed my mind. What was going on in there? Were there eggs? Was the female inside sitting on eggs, laying them? What were they doing inside? How many eggs were there? The best I could do was watch the hole and listen for any sounds.

It was while sitting and watching that box I first looked at Julie Zickefoose’s new book, Baby Birds, An Artist Looks into the Nest. Over the course of 13 years Zickefoose studied 17 different species’ baby birds and documented their development in an utterly unique perspective. It’s not often a book is truly groundbreaking, but this is the first time anyone has documented in such detail the growth of these chicks. As a trained bird rehabilitator and artist, Zickerfoose had the special qualifications to take on such a task. Daily, she carefully removed a chick from its nest to draw study sketches of them. She faithfully did this every single day until the chicks fledged and she even continued to sketch the fledglings.

Each of the species is documented in its own chapter full of drawings starting with the Carolina Wren and ending with a Yellow-billed Cuckoo. Each chapter contains the detailed daily journal entry describing sizes, colors and behaviors of the chicks along with Zickefoose’s personal insight and experiences.

Some of the nests were successes, some ended in tragedy, but Zickefoose faithfully documented the chicks growth and kept meticulous notes on their development. The art is beautiful and it’s a pleasure to get such fascinating insight, and the ability to see something completely new. At the beginning of each chapter, the drawings are compiled on one beautiful spread  – sometimes a fold out, and a sketch from each day accompanies the daily journal entry for that bird.

Among the birds featured include some of those commonly encountered like House Sparrows, Starlings and House Finch which she looked at with her daughter’s encouragement and as a result, Zickefoose found that “all birds are deserving of study.”

The only downside of course, is there are only 17 species and aside from a couple exceptions, most are not found here in the Pacific Northwest. Still, it’s an enjoyable and enlightening book to see a previously unknown aspect of bird life. I’m greatly appreciative of Zickefoose’s tremendous work in bringing this side of bird life to light.