Via Animal Architecture blog, the result of the Beyond the Hive Competition (that was featured here last month) was announced this week and the winner was the Beevarian Antsel and Gretel Chalet. There are images of all of the constructed designs along with images of the structures with their designers at the British Land website. Here are images of the designs and the final constructed projects via the British Land website.

Beyond the Hive Competition:: British Land

Beyond the Hive Competition:: The Metropolitan Field Guide

Kelly Brenner is a naturalist, writer and photographer based in Seattle. She is the author of NATURE OBSCURA: A City’s Hidden Natural World, coming April 1, 2020 from Mountaineers Books. She writes freelance articles about natural history and has bylines in Crosscut, Popular Science, National Wildlife Magazine and others. On the side she writes fiction.

Some butterflies get their color through complex shapes in their wings called gyroids.

How can butterflies help develop faster electronic and optical devices? Through their gyroids of course. Scientists are studying gyroids in butterfly wings in an attempt to better understand this complex shape. A gyroid is a shape that gives some butterflies their color, what is called structural color. The light interacts with these complex shapes, which the scientist describes as similar to swiss cheese, with air traveling in three different dimensions. What's that mean for electronics? Electronics function by controlling the flow of electricity by controlling 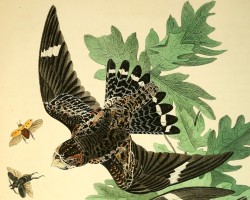 The Common Nighthawk (Chordeiles minor) is a small, highly camouflaged bird that is most active at dusk. They are not hawks, but are instead in the nightjar family. They breed throughout North and Central America and spend the rest of their time in South America. The Nighthawk is often also called a bull-bat while the Spanish name for it is añapero yanqui and it's called bacuaru-americano in Portuguese. In recent years they have started vanishing from the cities and there has been a general decline in nighthawk populations throughout North America. The foremost explanation for this is a change in