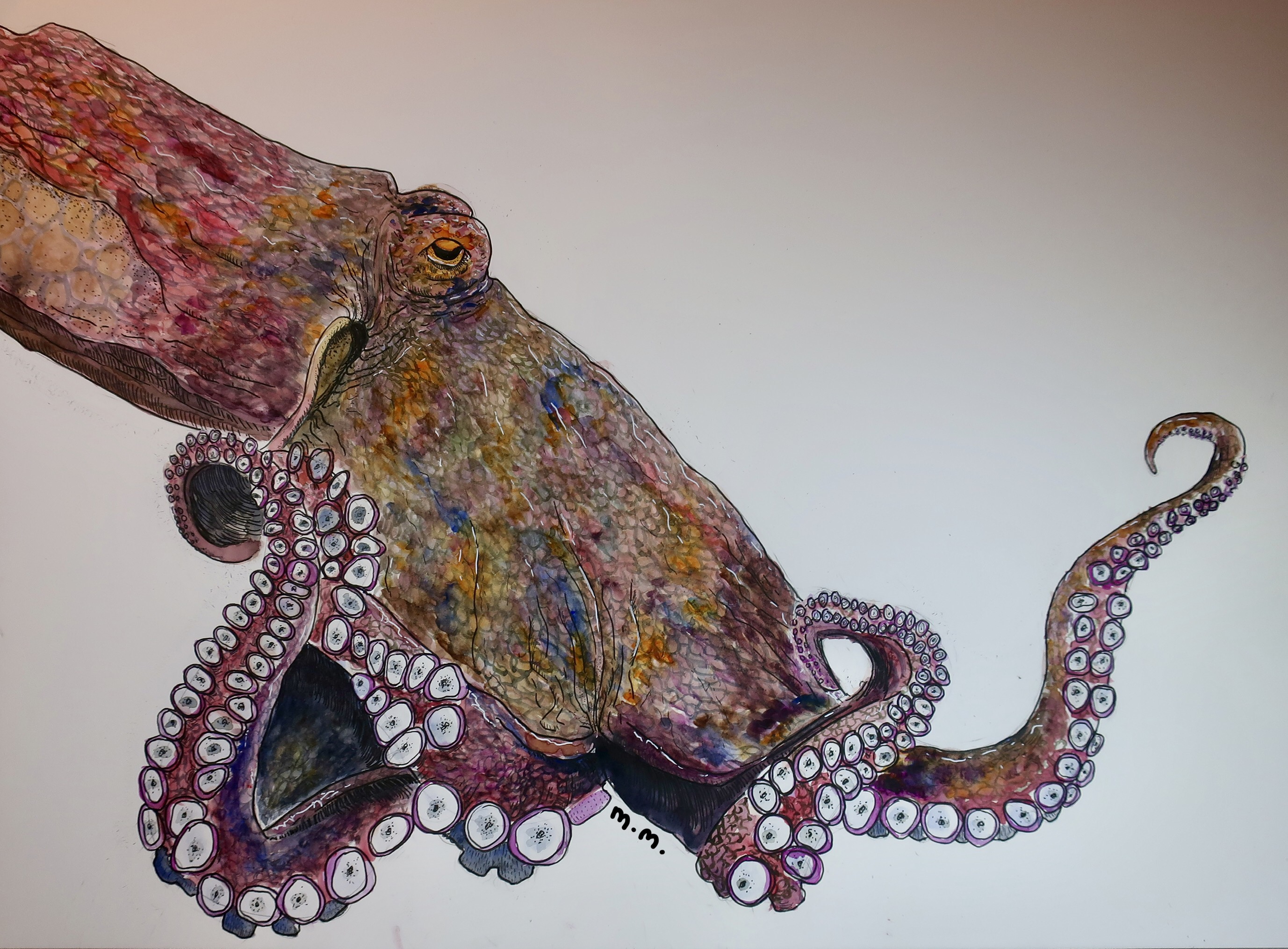 By Kelly BrennerJune 19, 2019No Comments

Welcome to the very first edition of a new feature highlighting artists who focus on the natural world. This edition I am pleased to introduce you to Elizabeth Mills. I met Elizabeth on Twitter and was lucky enough to win a small painting of a seahorse by her. My thanks to Elizabeth for being willing to be the first artist featured.

When Elizabeth Mills was in her final undergraduate year at university, she became stressed and realized she needed to find a guilt-free way to relax. But because she had a hard time switching off, she had to trick her brain into relaxing and came up with a creative solution. She combined making art, which was something she had always loved to do, but had neglected while she was in university, with her current focus on marine biology. Elizabeth began painting marine creatures and in 2016, Marine Mumbles was born.

If you’re not from Swansea in Wales, you’re forgiven for not knowing what ‘Mumbles’ is. Located in Swansea Bay, Mumbles is a highly visible headland and one of Elizabeth’s favorite places in the world to go rockpooling. While she was at school in Swansea, when she saw the rock formation, it both inspired and reminded her to keep going with her website and making art.

Exploring rockpools has been a life-long love for Elizabeth, who grew up on an island in the U.K. where she would spend time fishing and searching for crabs. Today she has taken her love of the marine world to Scotland and is halfway through her PhD as an interdisciplinary researcher. She works with engineers at the University of Dundee on concrete that goes into water, and something called biofouling, which is basically when small marine organisms land and start to grow on a surface. Elizabeth is looking into how we can change the concrete that we place in the sea to benefit marine invertebrates.

Elizabeth has always lived near the coast and now in Dundee, she explores the rockpools of Scotland, often with her camera in hand to record video. Walking around the shoreline, looking for crabs and watching barnacles is her favorite thing in the world to do and for a time, she can escape from the world while she’s poking around in seaweed and rejuvenate herself. Sometimes she takes her sketchbook to the shore to create watercolors in the field. Drawing and marine taxonomy goes hand-in-hand as Elizabeth points out, because they both focus on close observation of the organism.

Illustrating plants and animals highlights details we often overlook, and draws our attention to subtle differences we may miss. Elizabeth has discovered when painting fish, for example, just how much species differ both in form and texture or exactly how spotted a whale shark really is.

Besides her art, one of the things that drew me to Elizabeth on Twitter, was her love of barnacles, one of my favorite marine organisms. I asked her what it was about barnacles she liked so much. She gave me a shortened barnacle love rant and said “they are so underrated, but you wouldn’t have a rocky shore we know without them,” even if it’s just because visitors often slice their hands on them. I can attest to this fact as I regularly leave the beach with scraped and sometimes even bloody fingers and hands.

They settle on everything, are found globally, they are world record holders when it comes to reproduction, and they have such a complex planktonic life stages with amazing metamorphosis. From a biofouling perspective, they can even detect material properties and choose where they best want to settle! They even leave a special glue behind as they search, so you can follow a barnacle’s footprint!

Elizabeth’s other favorite marine organism echoes her childhood catching crabs on the shoreline. It’s the Devil Crab (Necora puber), a species that she calls an “anger machine” that will go after much larger humans. But, she says, they’re gorgeous, with eyes that are bright red and blue legs. Crabs are her favorite organism to illustrate because she loves their “structure and the claws, you can also chuck a lot of personality into a crab when painting it because they are such little personalities themselves!”

As Elizabeth worked on her master’s thesis and all her energy went into it, her writing on the website became more intermittent and once again, she came up with a creative solution to keep going – videos. Although she enjoys public speaking, she found that when she put herself in front of a camera, she froze up. But little by little, starting with doing a thesis presentation and then a BBC presenter audition in front of the camera, she became more comfortable with it.

Today, she has over 50 videos on her Marine Mumbles YouTube Channel. Some are time lapse videos featuring her creating art, like drawing a page full of nudibranchs or painting a kelp forest. Others are explorations of rockpools such as at St. Andrews or when she recently took out a new underwater camera to try out.

I really enjoy Elizabeth’s videos because they are so much fun. Often decked out in a novelty cap, a tradition she started in Puerto Rico when the only souvenir she could bring back was something she had to wear, she is entertaining and educational with a large dash of silly.

As Elizabeth finishes her PhD, art continues to be a focus and she’s always looking to how she can expand on it. She has created some art on a digital medium, but hopes to dedicate more time to improving her skills. Other things she’d like to try are oil painting and even dabbling in animation.

Just as her PhD brings together the different disciplines of marine biology and engineering, Elizabeth has also learned to successfully blend together science and art in a thoughtful and entertaining way.