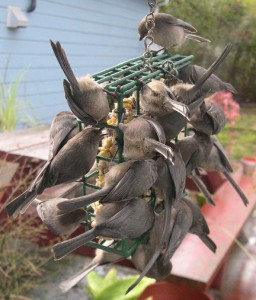 When it comes to backyard bird feeding, the bird feeder reigns supreme. Many people have one or more feeders in their yards and some people go to extremes with their feeders. However, how many people have stopped to consider if they are benefiting or harming the birds. This is an issue as contentious as keeping cats indoors and there are many viewpoints. Here is a first hand account of just how contentious the issue can be. The truth of the matter is however, we know very little about the impacts of artificial feeding.

A new study in the UK on artificial feeding with Great and Blue Tits (similar to Chickadees in the US), has shown some surprising results. They found that in groups where supplemental feeding was provided, the birds laid eggs earlier and had shorter incubation periods, not entirely surprising. The result  that was surprising was that the birds which were provided with supplemental food actually produced significantly smaller clutches and there was a lower hatching success rate among one species.

But given that millions of people feed their birds in their gardens, we still know remarkably little about the effects.

Indeed, in another study looking at Blackcaps in the UK found that artificial feeding has led to the beginning stages of evolution. By providing food in a region that would not otherwise offer winter food for the species, the Blackcaps may eventually split into another species, one that migrates shorter distances.

This tells us that by feeding birds in winter we… produce an evolutionary split. And we have produced these initial steps in as little as 50 years.

The scientists in this study believe that the changes may be a good thing because the birds can overwinter closer to their breeding grounds. They also believe that it illustrates that not all human impact is negative. However, they also state that because the evolutionary process could take thousands of years, this first step is reversible. For example, if there was an economic crisis and people stopped providing food the whole system could collapse.

There are many other risks to bird feeders that many people already know such as disease and predation. Seeds provided as food may also be dispersed and create a problem with non-native or invasive plant species. Dependency could be a problem if the homeowner moves, goes on vacation or stops providing food. Feeders placed too close to windows increases the risk of bird death by window strikes. Additionally there is concern that is affects migration, making species leave later than they normally would and putting them at risk of migrating during bad weather. Because of this many local parks have implemented no feeding of waterfowl policies. However, as anyone who has visited a park can see, these policies are mostly ignored and rarely enforced.

On the other hand there are many benefits to providing food to birds. Human enjoyment is a big one, we like to see wildlife, we feel more connected to it when we feed it and see it in our own backyards. It also makes us more aware of the natural world when we’re more and more cut off from it and better educated about the wildlife we see. Many people start to identify, learn songs and behavior of common visitors. In addition it may help to offset the loss of habitat and as a result, a natural food source.

Despite what side you come down on, that view has very little scientific backing. We still know very little about the impacts of our supplemental bird feeding and it’s hard to argue or make an educated guess without that knowledge. When someone says with certainty that bird feeding does not impact migration they are talking from belief, not from fact.

Either way, one thing we can be certain about is the benefit of landscaping for wildlife. Providing plants offers benefits to more than just birds as well.