The ARC International Wildlife Crossing Infrastructure Design Competition, which was mentioned on this blog back in February here, has finally posted the submissions of the five finalists. The winner won’t be announced until the end of January at the Transportation Research Board Annual Meeting, but the designs can be viewed on the website now. The five finalists include Balmori Associates from New York, The Olin Studio from Philadelphia, Janet Rosenberg & Associates from Toronto, Michael Van Valkenburgh & Associates with HNTB Engineering from New York and Zwarts & Jantsma Architects from Amsterdam.

Be sure to visit the ARC page with PDF’s of all of the entries, it is certainly worth taking a look at, there are some interesting ideas. 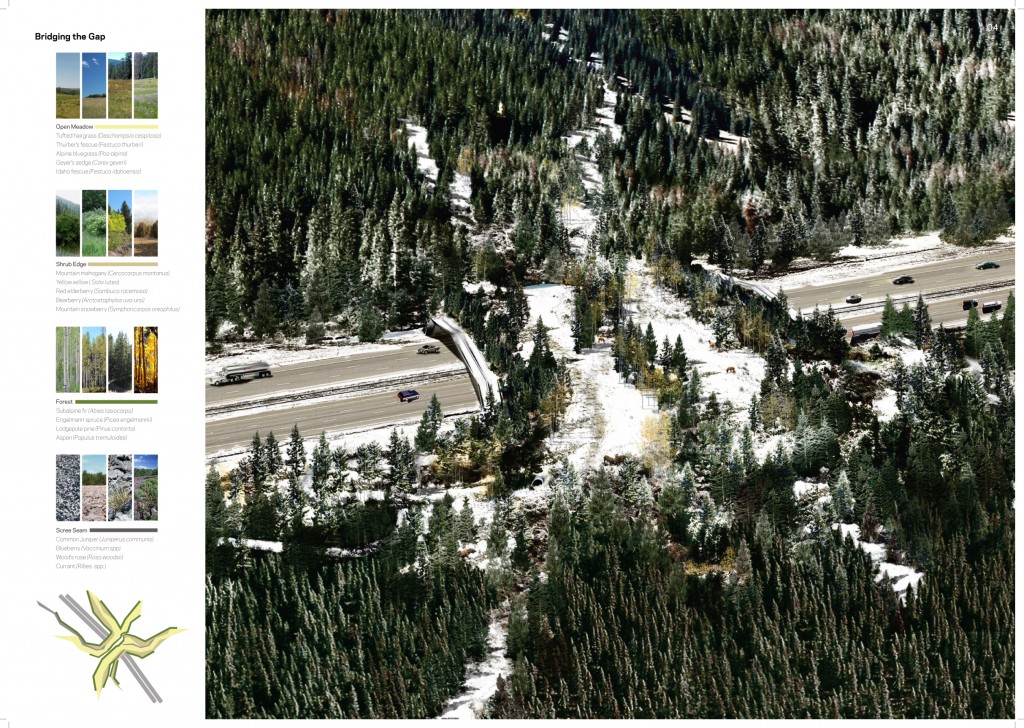 Hypar-Nature (PDF) is the entry by Michael Van Valkenburgh & Associates and HNTB Engineering. “Instead of attempting to recreate the surrounding nature, the design condenses and amplifiesmultiple landscape bands (Forest, Meadow, Shrub, Scree) into habitat corridors that provide connections for a larger cross-section of species.” The system is modular and cost effective. The plan includes a series of habitats both on the overpass and at the base including a forest, shrub edge, meadow and scree all repeated in bands across the width of the bridge as well as a wet meadow at the end as a wildlife attractor.

Landshape (PDF) is the entry by Zwarts & Jantsma Architects. The bridge design is a  curves them, the bridge having three defined curves, the first of the actual bridge, the second of the ground level that advances over the bridge and the third being the continuation of the natural vegetation over the bridge. The design is interesting and includes many habitat elements including a stone wall, woody debris, snags and integrates water, small hills and ha-ha’s with fencing. The planting design also contains multiple planting areas.

Janet Rosenberg & Associates entry(PDF) entry focuses more on the human interaction than most of the rest do which is apparent by the bright red sides. “We set our sights, minds and challenges on a threshold of an evolutionary step in the design of an animal road crossing, not simply a bridge, but a new species in form and function.” The design has multiple ramps leading up to the main bridge because they believe it provides greater funneling. I’m not sure about the ramps though because from the images the walls are rather tall with little cover and the ramps are narrow which may not be suitable for wildlife. The bright red structure certainly creates awareness of the project from the drivers perspective though. Unlike most of the rest, the planting plan isn’t categorized into habitats and the only trees are in the center of the bridge and in between the ramps.

Wild (X)ing (PDF) is the entry by The Olin Studio. The design is similar to existing green roof modules only larger in scale. The modules are each a different habitat and are adaptable to change and are also constructed in layers similar to green roof modules. The modules range in habitat type from fir and spruce forest, xeric shrubland, mesic shrubland, wet meadow and others and are arranged in zones running along the crossing. The bridge is a concave shape with the lowest point in the center of the crossing. Also planned is an overlook near the crossing for public education about the project which is an excellent idea because it increases awareness as well as providing a vantage point to see the crossing structure which would not otherwise be visible.

MCS Modular Crossing System (PDF) is the entry by Balmori Associates and is one of the most simplistic designs. It includes a number of perimeter trees, but the majority of the planting is a series of waving patterns of grasses. The underside of the structure is an interesting wood panel/beam design and is quite intriguing.

Now you can find many new pages of resources under the 'Resources' tab on the top of this page. Newly added pages include resources for Habitat Elements, Golf Course Habitat, Schoolyard and Campus Habitat, Backyard Habitat and Rain Gardens and