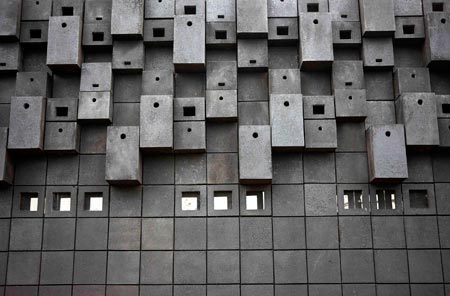 In Cardiff Bay, Wales there is a new housing installation aimed at birds and bats. Gitta Gschwendtner, a German-born, London-based artist worked with ecologists to create the new housing in Century Warf containing 1,000 different boxes. The wall sits along a public river pathway, backed by a residential development. There are some good articles about the wall but I wanted to know a bit more so I asked Gitta a few questions which she kindly answered.

Were there specific species you were designing for? Do the nest boxes reflect those species with specific hole dimensions, material types?

Have any been occupied since installation?

No, the Animal Wall has been installed in August last year and we will not expect any one in the boxes until this spring.

Are there any territorial issues between species or within the same species? Have any species become territorial towards humans?

The boxes only start from about 3 mabove floor level to be out of reach for humas. Certain species like the bats and starlings are concentrated at the top since they prefer it that way.

Sparrows like to nest in colonies and will take up boxes right next to each other. We expect the other species to keep a bit of a distance between next boxes. Overall there will be an expected uptake of about 10-20% of boxes at any one time. Unoccupied boxes will be cleaned by worms in the meantime.

I can’t tell from the photos I’ve seen but is there vegetation close to the houses? Do the birds have somewhere to perch before entering the houses?

No, there are no perches, birds and bats do not require perches to enter a nest box. the surface is quite rough, which is important for bats to climb into the box. There are bushes underneath the boxes which will provide cover for birds when picking for worms.

Has there been any problems with mess with animal waste or nest materials?

Not yet, but it is not anticipated. Animals keep the space around their nest clean in order to not attract predators.

If you’re not familiar with European bird species the family of tits as referenced above are very similar to our chickadees. And it may surprise many people to know that house sparrows and starlings are not disliked and even attracted in their native regions. Some of our ‘pest’ species are even in decline in the U.K..

It will be very interesting to check back in on this project to see if it is successful. Designing for wildlife is always very hard because the very best design with the very best expert advice may have no success for reasons beyond our understanding. This design however, has the benefit of being along a waterway. Rivers and other water often serves as travel corridors for many species including bats, birds and insects and a nesting colony will have more of a chance of success in a good location. This design in the middle of a city may not be successful because of a lack of patches and corridors that provide other habitat elements of the daily needs of different species.

Read more and listen to Gitta give a short interview on the BBC. 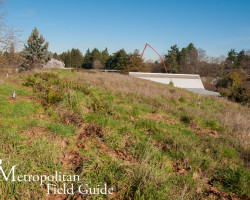 The Woodland Park Zoo and adjacent Green Lake is a bit of an oasis in that area of Seattle with no other green space close by. Being such an oasis they get a number of migratory birds stopping by along

Butterflies are a very popular species for gardeners and there are many resources on the subject. One of the best books on the subject is called Butterfly Gardening: Creating Summer Magic in