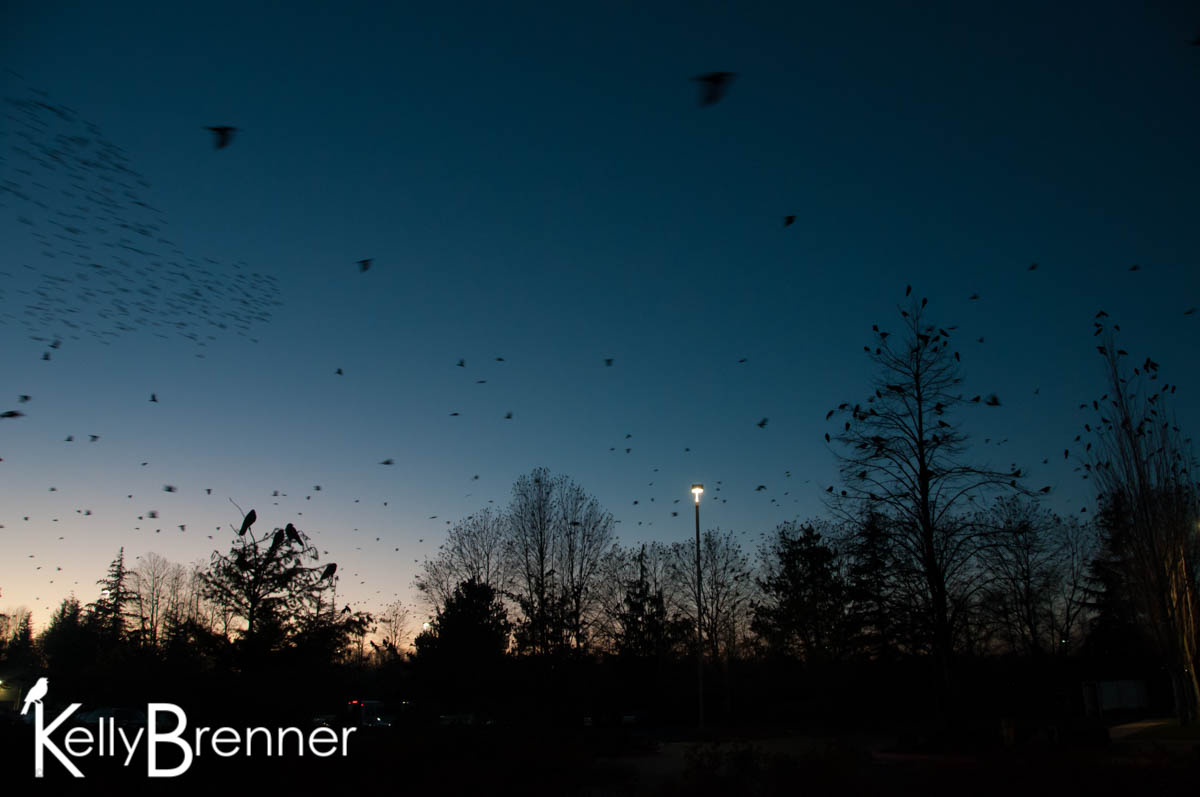 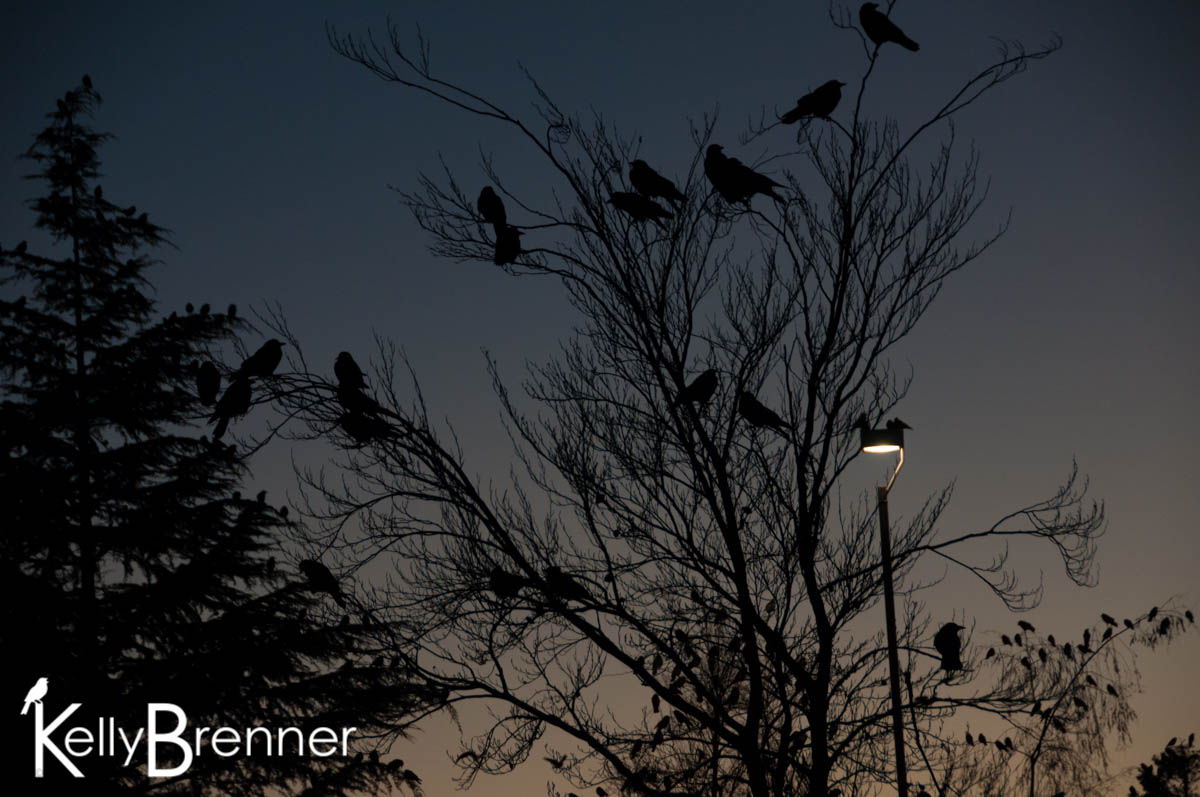 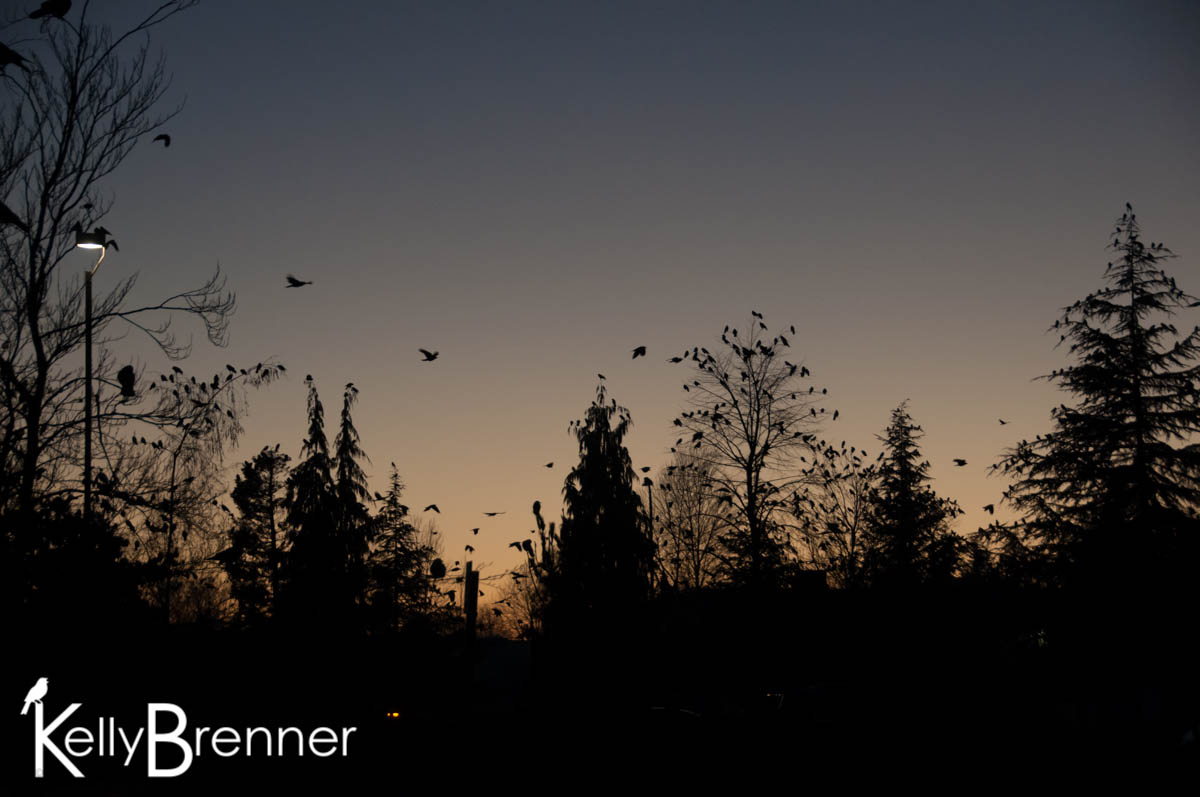 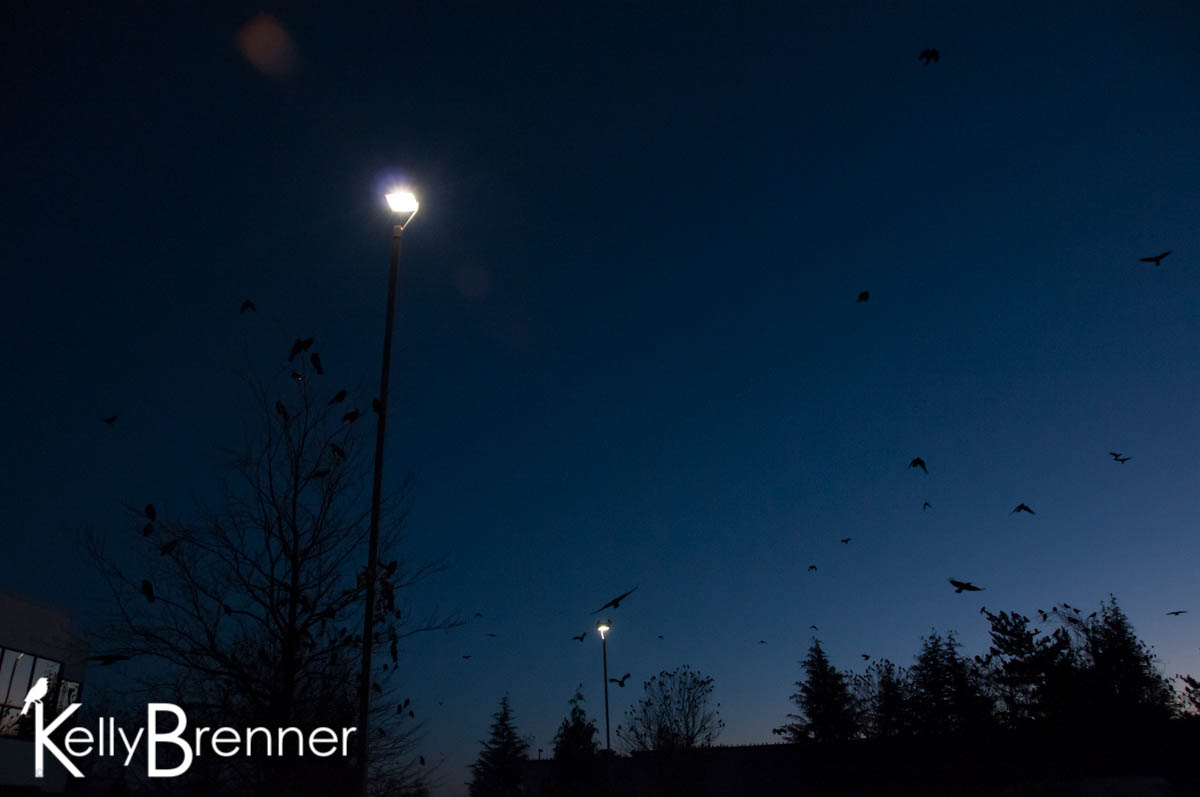 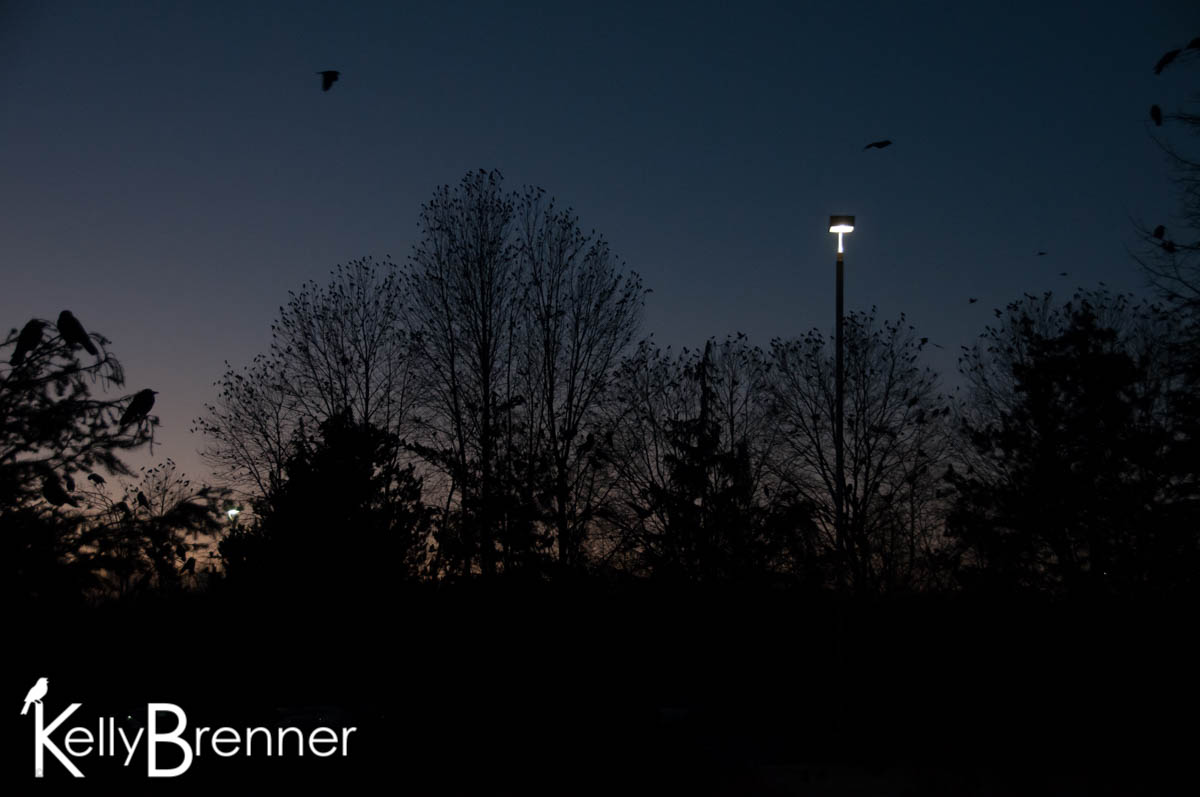 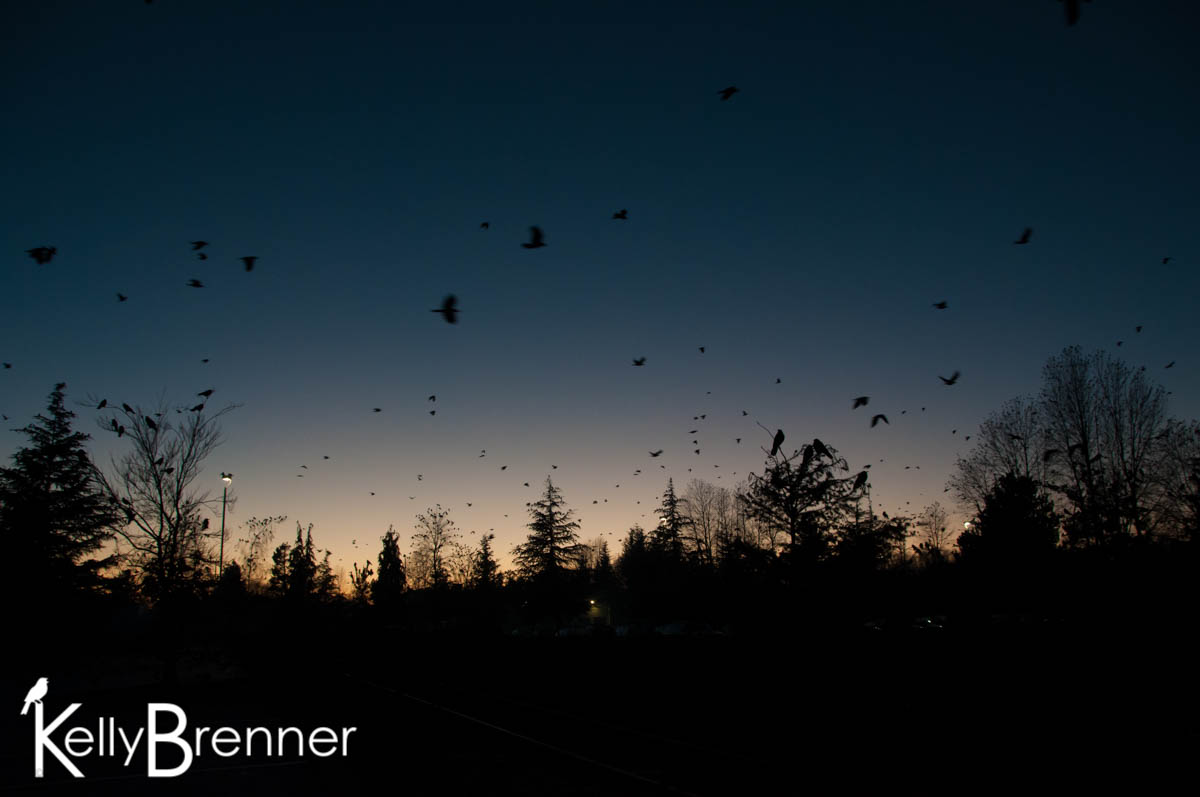 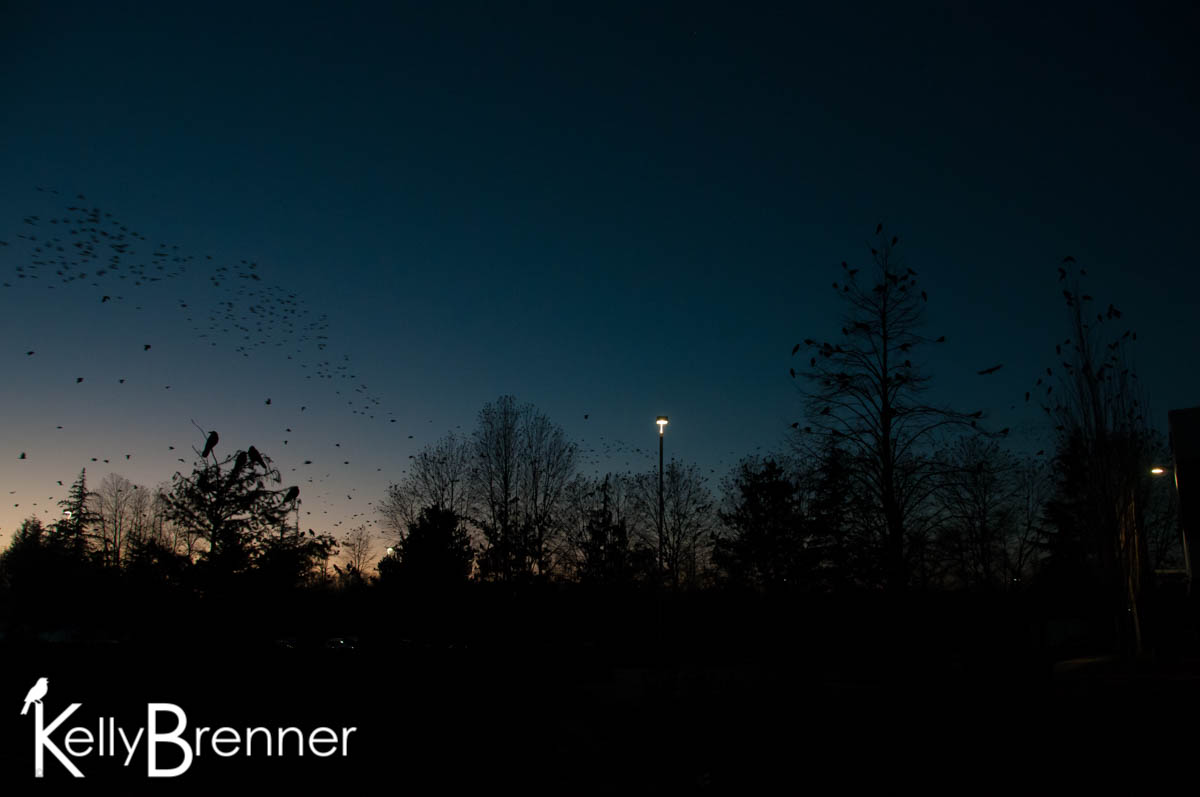 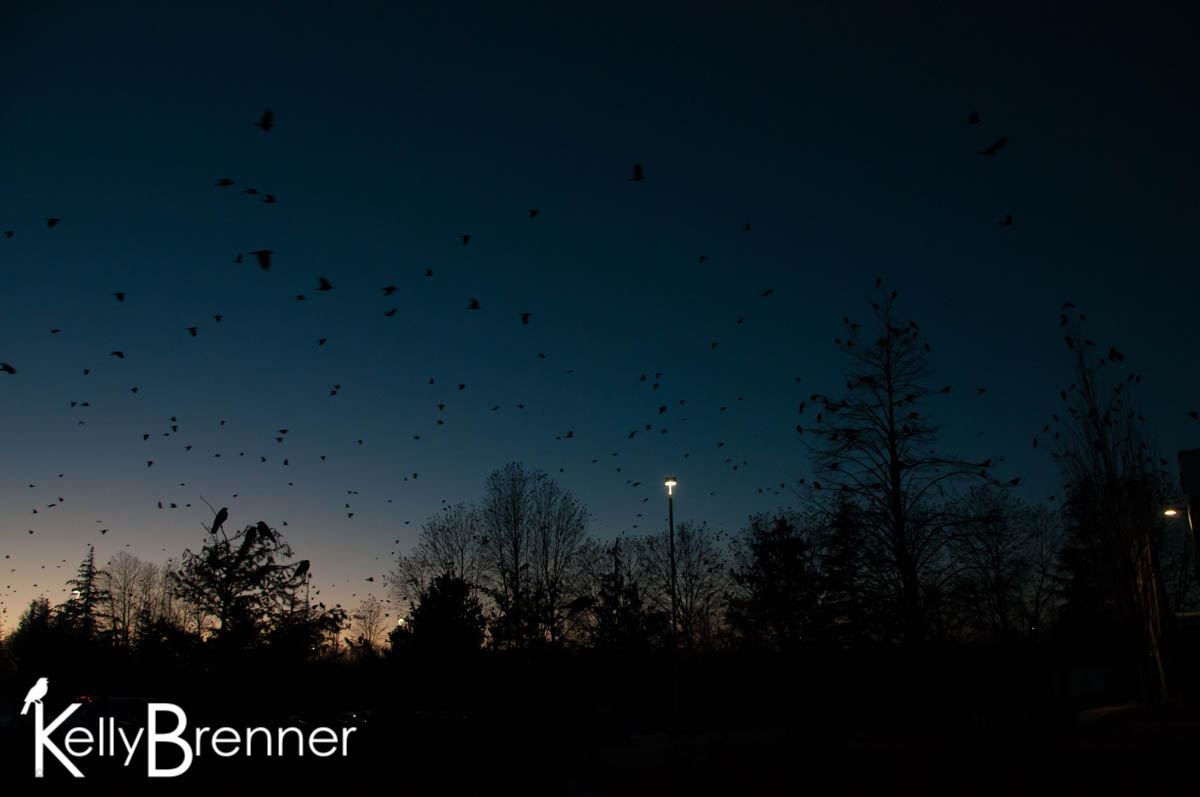 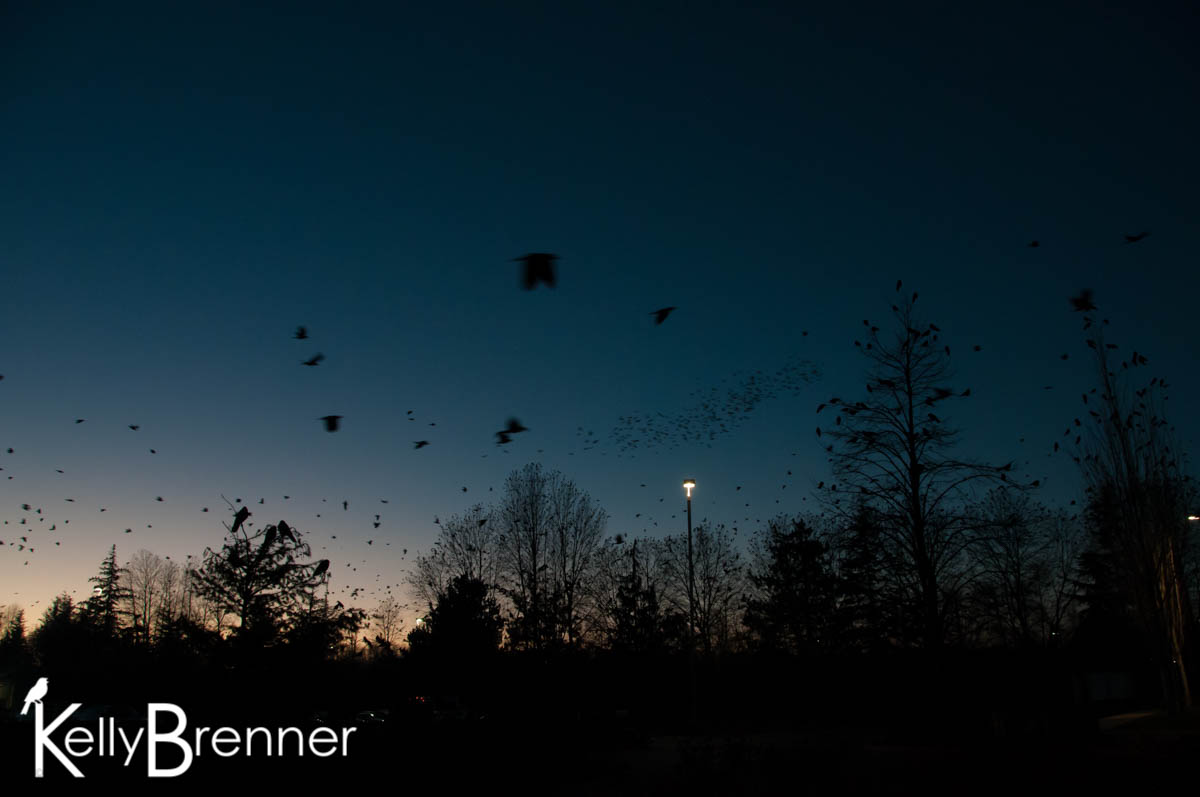 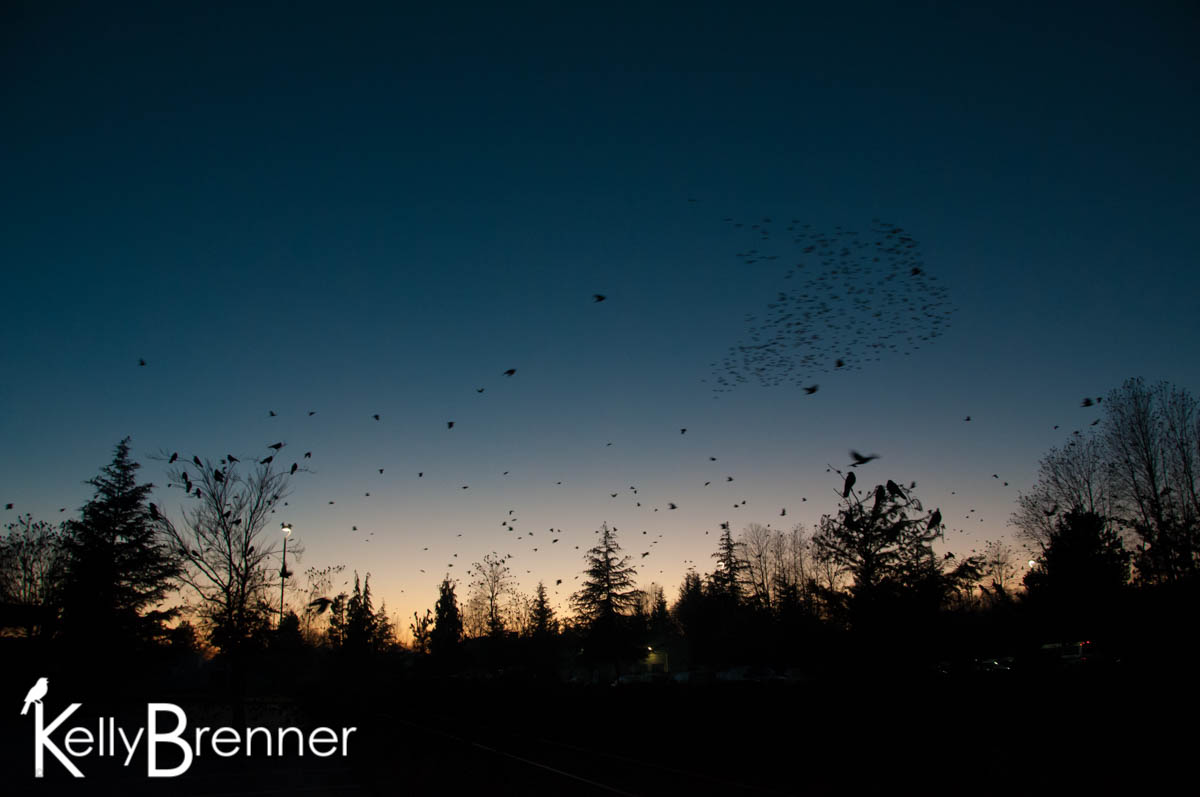 For a few weeks my husband has reported seeing Starling murmurations from his office in Kent, just to the south of Seattle. Also recently, there been several reports of murmurations of Starlings seen at Ikea in Renton, between Kent and Seattle. I desperately wanted to see this for myself so this afternoon we made the drive south to Kent and arrived just after 4pm to watch for Starlings. We waited and watched, watched and waited. At first all we saw was a few small groups, 3-5 in size – which showed up and landed in nearby trees.

As we watched for Starlings, something caught my eye in the field across the street, something that looked like a pair of dogs. My binoculars confirmed my suspicion, a pair of coyotes were walking through the field. Excited, I watched them slowly wander around the field, too far away for photos. After a short time they disappeared down a small hill towards the railroad tracks.  Not long after the coyotes vanished, I caught a glimpse of a small hawk which landed in the tree near us. I’m not sure what it was, it was too small for a Red-tailed Hawk and it wasn’t a Cooper’s or Sharp-shinned Hawk. I know the Kent Ponds and the Green River Natural Resources Area – located just to the west – get different raptors like Northern Harrier and Red-shouldered Hawks. I’ll study the photo to see if I can figure out what it might be.

As we continued to watch we saw a few larger groups of Starlings fly past, but they weren’t flying around in murmuration fashion, they were flying very purposefully north. We decided to take a gamble follow them north because we were quickly losing the daylight. As we drove, we saw a couple more groups of Starlings – all heading north. Knowing they’ve been seen at Ikea and also knowing that’s where the crows gather, we headed in that direction. The crows we watch fly past our house each night in the autumn and winter go this way. Most people know about the Bothell crow roost; but many of Seattle’s crows fly south, to Renton. The hundreds we watch over our house are heading this direction.

As we neared Ikea I saw a river of crows heading southwest towards the store. We drove around the block coming towards Ikea from the southwest and as we got closer all hell broke loose. It was like the earth had erupted in birds. Crows were flying in from all directions and huge groups of Starlings were merging into larger mega-flocks. We drove around the block – the crows tantalizingly close – we could see them in the trees behind office buildings, but all the gates were closed and we weren’t able to get close. That part of Renton is a series of large industrial parks with very long blocks and numerous buildings.  As we rounded the block we found a large open parking lot – we later realized it was the overflow Ikea parking.

We drove through the parking lot, excitement building with each parking aisle we passed by. The numbers of crows grew and grew until we came to the center of the chaos. Here hundreds of crows covered every surface – every tree, every building, even the parking lot was covered in crows. I’ve been to the Bothell roost a couple of times and 10,000 crows is impressive, but this spectacle impressed me even more. Crows were everywhere I looked. I glimpsed a few murmurations flying around the perimeter of the crow gathering. Before the car had even stopped – my husband at the wheel – I jumped out of the car as my phone recorded video (see below). As I walked forward, completely immersed in the murder of crows, I looked up and found myself directly under a huge murmuration – hundreds upon hundreds – of Starlings. It was incredible.

The murmuration flew over me and I was lucky to record the spectacle of a large murmuration intermixing with the murder of crows. As fantastic as the Bothell crow roost is, it’s nothing compared to the combined wonder of Starlings and Crows. This is a phenomena I could visit every night. As I watched and recorded, the security guard briefly stopped his truck to tell me this happens every night. He drove off before I could ask any questions.

Words can’t describe the thrill of being in the midst of this wonderful spectacle. And the magical experience is thanks to two of our most common and overlooked bird species. 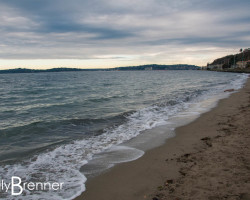 In 2016 I'm doing a 365 Nature project. Each day of the year I will post something here about nature. It may be any format, a photo, video, audio, sketch or entry from my nature journal. It could be a written 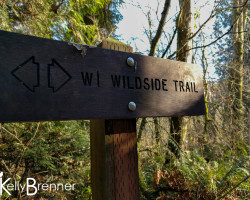 For awhile I've entertained the idea of a 365 project - that is, doing something every day, for a whole year. I was partly encouraged by the 30 Days Wild project we did in June 2015. I've also watched many people