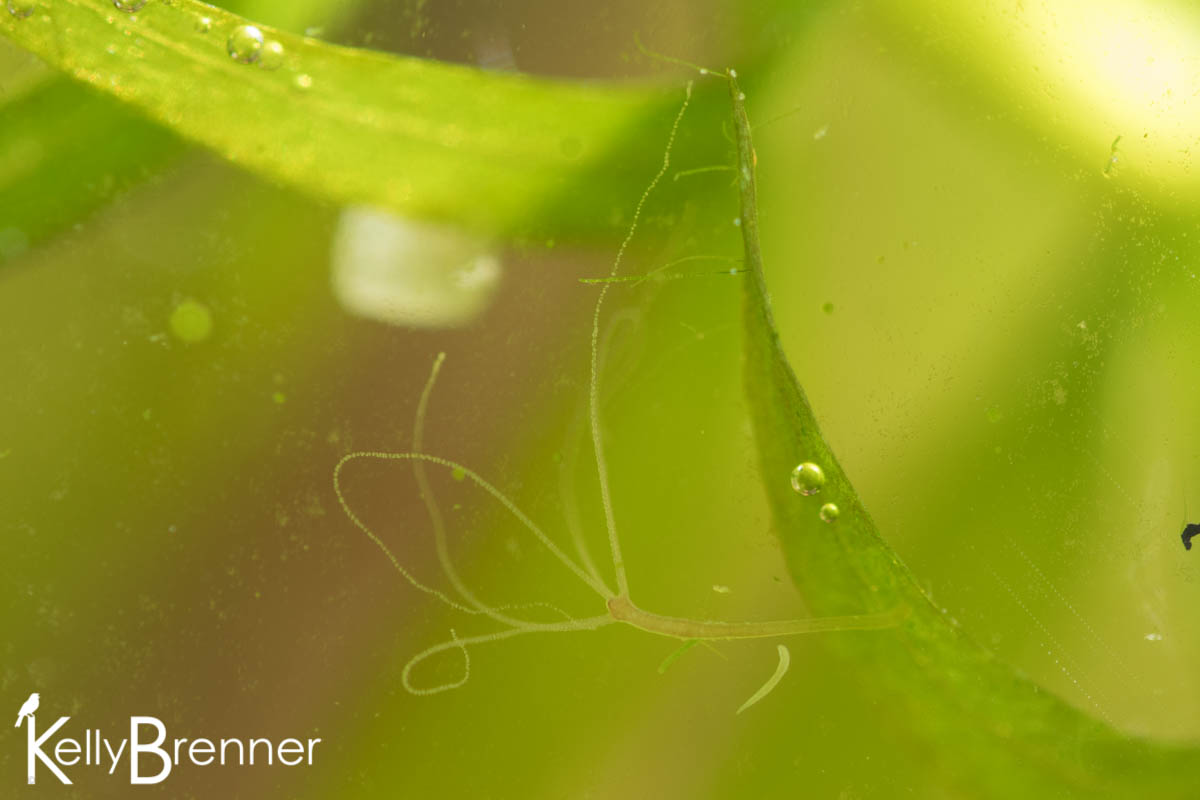 Ever since I discovered the hydra in my wetland in a bottle yesterday, on Day 241, I’ve been sitting in front of the container with my hand loupe, watching the life inside. The diversity in such a small, glass container is truly astounding. I’ve entered an alien world that I know almost nothing about and it makes me feel like an intrepid explorer making new discoveries. This is why natural history is so exciting and never dull, there’s simply too much to discover.

There are many individual hydra and I encountered at least a couple doing what appeared to me, to be eating water fleas. I watched one water flea, or daphnia, escape the tentacles of one hydra and drop to the bottom. As I’ve watched, I have also seen many small invertebrates, cyclops, daphnia and who knows what else. I’ve ordered two freshwater invertebrate books so I can start to learn about these mysterious and tiny animals.

As I looked, I found strange white masses of something that I first thought were eggs. When I moved the container, or if something swam by them, they contracted and moved, much to my surprise. They look like white fireworks, just after the fireworks explodes. I’m at a loss as to what they are and they’re so tiny, my hand loupe doesn’t illuminate much for me. I’m contemplating ordering another hand loupe with a more powerful magnification. Some of these invertebrates I can pull up and look at under the microscope, but some, like the hydra, are anchored to the glass wall or vegetation, and harder to remove.

I have the materials I need now to build the micro aquaria I mentioned on Day 237 and I plan to do that this week. Once I have that made, I can gently remove any hydra attached to a rock and place it in the micro aquaria to try and get better photos. My current method of taking photos through a round glass container is meeting with limited success because of the way the glass distorts the image.

I’ve also been taking videos of the wetland in a bottle and I’m going to work on putting them together to create a short video of the life inside.