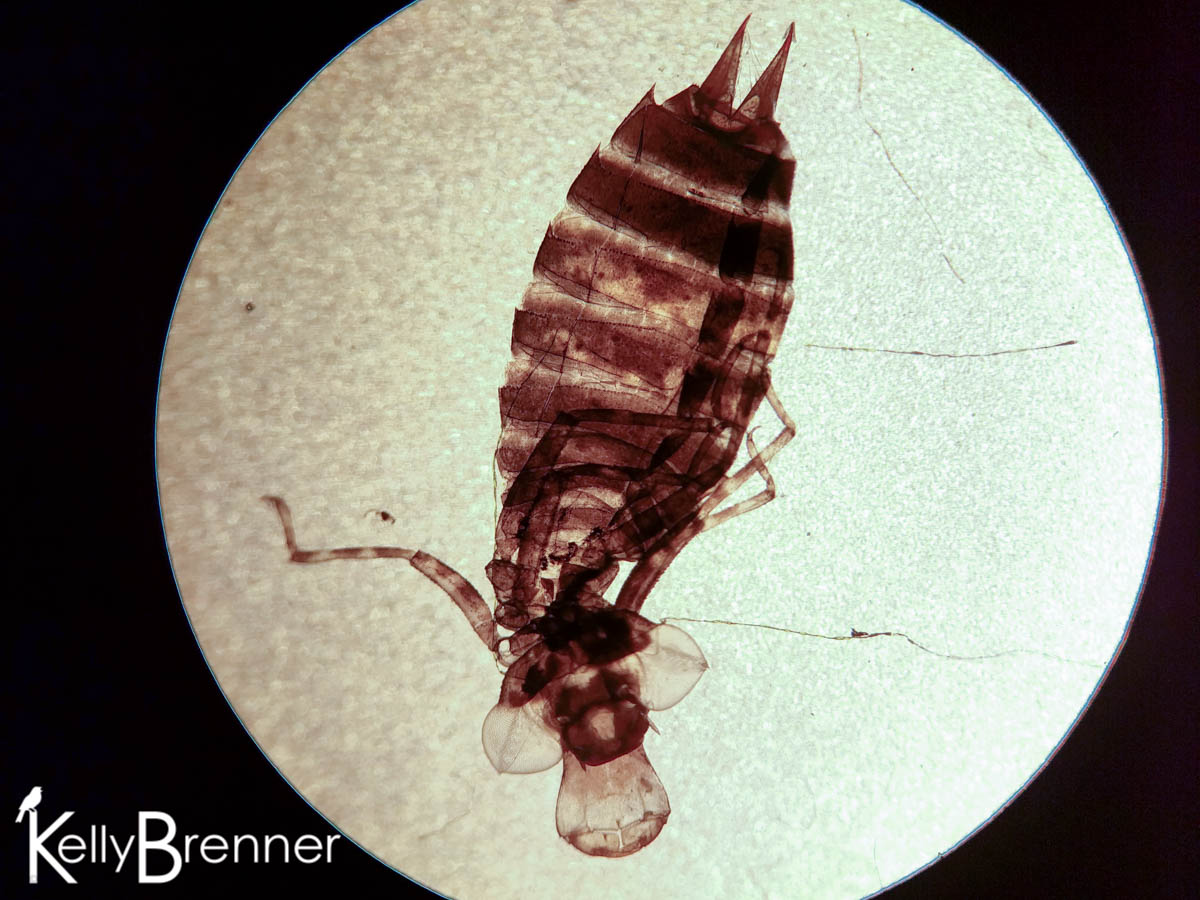 Yesterday afternoon, as I looked at my wetland in a bottle, an activity quickly becoming a several-times-a-day-habit, I noticed a dragonfly larva skin floating along the bottom. I grabbed a pipette and sucked it out, put it into a petri dish and looked at it under my dissecting microscope. Happily, the skin was empty, the molt of the darner dragonfly larva I spotted on Day 229. I’d only seen the larva in the jar a couple of times since then, it’s rather good at hiding considering the diameter of the container isn’t more than 9 inches or so. Fortunately, I had the foresight of putting a couple of sticks in the container, jabbing them into the soil and emerging from the water. The larva particularly seems to like the underside of one stick and it’s there I find it, if I can find it at all. The molted skin means it’s been growing, which I’m very glad of because it means it’s been finding prey in the container.

Looking at the skin under the microscope was fascinating, partly because although I pulled it out of the water, there were still many tiny invertebrates swimming around inside the skin. I tapped the petri dish slightly and it afforded me a great look at the labium, or the lower jaw. This jaw sits like normal when not in use, but when hunting, the labium shoots out from the mouth to grab prey, before pulling it back in.

In the wetland, I’ve also noticed tiny, white invertebrates swimming around, some tiny specks that go up and down in jerky movements. Others are slightly larger and when they swim to the glass I can look at them with my hand loupe. I posted a photo on Twitter yesterday and it was suggested the invertebrate was a daphnia, or water flea. In my wetland in a bottle class, daphnia were one of the invertebrates the instructor said we may find. I also spotted a red water beetle, which is different from the water beetle I spotted previously. I wonder how long any of the water beetles will last with a dragonfly larva on the loose.

Not long after I put the wetland in a bottle together, I had the bright idea to put a spare lazy Susan underneath it. I’m still congratulating myself this stroke of genius because it means I can easily turn the container around slowly, without disturbing the life inside, while getting a look all around the wetland.

Today I spent time watching again and pulled more invertebrates out with the pipette to look at under the microscope. One of the first I pulled out was a larger insect that swims busily up and down in the wetland jar. Under the microscope it was hard to see and I had to keep removing water from the petri dish to isolate it, because it moved so much. Eventually I got a look at it and I believe it may be a water boatman.

I also pulled out a dead mosquito pupa that I had found on Day 237 at the arboretum. To get it out of the container, I had to push a snail off of it which may have been trying to eat it. I put the mosquito pupa under the microscope and I was shocked when it started moving. I wonder if the hot lights on the microscope did something, because when I put it on my desk to look at something else, it stopped moving again. When I put it again back under the microscope, it once more began to move, twisting about.

Later, as I looked with my hand loupe at the wetland in a bottle, I was thrilled to find hydra, and not just one, but several of different colors. This was another invertebrate mentioned at the wetland class and I’ve been looking for them ever since. There’s a lot of algae in the container, which make them harder to see, but these caught my eye. Hydra are freshwater species related to jellyfish and sea anemones and it certainly shows. I watched them for a long time and when another invertebrate bumped into them, they would contract in on themselves, just like sea anemones do. They were also anchored to the rocks or the glass side of the jar, similar to anemones. But they were much longer than anemones and had fewer tentacles, which were also very long and in this they resembled jellyfish. I was so excited to find them, and such a diversity of size and color. The wetland in a bottle keeps yielding surprises.