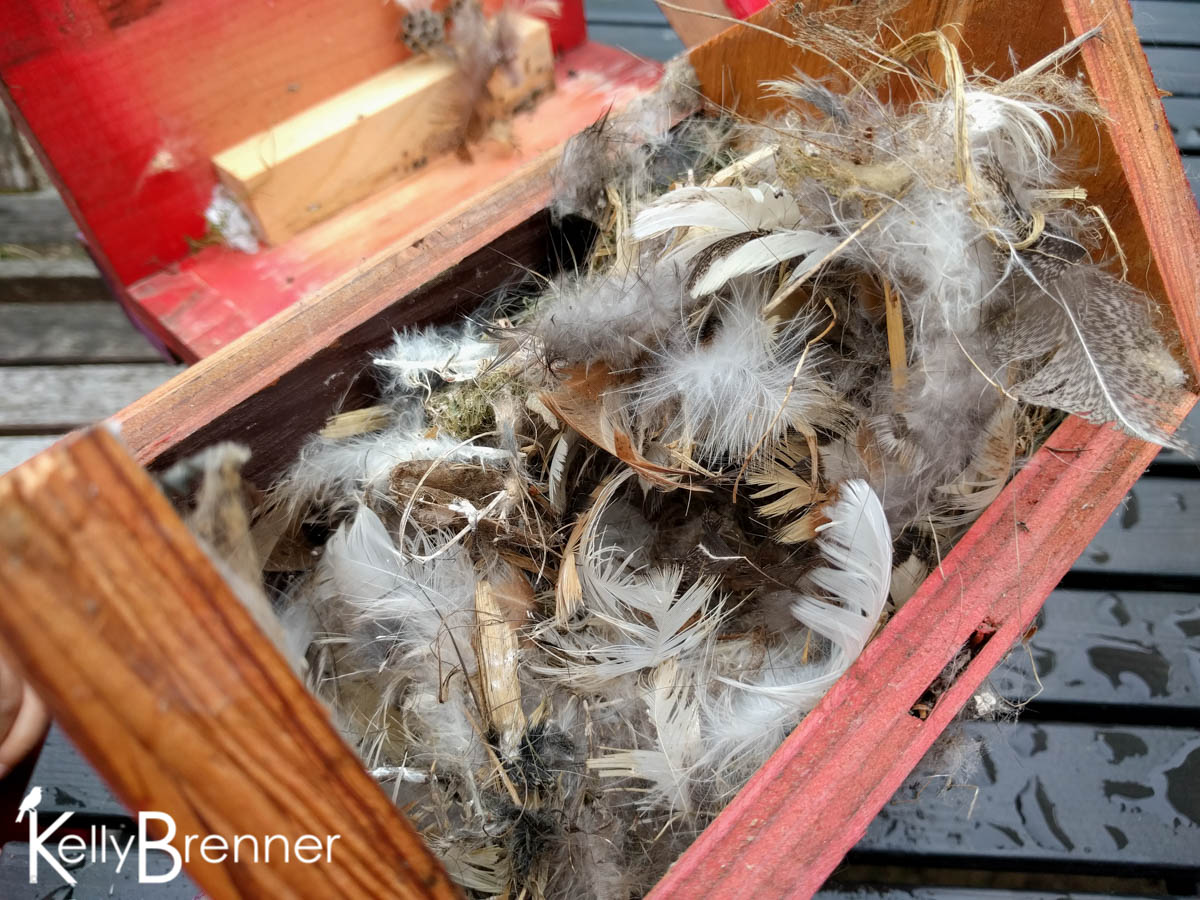 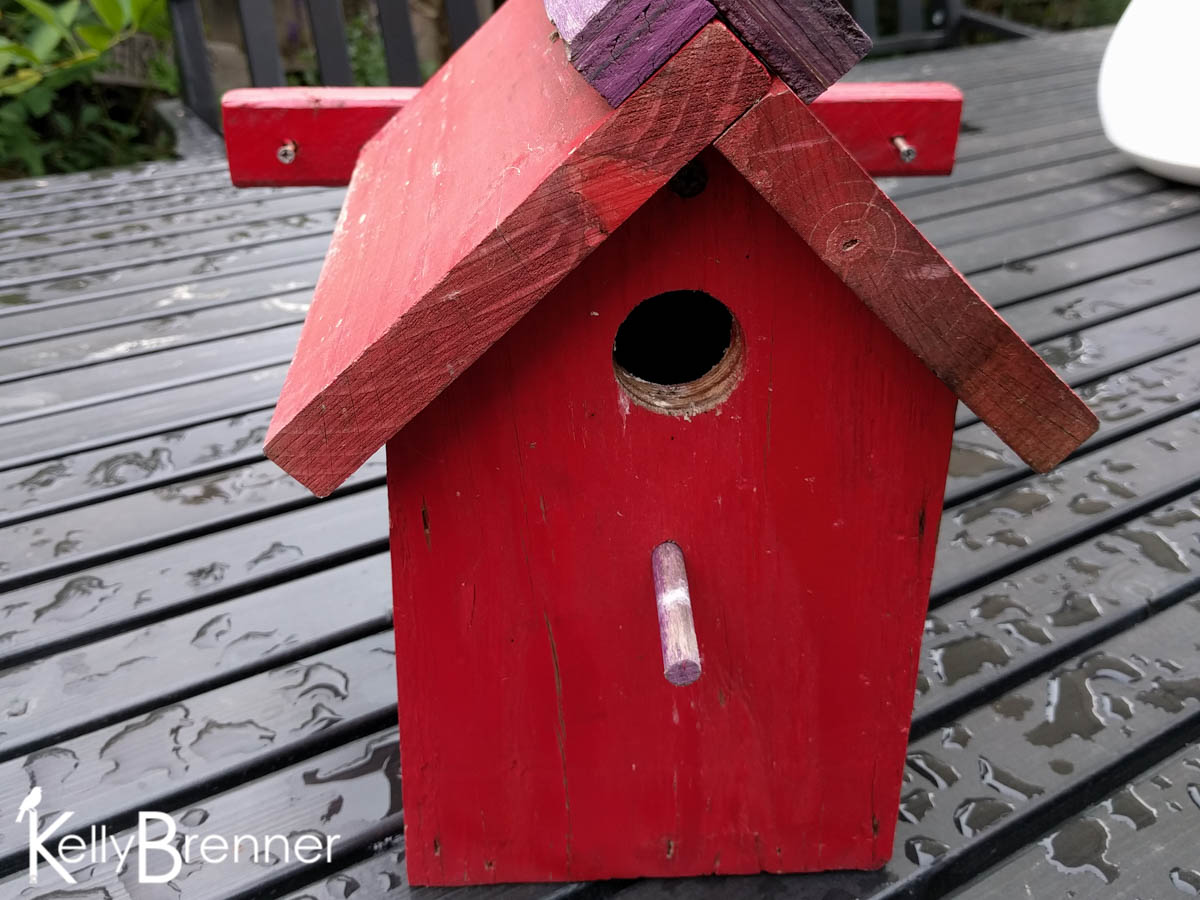 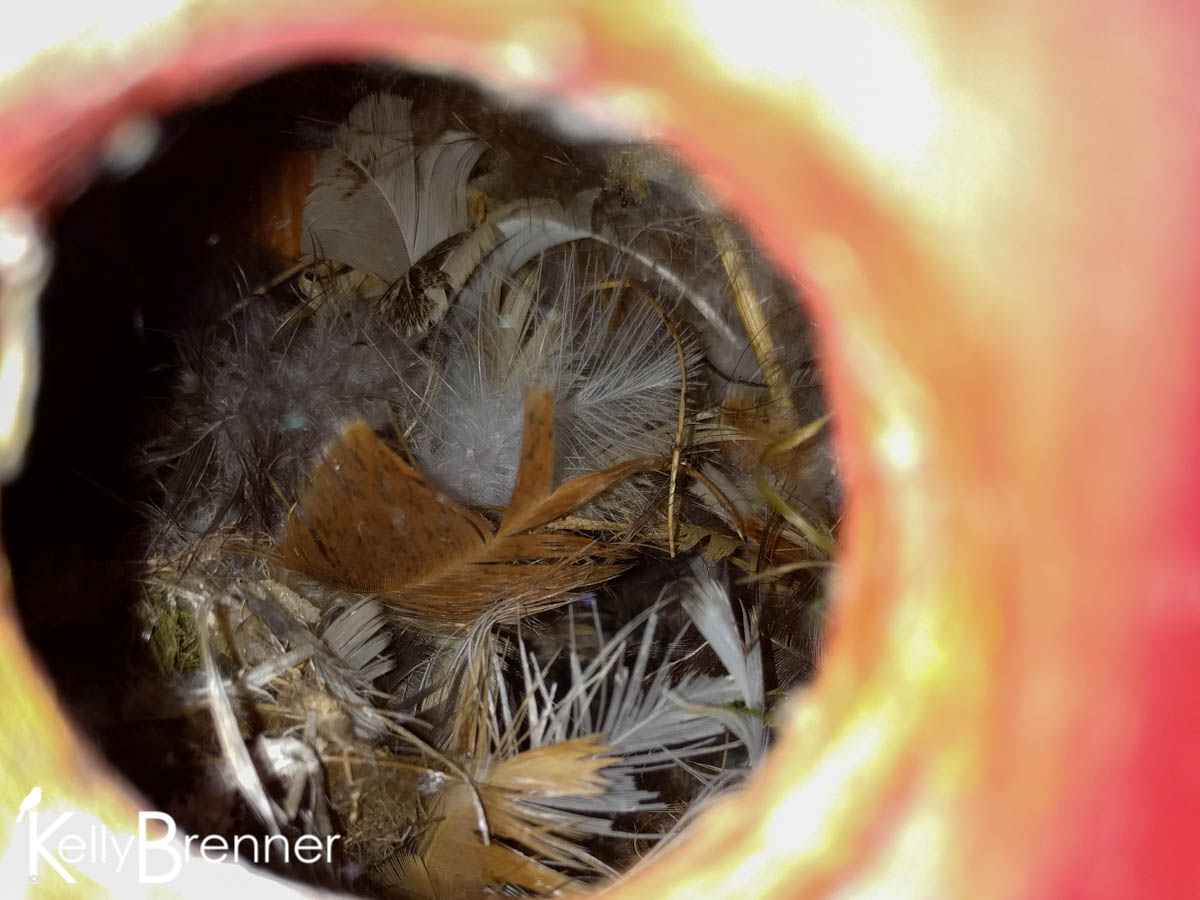 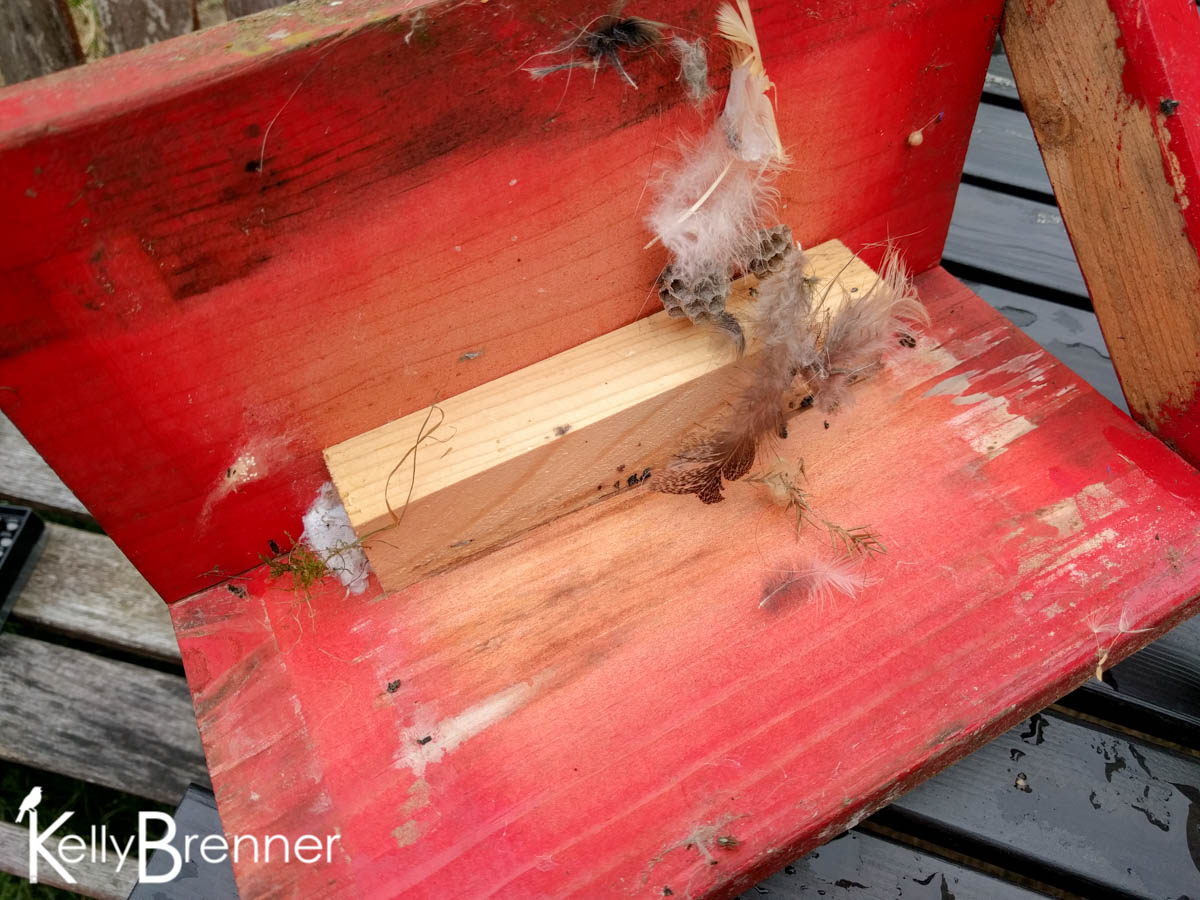 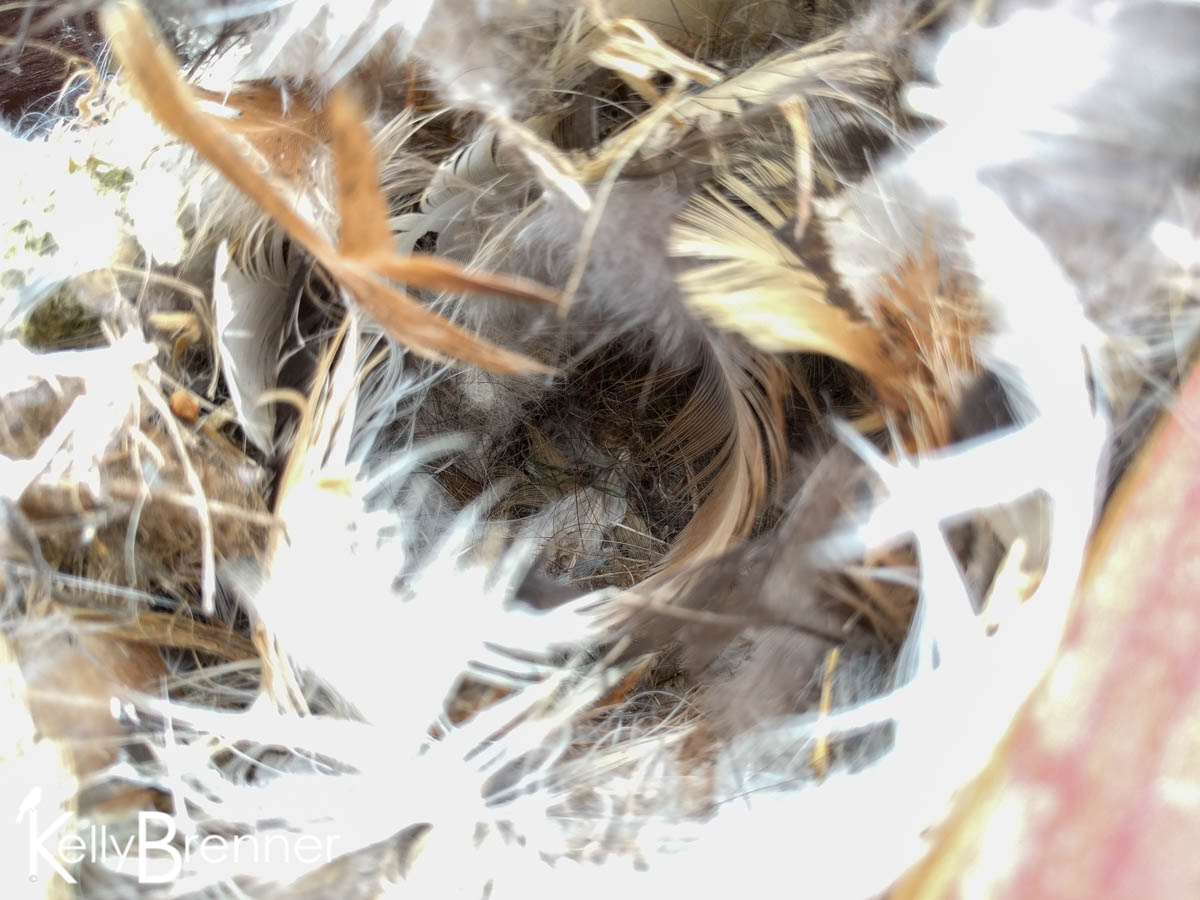 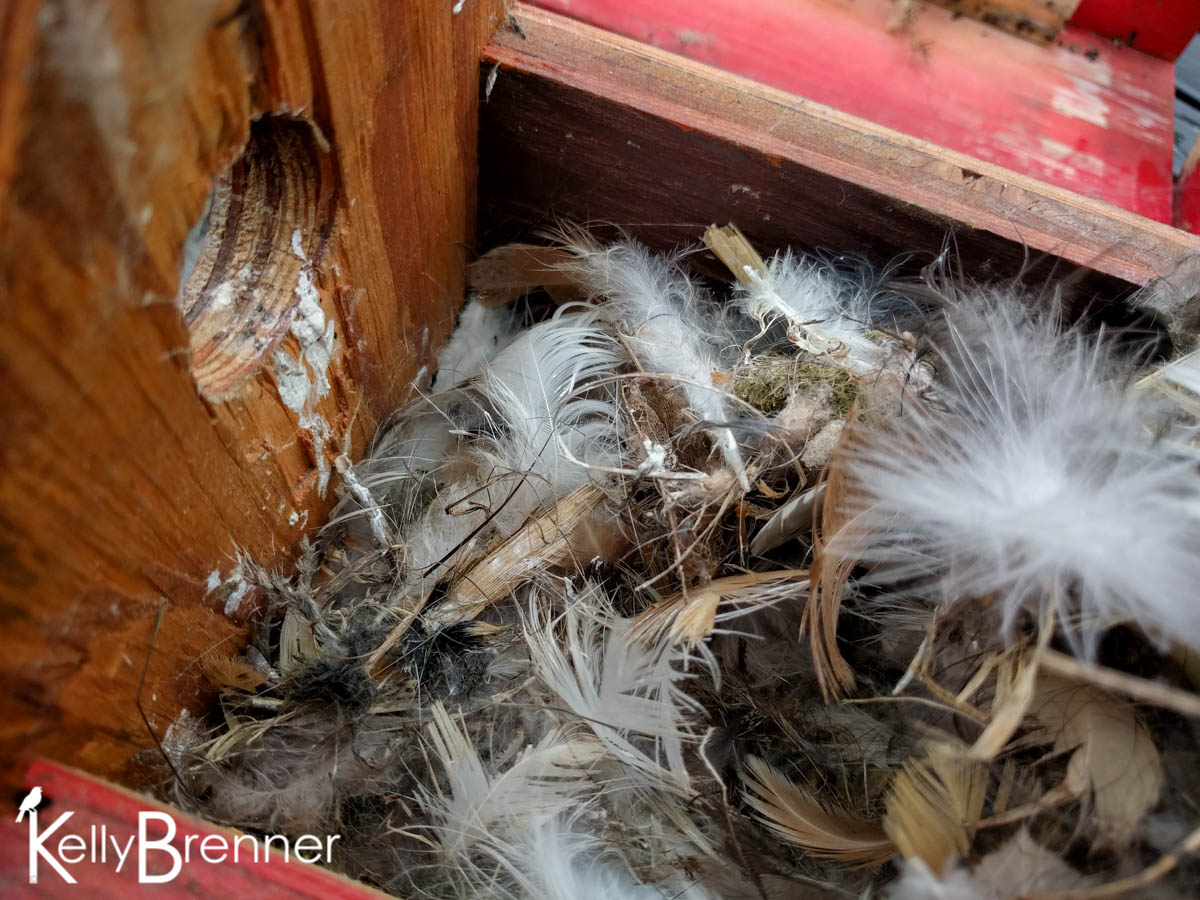 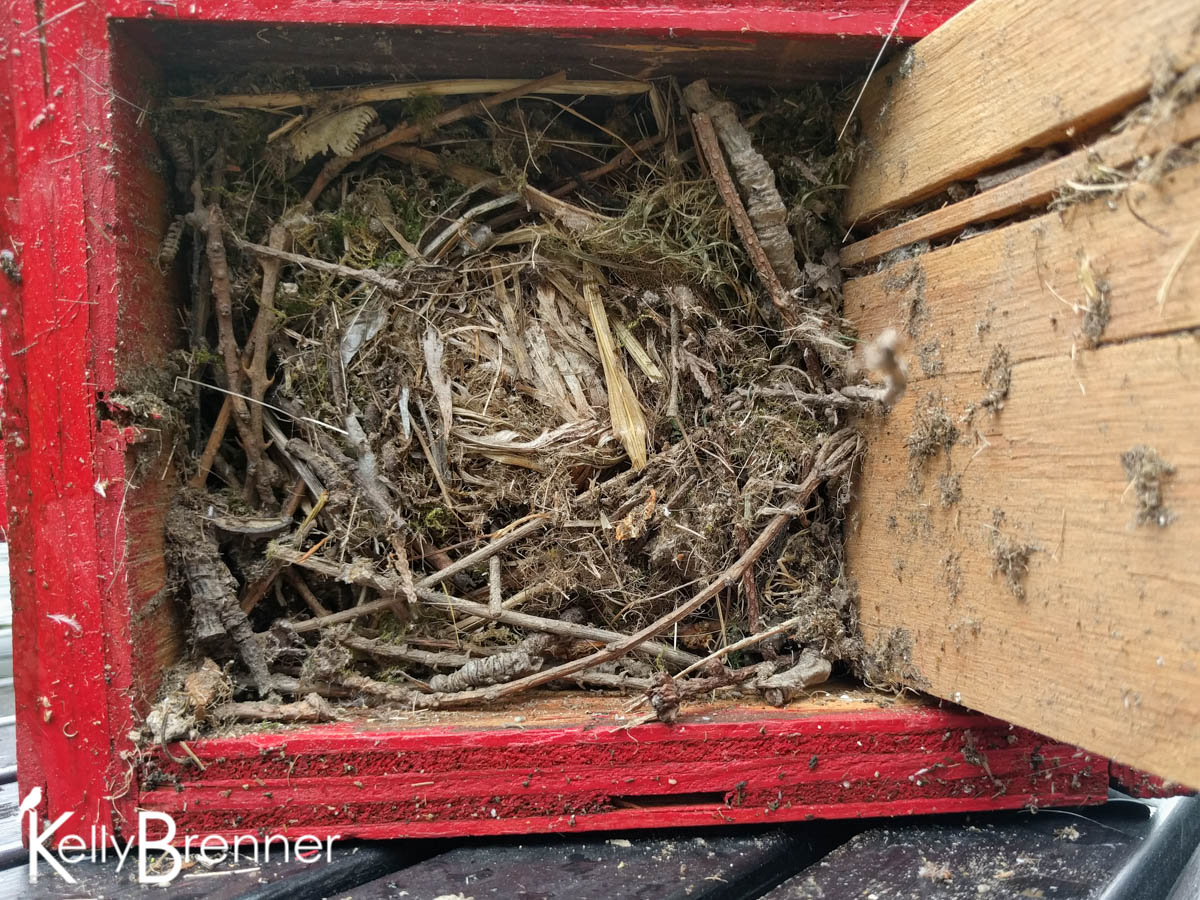 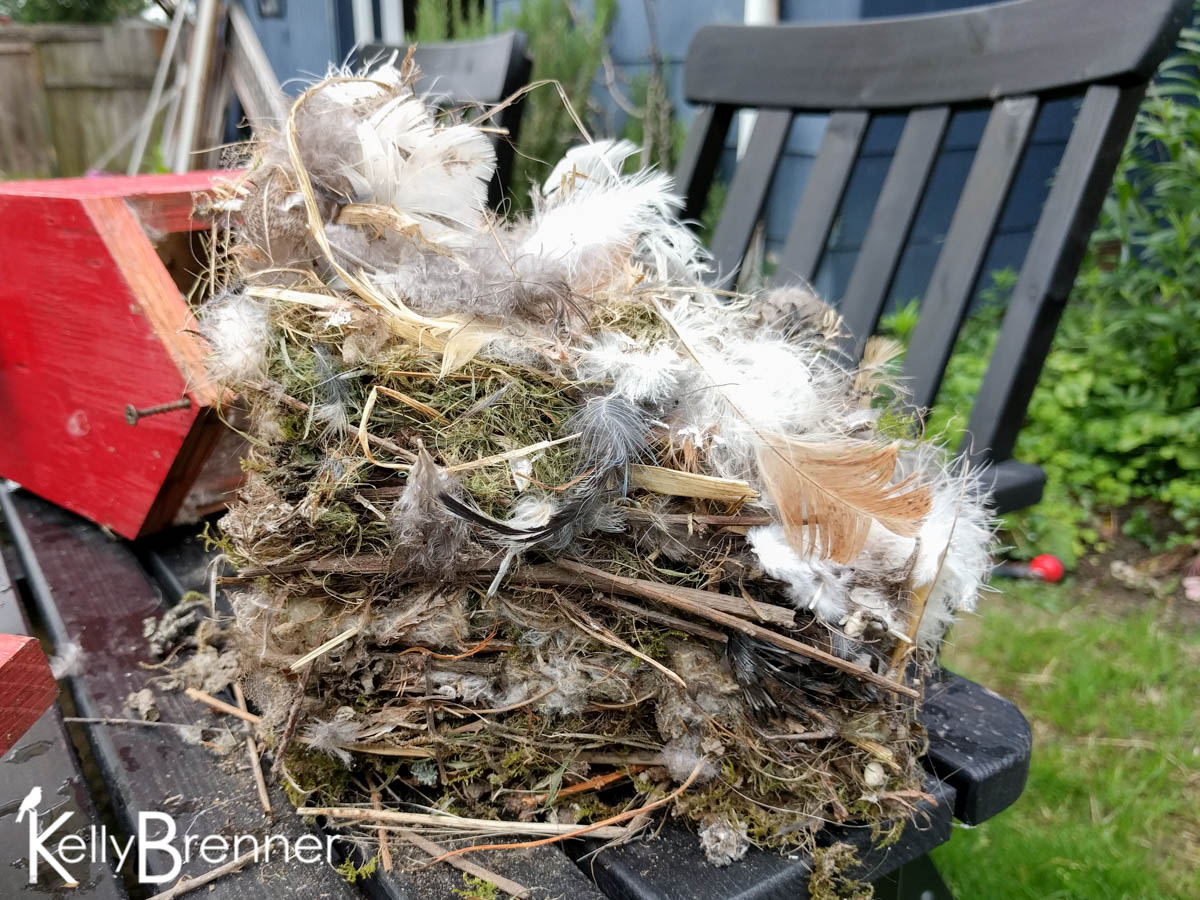 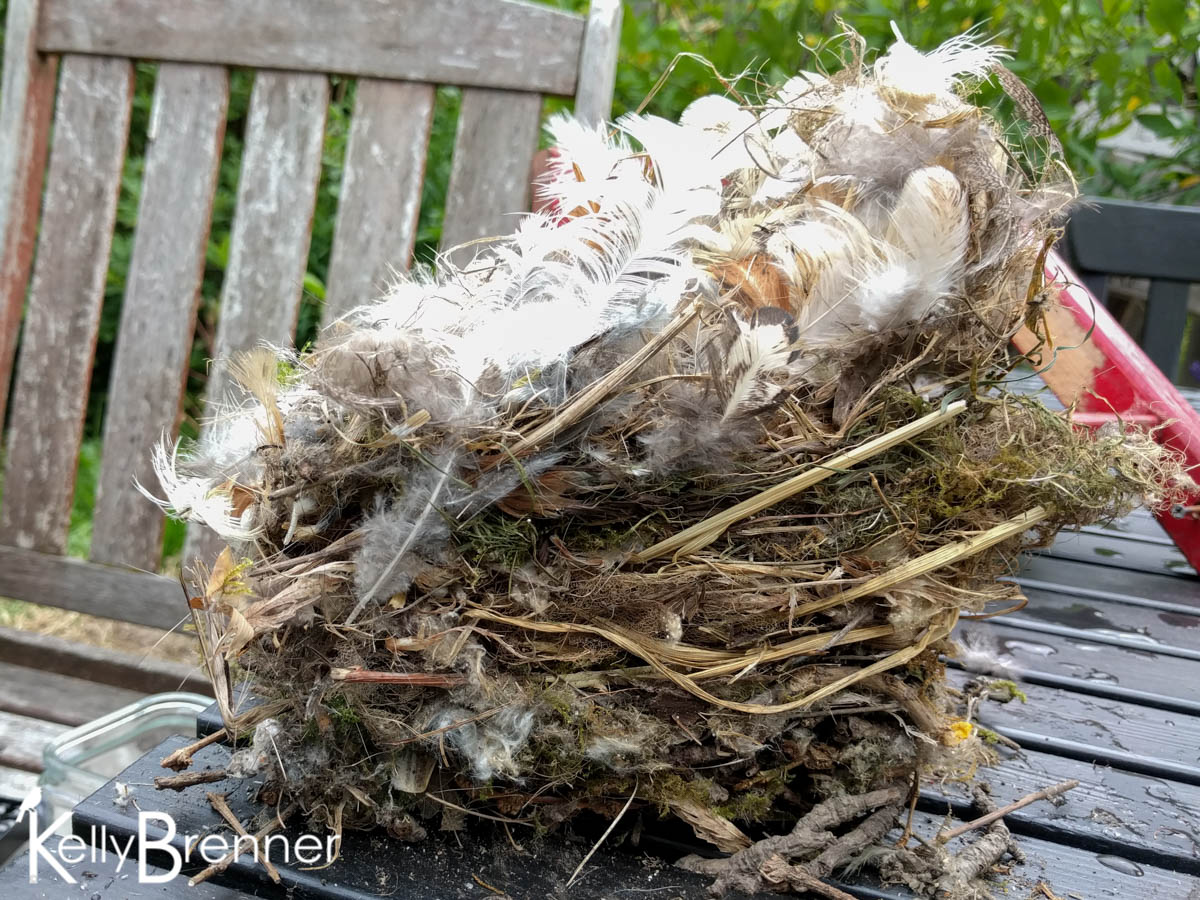 My curiosity about our Bewick’s Wrens nest has been persistently eating away at me since I first spotted them building in our nest box on Day 98. I watched them taking in sticks, sometimes with a great struggle getting them through the hole. I also watched them carry in many feathers, some of which I knew were from the chickens next door. While they were building I also saw them taking in grasses and mosses. Finally I heard the chicks begging and watched the adults taking all manner of insects in and out of the nest. On Day 140 I noticed the box looked abandoned. Since then I’ve been waiting to investigate the nest in case they came back. After some research I found that even if they have a second clutch, it will be in another nest. The male starts building the second nest before the first even fledge. Today I felt it was safe to open up the nest box and see what it looked like inside.

First I unscrewed the bottom of the nest box and lifted the flap open. I could see sticks lining the bottom of the nest, filling up the entire space. But I couldn’t see much more of the nest so I decided to open the top instead of just dumping the contents out. Once I lifted off the top I was surprised how full the nest box was. It was filled nearly to the top and all I could see at first were feathers, loads of feathers. I wondered where the birds even fit in this box because it was so full of feathers. As I looked closer, I could see a small rounded hole in the feathers, near the back of the box. That area, which couldn’t have been much larger in size than a golf ball, was padded down into a snug sphere.

As I poked around I could see moss and grasses as well and I disturbed ants and spiders. It appears tiny ants made use of the nest and have made into their own nest. I’d also read that the wrens will collect spider’s egg sacs for their nest and I did see a few inside. But whether the wrens brought them or spiders laid them there themselves, I couldn’t say. The top of the nest had two small wasps nests hanging from the inside, but they looked incomplete.

The nest looked so loose that I worried if I pulled it out, the entire thing would collapse in a heap. So with great care I slid the nest out on its side and to my surprise, it held together fairly well. A few sticks from the bottom fell off, but overall it held its shape. Looking at it out of the box, it was fascinating to see how it was layered. Almost like a cake. I didn’t notice at first, but it looks like a chick was layered into it. You can see some feathers and a leg in one photo on the right hand side. I’ve read that sometimes when chicks die, they’re too big to be carried out and so are just buried in the nest.

Unfortunately I didn’t have a container large enough to hold it so I put it in a plastic bin and left it in the garage. Hopefully the ants and spiders will vacate it now that it’s not enclosed in a box. I’m hoping to find a container to keep it in long term. I often bring things inside and put them in my curiosity cabinet, but I’ve learned the hard way to freeze them so pests can’t get inside. The nest is much too large to freeze though, so I’m not sure if it’ll make its way inside or not. Especially with a decaying chick inside. 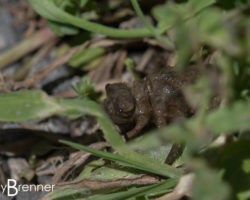 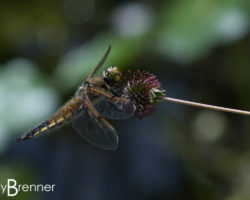