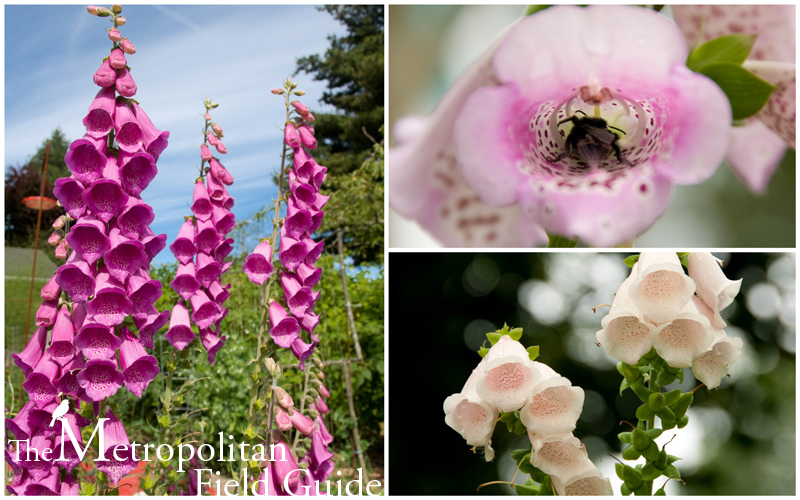 You would never know that Common Foxglove (Digitalis purpurea) is not a native plant of North America considering how abundant it is in certain regions like the Pacific Northwest. This flower was introduced from Europe and is found in gardens, and has naturalized to spread to roadsides, fields, forest edges and other disturbed sites around the country. It’s a widely popular garden plant because of it’s dramatic form and color.

Foxglove is a large, biennial herb which can grow to nearly six feet high. The first year the plant produces the foliage but the flowers don’t generally come until the following year. The leaves are alternate, toothed, lance-shaped, green with hair on the top and gray fuzz underneath although what is more noticeable are the large, colorful flower stalks. The flowers are purple, but some populations produce a wide range of colors and bloom during the summer months, usually June and July. The petals are fused together to produce a tube with a wide opening and spots inside. The lower lip of the flower acts as a landing pad for pollinators. 20-80 individual flowers can be found loaded up on each stalk and they typically are only on one side of the stalk. The fruit are capsules in the shape of an egg and very small and each plant can produce up to 5,000 seeds.

The Foxglove is also highly poisonous,  and all parts of the plant contain cardiac glycoside digitoxin which affects muscle tissue and circulation. Despite some risky use in days past, it is widely used today in treatments of various heart conditions. An overdose however can cause nausea, a weakened pulse, fainting, heart failure and eventually death.

In Europe where the plant is native it’s visited by a wide variety of insects including honeybees and bumblebees as well as butterflies and moths and is a host plant for some species of moths and butterflies. Here in North America you’d be hard pressed to find a Foxglove in flower without any bumblebees or honeybees climbing in and out of the flowers. Here it is also drought tolerant, shade tolerant, fast growing, produces nectar for hummingbirds and is deer and pest resistant.

However, it’s not quite the magical plant that it sounds like and can become a minor invasive species. In some locations, such as California, it’s listed as an invasive species by certain organizations. It’s also a danger to domestic animals who may try and consume it, due to its toxic nature. Even the water cut-flowers are placed in may pose a certain toxic risk and should be disposed of appropriately and kept way from house pets. While it provides a benefit not only to gardeners, but to pollinators, it’s perhaps not the most ideal plant to select for a wildlife garden because of its toxicity as well as its ability to escape easily and spread. 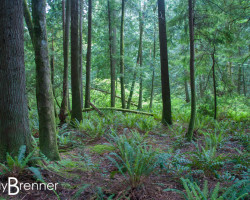 Plants of the Pacific Northest Coast: Washington, Oregon, British Columbia & Alaska features nearly 800 plants common to the coast of the Pacific Northwest and is one of my most often referenced plant books. Boasting over 1,000 each photos and drawings,

News Access to wildlife should be a right, not a privilege:: An interesting article from the Guardian which discusses "that every child and young person has the right to grow up and live in a high-quality, wildlife-rich environment with ready access to the