The Wildlife Design Competition from the Holbeck Urban Village in Leeds has just closed and the winners will be announced next month. This is the second year of the competition and before the winner is announced, let’s take a look at last years winner. A wildlife high-rise skyscraper was the winner last year by Garnett Netherwood Architects. The 40′ tall structures are made with reclaimed building materials and sit along a canal. The tower is aimed to provide habitat from all kinds of fauna including butterflies, bats and birds. The judges liked the design and said the following about it:

The Urban Takeback design had the right balance of ambition alongside a sensitive understanding of the local environment. Also, its high visibility gives it potential to be a focal point for engaging and attracting the community.

However, the design is entirely conceptual as the designer had no wildlife expertise and would require some consultation to improve the design and make it usable to wildlife. Even if it’s never built it has sparked a fair amount of attention and started some good conversation about the idea of urban habitat.

There’s a good article about it from the BBC:: Can animals live in high-rise blocks?

Another article about it on the Wildlife Extra News website:: Wildlife skyscraper wins design award 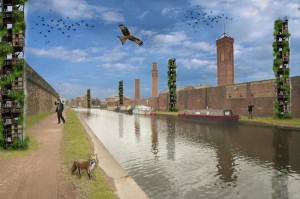 There were other entries as well that you can read about, one that includes an urban hedgerow and interesting looking bee houses:: informal architecture blog

Another design by a UC Berkeley student can be seen here (scroll down to March):: Butterfly Pillow 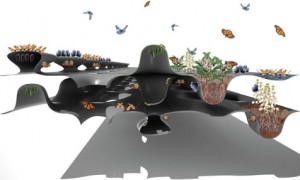 Why? Ecosystem Services:: The Pollinators

The first question many people will ask when you tell them you want to create habitat is why, which often comes before the how. It's important to formulate an educated response to the why