The second post in the Why series is going to look at a significant aspect of the importance of wildlife, the cultural perspective. Most species of wildlife have played important roles in human culture in the spiritual realm, fashion, the arts,  folklore and myth, food, literature and many further aspects. Insects may often be overlooked as important wildlife, but they have a rich history in the lives of humans and there’s now a study of it called Cultural Entomology.

Insects have long had an influence on humans as far back as 2200BC with imagery of the scarab. Some have been made into gods by different cultures such as the Aztecs, Greek, Chinese and Babylonians and the Scorpion is a Zodiac symbol. Beetles can be connected to many religions including Shamanism, Buddhism and Taoism. The importance of the scarab to the Egyptians was immense and had solar symbolism, the rising and setting of the sun, which eventually came to represent life and death and was used a great deal with mummies and tombs. 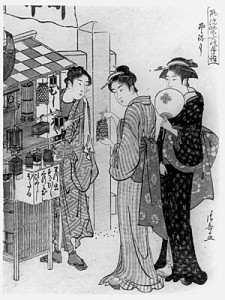 Music has also been influenced by insects such as with The Flight of the Bumblebee, but they have also been used like birds, for their singing. Crickets were kept by Greeks, Japanese and Chinese who enjoyed their singing. The Chinese used the cricket as an agricultural aid as well because they were the best indication of the changing climate and told the farmers when to plant their crops. Their importance can possibly be shown by their appearance in the Chinese word for autumn “Qiu” the character which is in the shape of a cricket while the word for summer “Xia” is in the shape of a cicada.

The cicada may have been as important as the cricket, if not more so. To the Chinese they had much the same symbolism as the scarab to the Egyptians, as a sacred symbol of rebirth, or life. Like the Egyptians, the Chinese used them in death as well with cicada carved jade pieces that were placed in the mouth. They were also used medicinally by the Chinese and some species still are today.

They have been used in religious art, indigenous art and modern art such as with M. C. Escher. Beetle wings have been used in textiles by many cultures including Amazonian tribes on headdresses and other ornamentation and Victorian ladies on their dresses and fans. Many Japanese family crests incorporate butterfly designs. 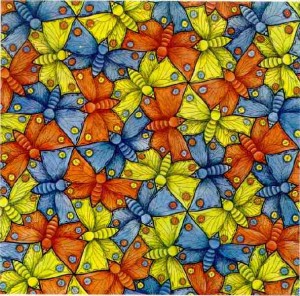 Butterflies have perhaps the greatest influence and symbolism throughout the world. The ancient Greek name for butterfly was psyche which also meant soul and breath and they figured into Greek mythology. The ancient Mexicans studied them in great detail and butterflies can be found in writings, poems, songs, paintings and other representations of animals. They had names for all of the butterfly’s lifecycle and even named places for the butterfly such as Papaloapan, butterfly’s river. The Native Americans also had beliefs about butterflies, often tying them to sleep. It was said that butterflies brought dreams and mothers would embroider the symbol for butterfly on on a piece of buckskin to tie to the child when she wanted them to sleep. They were also important to the Hopi’s and can be seen on Kachina figures.

Even modern culture embraces insects and we all know these famous influences, Jiminy Cricket, Charlotte (Charlotte’s Web), Spiderman and The Beatles. Just look around yourself and see where you see the influence of insects.

This only skims the surface of the cultural significance of insects, read some of the articles below for more information or check out some books on the subject.

The Butterfly and Moth as Symbols in Western Art

Insects and Humans: a relationship recorded in visual art (PDF)

Day after day I research and write about urban wildlife habitat and as a city dweller I see a lot of pigeons, crows, starlings and juncos, but last night I was pleasantly surprised to find an Anna's Hummingbird on my

The City of Portland has recently added a whole series of ecoroof seminar videos in addition to the slides they already had on their website. The seminar videos are a good resource for learning