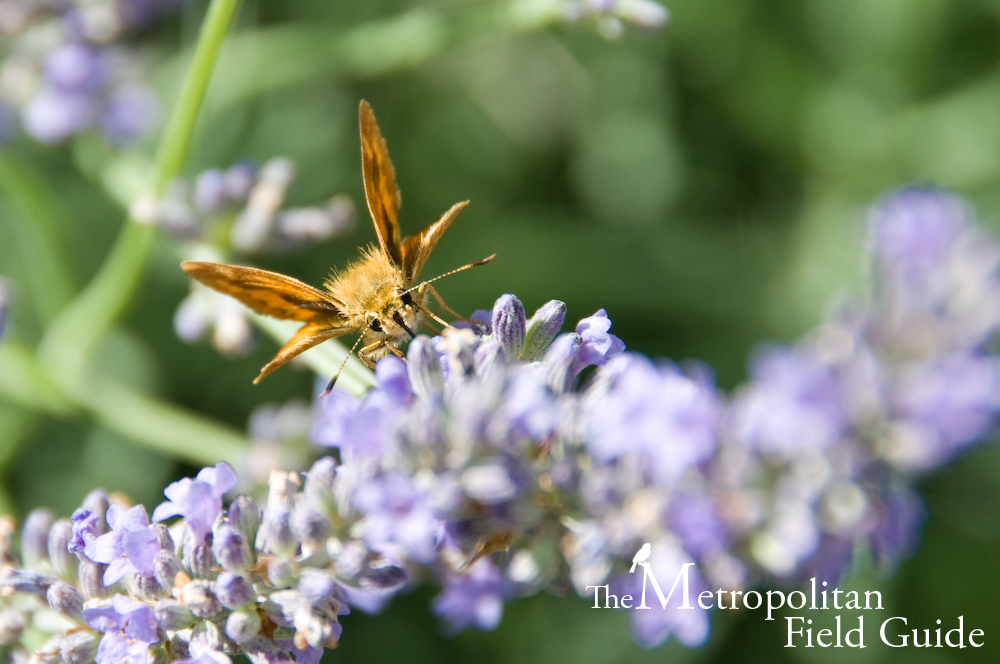 The Woodland Skipper (Ochlodes sylvanoides) is one of the few butterflies that is almost entirely tolerant of urban habitat. Over the last few weeks I’ve seen these tiny butterflies, often by the dozens, covering lavender plants throughout my neighborhood in the city. Their tolerance is easily illustrated because, unlike many butterfly species, a camera lens in their face doesn’t bother them in the slightest. They can be found not only in the city, but also in a wide variety of habitats, so many in fact, it’s easier to list where they’re not found, and that is the desert. They can be found on the west coast as far north as British Columbia, south to Baja California and east to Alberta, Colorado and New Mexico.

These little orange and brown butterflies are in the Skipper family and specifically part of the Grass-Skippers. They are a bit peculiar because when landed, their forewings don’t open all the way while the hindwing does open flat, giving them a unique appearance. They are abundant from July through October and in late summer and early fall can be the most common butterfly seen. They can even be seen as early as June in some areas. They are orange and brown with more contrasting markings on the top of their wings and more subdued markings underneath. The larvae are light green, yellowish or cream while the egg is white.

Interestingly, even though this is a common, wide-spread species, there is no scientific literature about the specific larval host plant species. What is known is that it’s grass, and often a broad-leaf grass native or non-native. Other than that, their plant preference and natural history is unknown.

What is not unknown is what the adult will use as a nectar plant, and that is just about as wide-ranging as their habitat choices. Among others they like lavender, black-eyed Susan, dandelion, aster, lobelia, marigold, oregano, statice, bluebeard, oxeye daisy, garden sage and many more. It’s a shame they’re not studied more, perhaps there is something to be learned from them. They are truly one of the most adaptable wildlife species out there.

Learn how to landscape for butterflies with this post from The Metropolitan Field Guide: Design for Butterflies. To find plants for butterflies, visit the Regional Plant Lists for Wildlife resource page at the top of this page under ‘Pages’.

UPDATE:: Thanks to Mauri for commenting on The Metropolitan Field Guide’s Facebook page drawing attention to this same species in Europe and part of Asia where it is called the Large Skipper. Despite being on another continent, this butterfly still shows the same durability as in North America by being present in many urban habitats. In Europe they know what the preferred larval food plants are and they include False Brome, Purple Moor-grass, Tor-grass, and Wood Small-reed. For more information on the butterfly in Europe visit this excellent page with photos from all of the lifecycle stages and descriptions of behavior; UK Butterflies.

Kingfisher in Cambridgeshire via:: Guardian This was mentioned in a recent Foragings post, but it has such great design implications that I wanted to feature it in more detail. Over several years a landowner has turned previous agriculture

News Urban birdlife: encouraging peregrine falcons in London:: from Ecologist highlights the Peregrine Falcons found on some of the most iconic buildings around the city such as the Houses of Parliament. Spotting wildlife in Bengaluru:: from Citizen Matters in Bangalore is an