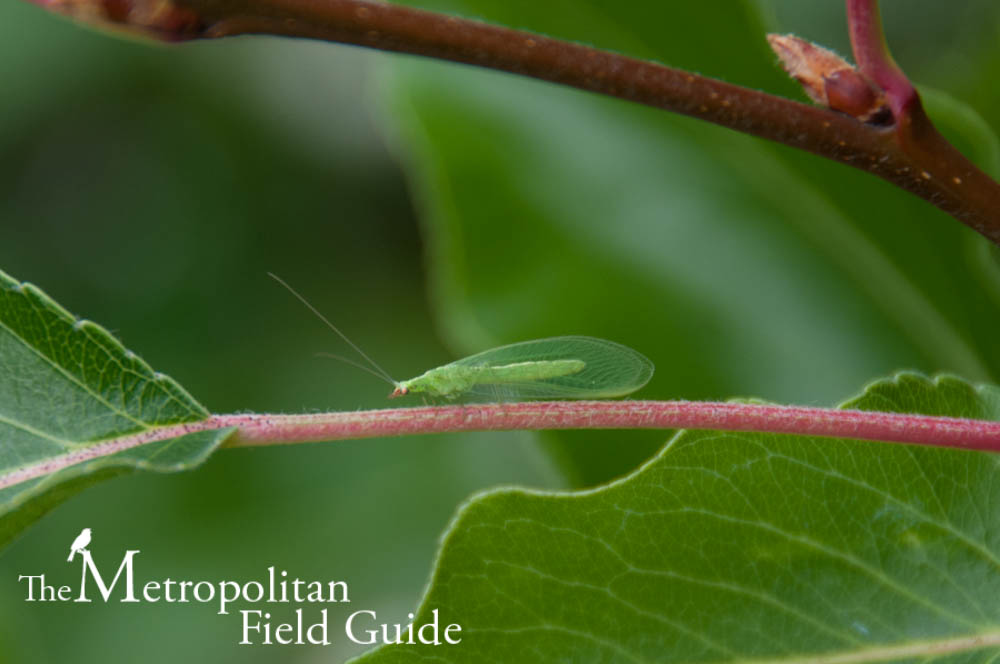 Lacewings are in the order Neuroptera, which also includes about 5,000 species worldwide, and Chrysoperla carnea is the most common species found throughout the United States. They are voracious predators of many insect species including aphids, caterpillars, thrips, mites, mealybugs and almost everything else with a soft body. There are many species of green lacewings, as well as less common brown lacewings. The brown lacewings are more nocturnal than the green lacewings and they also prefer woods, so are less likely found in an urban setting and less likely to be encountered.

Lacewings undergo a complete metamorphosis with four stages; egg, larva, pupa and adult. An adult lacewing can lay up to 200 eggs, which are very small and attached singly, or in clusters on the end of silken strands attached under leaves.  Once they emerge, the larva goes through three instars, or growth stages, lasting two or three weeks. Because the larvae don’t have wings they stick around where they hatch, but if they can’t find food they will die. Some lacewing larvae will camouflage themselves with plant debris, the remains of their prey or even their own excrement. It was thought this was to trick their prey, but now it’s believed this is to escape their own predators.

Like moths, Lacewings will pupate in silk cocoons tucked away under leaves or in cracks in bark. In another week the adults emerges to mate and the female lays eggs. They have four wings, like dragonflies except they fold them over their back like a tent, and their flight pattern is very different. Most will only survive for five to six weeks, however some species in some regions will overwinter as adults. Many species of lacewings look similar and in fact one of the few ways to distinguish certain species is by their mating song. Each species has their own song and females will not mate with a male unless he is singing their particular song. Green lacewings will fly at night, although less often than that brown lacewings, and like moths, they can be attracted to light.

Lacewings are well known and well liked by gardeners and farmers for their predation on pests. They are very similar to lady beetles in their feeding habits, particularly with aphids, but the Lacewing can eat far more. A larva can eat up to 200 pests in a single week. The lacewing larvae have modified jaws that grab and hold insects and suck their insides out leaving behind an empty husk. Some adult lacewing species feed on insects, but others stop being carnivorous as adults and instead feed on nectar, pollen and even honeydew from ants.

Because they are so beneficial not only to gardeners, but also for agriculture, lacewings, like lady beetles, can be purchased commercially. Unlike lady beetles however, they usually arrive in the larval stage making it must more likely they’ll stay in the intended area. While not as well known or popular as the lady beetle, they are worthy species to study and attract.

There are several ways to landscape for lacewings, the first being the planting native plants. Of course, just like when designing for all wildlife species, avoid pesticides which kill indiscriminately. Use a variety of flowering plants that will bloom throughout the season so there is a constant supply of nectar and pollen. Shallow flowers provide easy access for lacewings and among plants they are known to like include species from the daisy, carrot and dill families. Water is another component and can be provided in many ways, but placing a platform, such as rocks, in the water will give them somewhere to safely drink. Of course tolerating some level of aphids or other pests is a necessity otherwise there will be no food for the larvae.