The Parks of Seattle Project 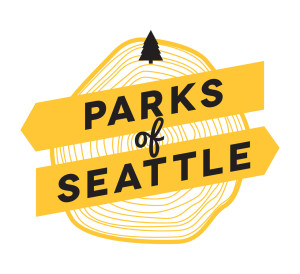 If you haven’t been following the Parks of Seattle project, you’re missing out. Dave Battjes has decided to create a logo for each and every one of the 400 plus parks and green spaces in the city of Seattle. For almost a year, since August of 2012, Dave has produced logos in a wide variety of styles. Each completed logo is posted on his blog, Parks of Seattle where you can see them all.

It’s fascinating subject matter and Dave’s logos evoke not only a sense of each park, but an overall sense of the Pacific Northwest and Seattle. With 400 parks in one city, it’s impossible to be familiar with more than a small fraction of them and this project helps highlight the features of many parks.

I’ve been following the logos for awhile and I became curious why someone would take on such a massive project like this and why pick parks as the subject. Dave was kind enough to answer my questions about his work and interest in parks and urban nature.

Dave Battjes graduated from The Art Institute of Seattle with an Associates degree in Graphic Design back in 2010. He did an internship at Dumb Eyes and got a job with them after that. He roasts coffee, is an avid recycler, paints, draws, and loves everything creative. He gets cranky when he hasn’t hiked or camped in a while. He’s a “jack of many trades and a master of none”. He likes to stay open and positive to get the best out of life.

What inspired you to start this very ambitious project?

I wanted to start a project that would keep me creating something everyday. I had recently stumbled on to Nicole Meyer’s project, Branding 10,000 Lakes and felt inspired to try something similar. I always wanted to visit every Seattle Park but didn’t think I had the time. This has been a way for me to express that desire.

Are you by chance a graphic designer professionally?

I am! I have been on a small hiatus in Michigan learning how to roast coffee at Madcap Coffee Company. It’s an amazing process and I get really geeked about great coffee. I do plan to return to design but I haven’t decided what that will be yet.

Why choose parks as a subject?

I love parks and public spaces in cities. There’s no better way to catch the attitude of a city than by simply sitting in a park and watching what people do. That sounds creepy. I really mean that the value of a city is told through a person’s day to day life. If people stop to enjoy where they are and interact with their surroundings they create a positive atmosphere. Seattle has a very unique park system that allows residents to unplug and connect with nature. I really appreciate that.

How many of the parks have you been to in person?

Not as many as I’d like. I haven’t even visited half of Seattle’s parks. But once I started this project I began see all the great spaces I’d been missing. I plan to visit every park in the future. Had I not started making these logos that may never have happened.

Do you get different inspiration based on whether you’ve been to, and know the park?

Oh yeah, some times it’s really helpful and other times it makes designing a logo really hard. I spent a lot of time at Seward park just after my son was born. My wife and I would drive along Lake Washington Boulevard trying to get him to fall asleep. When he woke up we would lay out a blanket under the trees and hang out. I have so many good memories there. Seward Park has a rich history and beautiful forest that many creatures call home. It was impossible to design anything I would be happy with. I scrapped everything I started for days. In the end I just did something so I could free my mind and move on.

How do you choose one aspect from each park to feature in that park’s logo?

I get most of my information on parks I haven’t visited from the Seattle Parks and Recreation website. Sometimes an aspect of a park just begs for attention like Marvin’s Garden’s bell tower. Other times there isn’t much information or the park is nothing more than a small overgrown triangle and I get to use my imagination.

What are your favorite Seattle parks to visit?

As I said before, Seward Park is an important place to me but so are many more. I’ve seen some crazy things in the Freeway Park, early mornings on my way to work. I’ve spent many days sitting in the grass at Cal Anderson. I’ve hiked through the Washington Park Arboretum too many times to count. There are so many amazing parks in Seattle. I could never pick favorites but I tend to like the parks that are very natural or offer lots of interesting human interactions more.

What is the best or most memorable wildlife you’ve seen in a Seattle park?

From the seals at Golden Gardens to the herons of Marsh Island I’ve been surprised many times. My best moment was when, quite by chance, I was able to catch a squirrel along some steps at Freeway Park. It was early and I was jogging down the stairs at the southeast end of the park. A squirrel was running along the ledge about half a step in front of me. Without thinking much about it I lunged forward, grabbed the squirrel and quickly let go. It whipped around and staring at me straight in the eye, made some irritated squeaks before running away. I don’t think many people set out to catch a squirrel but I’m happy to have had the experience. I hope the squirrel can say the same.

Have you found through your project people are wanting to visit parks more?

I hope so. It would be really great if Parks of Seattle inspired others to get involved with their local parks programs or volunteer with the city.

What kind of feedback have you been getting?

I get positive feedback from those that have been following on social media. Any feedback on Parks of Seattle has been good in my eyes. I think projects like these get people’s minds working creatively.

How has this project affected you and your view of parks?

I love parks even more than before and I see a greater value in public space than I had before.

When do you estimate you’ll finish the final logo?

I thought I could do one logo a day or more and be done in a about a year. Ha, that was never going to happen. It will be a year this August and I anticipate I will still have around a hundred logos left to create.

Any plans or thoughts for future projects?

Oh, so many plans! My sketchbooks are filled with studies in typography and nature. I’ve been wanting to spend more time getting my hands dirty and less time in front of the computer.