The Life of the Lady Beetle

A little less than a month ago I noticed something interesting in the clover on my balcony. Along with the problematic aphids, I now saw a few small, black insects. They were clustered together and upon further inspection I found egg casings, which looked like tissue paper. I suspected these little alligator-like insects were lady beetle larvae, but they didn’t have any orange markings yet, probably because they had just hatched. Over the next few weeks I watched them eat aphids and was fascinated by their fast growth. Soon they developed orange sides and then I knew they were lady beetle larvae. I soon found many black and clear skins left behind on clover leaves from their various instars as they grew larger.

About ten days later they seemed to disperse from the clover and started wandering up the balcony railing and over surrounding plant containers. For hours they would sit before retreating to the clover at night. Eventually they found locations where they would attach their abdomen to the chosen surface and hang until turning into pupae. Only once I happened to see as the larva was in the process of turning into a pupa. It was a bright, almost florescent orange before quickly turning dark orange with black spots. Within a few days they had all picked their place and had turned into pupae. Some were on the clover leaves or on a fern next to the clover and some were on the outside of plant containers while a few picked places on the balcony railing.

Another ten days later and the first pupa started to wiggle about and as I watched during the day it continued to wiggle. Then it started to break out of the end, head-first and struggle free. About a half an hour later the adult lady beetle emerged, bright orange, shiny and spotless. It didn’t go far immediately, but as dusk came it moved to a more sheltered place at the top of the railing and there I could see it with wings stretched out from under the wing case. By the next day it was a dark orange with the black spots.

Over the next few days many more emerged, most the time unseen, leaving behind an empty pupae skin and an adult lady beetle nearby. They have yet to all emerge and I’m still finding pupae or empty pupae where I hadn’t noticed them before. While some seem to have dispersed, there are a number still here which have now started to eat the aphids.

It’s really quite amazing to me that all of this happened on my small balcony in the middle of the city just because I happened to put some clover seeds in a couple of containers a few months ago. Despite being what most people would consider a non wildlife-friendly place, I have a little ecosystem in the middle of the city. The life on my balcony has been amazing, especially considering I’ve only lived here a year and only recently started putting plants and water out. Along with the lady beetles I’ve seen a variety of bees, hover flies, a regular hummingbird, a resident jumping spider, other various spiders and many other small insects and flies. I’ve had a crow land once and pigeons as well. I look forward to what I will find next as I continue adding plants, wood, water and other habitat elements.

View photos of the lady beetles from my balcony here: Life of the Lady Beetle

There are more than 400 different species of lady beetles in North America and a single lady beetle can eat as many as 5,000 aphids during its lifetime. Aphids aren’t the only thing they’ll eat, also on the menu are the eggs of various moths, beetles and other insects as well as pollen and nectar. The various species vary in color, some are orange, yellow and even black and have different or no markings.

Lady beetles can lay as many as 50 eggs at a time but during their lifetime can lay upwards of 1,000. Luckily for the aphids on my balcony there were only about 20 eggs laid. Lady beetles go through a complete metamorphosis, which involves egg, larva, pupa and adult. The life cycle of my lady beetles seems pretty textbook.

To attract lady beetles, certain plants with abundant pollen and nectar can help such as yarrow, roses, marigold, dill, asters and daises. From my experience, clover could also be added to that list. Debris including leaves, branches and bark accumulated into a pile can also help in attracting them by giving them somewhere to overwinter. Hedgerows are also known to attract gatherings of lady beetles for overwintering. Needless to say, no pesticide use is important for attracting lady beetles because they also can be killed with the pests. 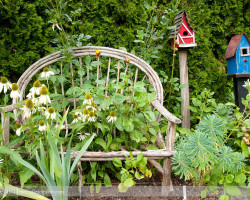