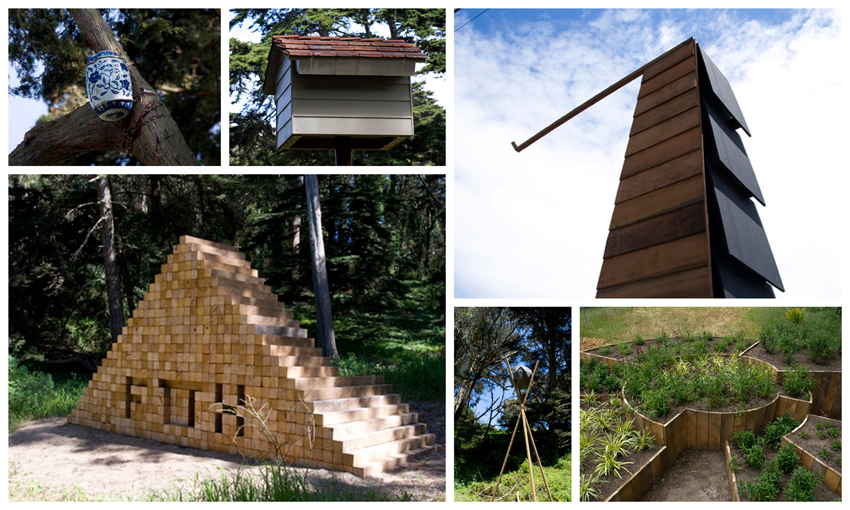 Running now through May 15th of 2011 is Presidio Habitats in San Francisco. It is a joint venture between FOR-SITE Foundation and Presidio Trust and started running May 16th of this year. The Presidio has a long and interesting military history starting in 1776 with occupation under Spain followed by Mexico and finally the United States up until 1994. It is now a 1,491 acre national park with the Presidio now a National Historic Landmark District comprised of 469 historic buildings. The historic landscape is also part of the National Historic Landmark District and includes a historic forest which was army planted, transforming the dunes into a 300 acre forest.  Today Presidio is valuable wildlife habitat in the city and is home to many species of insects, reptiles and amphibians and bats and small mammals and as many as 200 bird species, as you can see from the video below. Despite the number of species now, the Presidio is also known for a more tragic story of wildlife, being the last place the now-extinct Xerces Blue butterfly was ever seen.

The Presidio Habitats exhibition was launched in 2009 with the international invitation of artists, architects and other design professionals to submit proposals for wildlife species traditionally found in the Presidio. Eleven were selected out of 25 to be installed for a year in the park. The tour begins with the exhibition pavilion, a construction out of three reclaimed shipping containers “arranged at 120 degrees around a central atrium.” The first of the artwork is ‘Where is the Hare’ by sculpture and performance artist Nathan Lynch and features the Black-tailed Jackrabbit which is currently absent from the park. The art installation is “an imaginary footrace intended to appeal to the hare’s mythologically well-documented sense of pride in its own dexterity and speed.” Another past inhabitant of the park was of course a turtle, the Western Pond Turtle specifically.

‘Patience’ is a creative installation involving 10 solitary chairs placed in strategic locations by Jensen Architects. The animal central to this one is the Great Blue Heron, which is still regularly seen at the park. “An observer who sits in a chair experiences thephenomenon that informed its placement: an acute awareness of thetopography and world under the grasses; the relationship of the sky tothe light reflecting off the parade ground; and an unexpected view ofthe landscape.” I think this would be an amazing experience, the idea of gaining the perspective of an animal is intriguing. 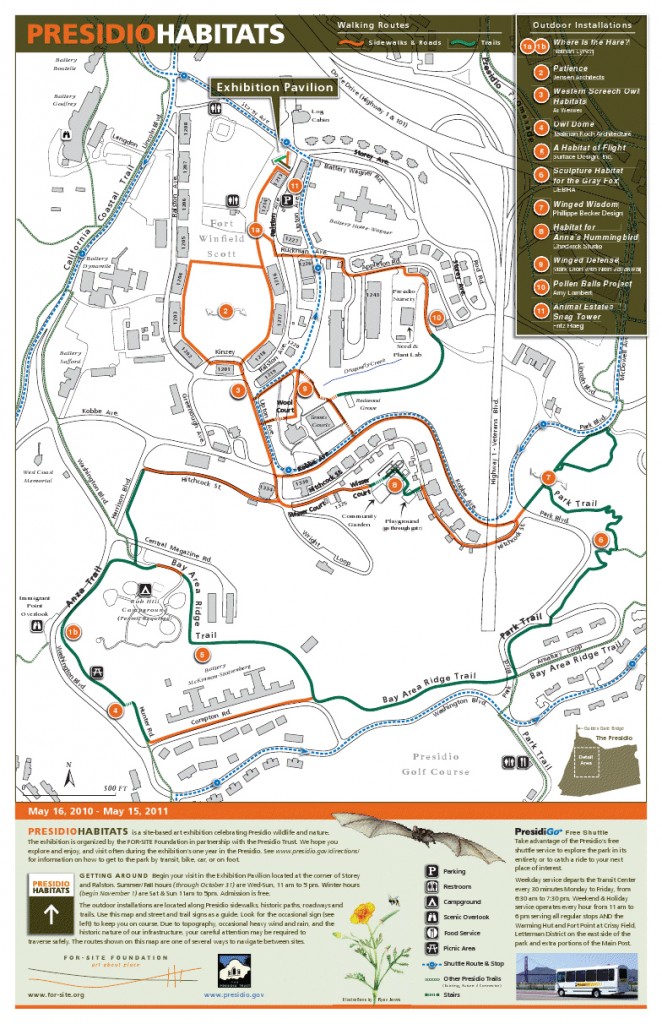 ‘Owl Dome’ is another, fascinating work focused on nesting cavities for the Western Screech-Owl by Taalman Koch Architecture. It’s a fascinating sculptural piece that on the inside represents the inside of a tree cavity, but on the outside looks like modern art. The frame “merges the vernaculars of tepeeand geodesic dome structures” and is 16 feet high, protected from the elements and predators and provides a hunting platform. The support is wrapped in hemp rope to give the fledglings a good grip.

‘Sculpture Habitat for the Gray Fox’ is another sculptural habitat piece by Danish artist CEBRA, this time providing a den. It’s a very attractive piece and it “consists of more than 350 stacked, interlocking wood components and a central cavity or fox den.”

‘Habitat for Anna’s Hummingbird’ is less sculptural, yet still artistic, created by Chadwick Studios. The circular, elevated planter represents the various cycles of the hummingbird including breeding, migrating and molting. The design was based on a diagram of these cycles from the Cornell Lab of Ornithology. Native flowering plants were set in the beds to provide food for the hummingbird.

‘Winged Defense’ by artist Mark Dion and architect Nitin Jayaswal features a bat structure for the Mexican Free-tailed Bat. The construction of the structure draws from the historic military structures in the park, even using materials such as terra-cotta roof tiles salvaged from past buildings.

‘Animal Estates Snag Tower’ is a brilliant work by Animal Estates creator Fritz Haeg. The original prototype structure was on display in Portland as part of the Animal Estates exhibition in 2008. The tower is designed for six different species including the Black Phoebe, Yuma Myotis bat, Pygmy Nuthatch, California Slender Salamander, Coast Garter Snake and Bumblebee. Nesting is provided for the nuthatch and bumblebee, a perch for the phoebe, crevices for the bat, cover logs for the salamander and hibernaculum for the snake.

Among some of the other installations are ‘Pollen Balls Project’ which creates stories for digger bees on wax pollen balls and placed in the parks nursery. Also displayed is ‘Winged Wisdom’ a series of letters featuring the wisdom of the Robin, filled with straw to provide nesting materials. ‘A Habitat of Flight’ is a sculptural piece which expresses the behavior of the Red-tailed Hawk.

I always get very excited about sculptural habitat structures because I think it’s a phenomenal way to provide habitat while at the same time integrating an artistic element that brings a sense of design to landscapes. These projects also bring an incredible awareness about the wildlife living with us in a way that traditional nest boxes and signs just can’t do. The recent post about Sculptural Bat Structures discusses much the same ideas and I’m happy to see more and more of these collaborative projects emerging. Also see Wildlife Hi-Rise, Beyond the Hive Results and the Foragings post which featured the Spontaneous City in the Tree of Heaven project for more about sculptural habitat.

Presidio video about songbirds below:

The Beautiful Wildlife Garden Blog features a guest post by myself today titled "Be a Citizen Scientist in Your Wildlife Garden". Head over and check it out and while you're there, browse through the many other excellent posts about wildlife

Wild Nights: Nature Returns to the City, by Anne Matthews is one of those books that I both liked and disliked. It's full of excellent observations of city wildlife, but there are no footnotes, no bibliography and no references. Without