What’s in a Name?

Just what exactly is in a name of our flora and fauna? Quite a bit as it happens. I’ve long been very interested in the names of things. My first trip outside of the country was to Finland where I bought my first foreign language bird guide. I had a great time looking through the book and learning the Finnish names of the various birds I spotted. Later as I traveled to other countries, I bought bird guides in the local language, in part to look at the names of birds in that country.

Even before my Finland trip though, I learned a lot about local species and their names from the people I was around. What I didn’t understand at the time was that many of those names were regional, or old-fashioned names. I learned many of those names and when my family started officially bird watching we got our own guide books and learned the ‘proper’ common names of birds. Instead of a ‘Camp Robber’, the bird that always stole food from our picnic table was now a ‘Gray Jay’. And the bird with the distinct twanging call was certainly not the ‘Rubber Band Bird’ as we liked to call it, but a Common Yellowthroat.  To me it was a little sad that these names were defined as wrong by the powers that be. I still get sad when even the official common bird names officially change. Goodbye to the Rufus-sided Towhee and Red-shafted Flicker.

So when I discovered the beauty of the variety of common names in other countries I was thrilled to readdress this topic. It felt that by being a ‘proper’ bird watcher, the cultural, regional and even personal names of birds were disregarded in favor of the official common names.

Unlike common names, official or otherwise, the scientific names for species are the same no matter what country you’re in. For this reason the Latin names are very important and valuable. They even tell us a lot about a species with just the name starting with what genus it’s in and in turn what other species it’s similar to. Sometimes the scientific name can tell us who first discovered or described the species which reveals a little history to us. For example the Douglas Fir is Pseudotsuga menziesii, and the second half of the name comes from Scottish naturalist Archibald Menzies, a surgeon and naturalist who accompanied George Vancouver’s expedition to the Pacific Northwest and the person who first described the tree. Names often also describe the species. To use our example again, Pseudotsuga means false hemlock, which implies that this tree has qualities of the hemlock which cause it to be mis-categorized or identified wrongly.

Plants and animals both carry stories and information in their Latin names such as with Carduelis pinus, the Pine Siskin. By the Carduelis, we know the Pine Siskin is in the same group as goldfinches and redpolls while the second half pinus describes the tree where the bird often nests. Meanwhile the Pipilo maculatus, or Spotted Towhee can teach us a little bit of Latin. Pipilo means to chirp or peep and manculatus means spotted. Streptopelia decaocto, the Eurasian Collared-Dove is named decaocto, which means 18 after a Greek folktale of a servant girl who only earned eighteen pieces in an entire year. The gods answered her prayers to be released from her position by turning her into a dove that called “decaocto” so that everyone would know her sad tale. Despite being the scientific names and using a dead language these names actually are quite interesting in themselves and can also be cultural.

Common names likewise often describe a species or tell a story. For example the American Bittern was sometimes known as “belcher-squelchers” in reference to their calls or the Chickadee, another name describing their calls. The name loon comes to us from Scandinavian lom meaning “lame” which described their helplessness when on land. Some common names are even derived from Latin names such as the Osprey which comes from ossifragus, meaning “bone breaker”. Sometimes the names are adapted from other languages such as Owl, which came from the old English ule which described their calls.

Many countries not only have their own name for species, but even different regions throughout a country have different names. For example in Ireland the Robin had English names of Christmas Bird, God’s Bird, Redbreast and Ruddock. In Irish it was known as the Broinn-dearg (red breast) in Counties Antrim and Donegal, Spideog Mhuir (the Virgin Mary’s Robin) in County Kerry and Spiordóg in County Dingle. Likewise the Robin was also known as Redbreast and Ruddock throughout England while the name Robinet was used in West Yorkshire and Lancashire.

Throughout Europe the Robin has many names starting with Robin in the U.K. In Scotland the Robin is Am Brù-Dhearg in Gaelic while in Wales it’s known as the Robin Goch. In Finland it’s the Punarinta, which means red breast while in the Czech Republic it’s the Červenka obecná, in Slovakia it’s the Slávik Červienka and in Germany the Rotkehlchen. The scientific name for the Robin is Erithacus rubecula, the first half is from the Greek word erithakos meaning “solitary” and the second half is Latin for “little red one”.

So the next time you think about a local bird or plant, think about the name and what it means and perhaps where it came from.

Please share if you have a particular memory of a local name or a name you yourself applied to a certain species. 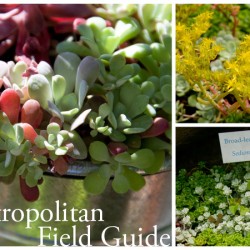 While you may not always associate succulents with cool, temperate climates, the Pacific Northwest has several native sedums which live and thrive in exactly those conditions. The Broad-leaved stonecrop (Sedum spathulifolium) is one of those succulents which grows only on

Summer Wildlife on the Balcony Habitat

City Balcony Wildlife This past summer produced a large number of wildlife species on my city balcony. I've briefly written about my balcony in the past, but this year I had more plants, the older ones were