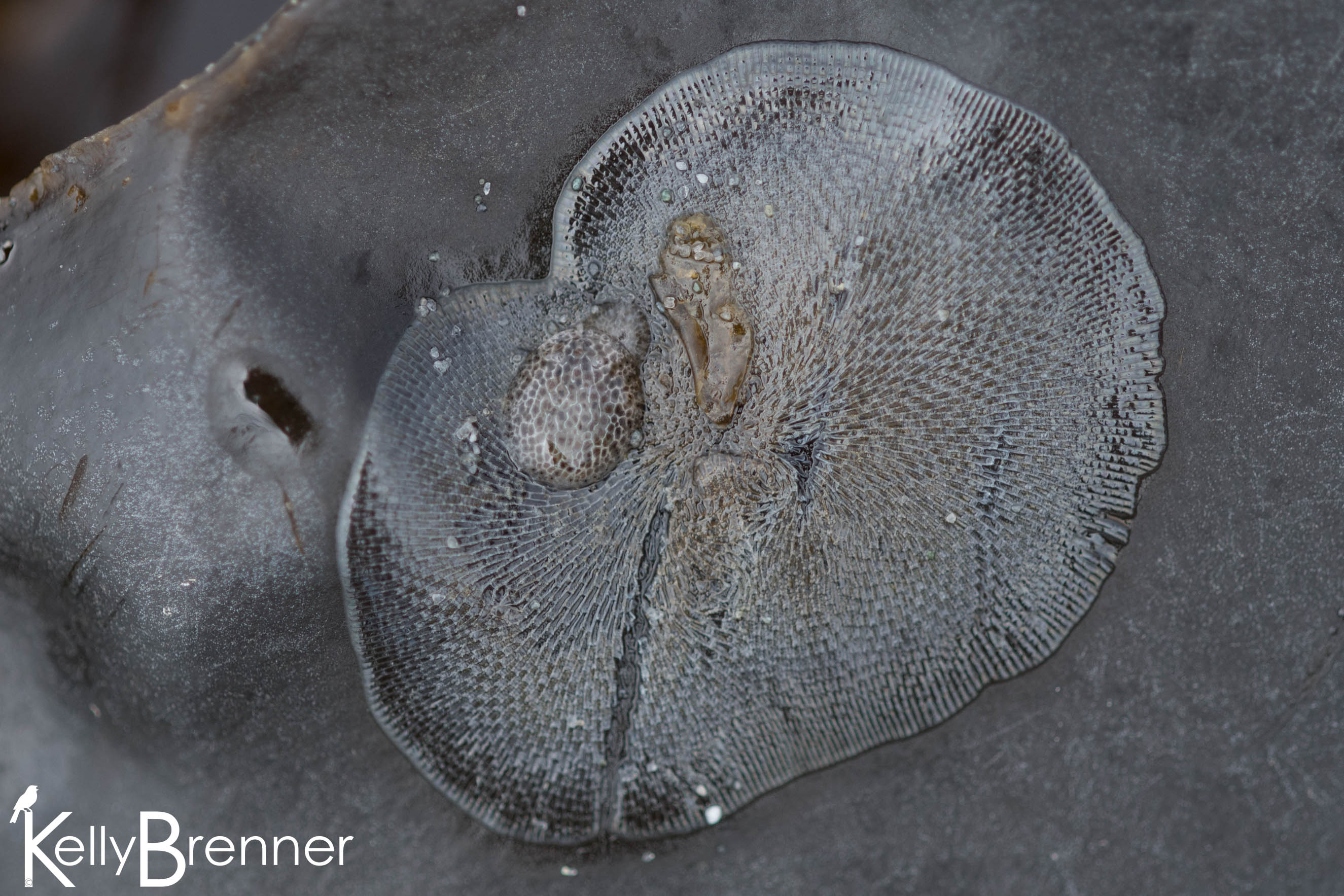 Last week produced some of the lowest tides of the year and I spent two days exploring at Alki Beach in West Seattle. The first day I investigated the rocky area and some eelgrass beds on the south end of the beach and the second day I spent on the north end of the beach looking around under rocks and over sandy areas. One thing was common in both areas, Opalescent Nudibranchs. On the north end of the beach I found a couple dozen under various rocks, some of them with their stringy mass of eggs. Their eggs are very similar to the Shaggy Mouse Nudibranch, but sea slug eggs can be very different. Some are flattened against the rocks, laid out in white threads which make a complicated matrix. Others are like very wide yellow ribbons loosely piled against the rocks. The one thing they have in common, of the ones I’ve seen, is if you look closely, they’re made up of tiny, intricate dots, each an individual egg. 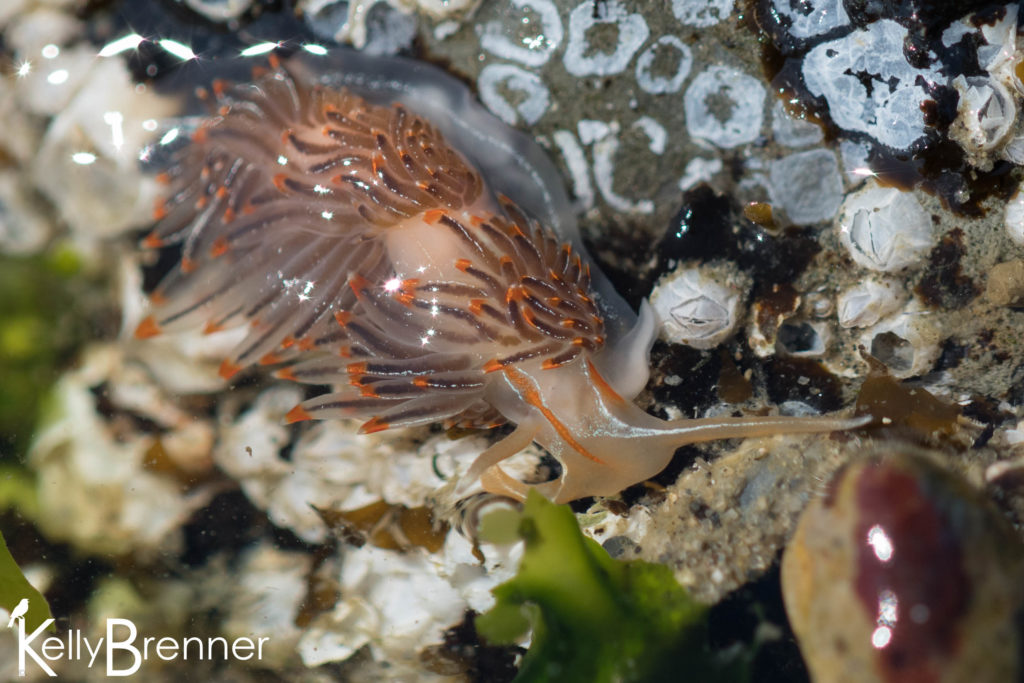 Opalescent Nudibranchs were not the only sea slugs I saw, there were just as many, if not more, Barnacle-eating Dorids under rocks. Under one particular rock I found a group of one Opalescent Nudibranch and three Barnacle-eating Dorids, with the eggs from the Opalescent. Last week was my first time finding the eggs of the Barnacle-eating Dorid though. These tiny slugs are easy to miss. They are oval in shape and quite small, the largest I’ve seen is no more than half an inch long. Their coloration is browns with varying shades covering their body in dots. Their eggs were not quite as organized as the other species I’ve seen, instead looking more like a gelatinous blob.

As we turned over rocks and looked under sea weed, we found many rocks absolutely covered in flatworms. These are very easy to miss because they are so flat they appear to be part of the rock and their mottled brown coloration helps them blend in. But as soon as a rock is exposed to the sunlight, they start immediately moving away from the light and if you hold the rock long enough, they’ll all have slid away to the other side. If you look at them closely, they have two lighter colored circles on their head and inside are a group of black spots arranged in a circle. It gives them the appearance of a cartoon character, but these are their eyes and are very basic.

We found many of the usual tidal zone denizens like sea anemones during low tide and among the many crab species there were red rock, kelp, decorator, shore and many hermits. Among the rocks on the southern end of the beach we saw a lot of sea stars including four sunflower stars, a couple blood stars, mottled stars and many ochre stars. Out over the water Osprey and Caspian Terns fished.

There were also quite a few sea lemons we saw. One, I believe, was a Monterey Sea Lemon and the rest were Sea Lemons. I had noticed quite a lot of beautiful, lacy circles of bryozoans on the kelp and Jen, one of the beach naturalists, found me later to show me a Cryptic Nudibranch. They are tiny and perfectly match the white lace-like appearance of the bryozoans on which they feed. Not far away, on the same kelp, I noticed something else on the bryozoans, the Cryptic Nudibranch’s eggs. 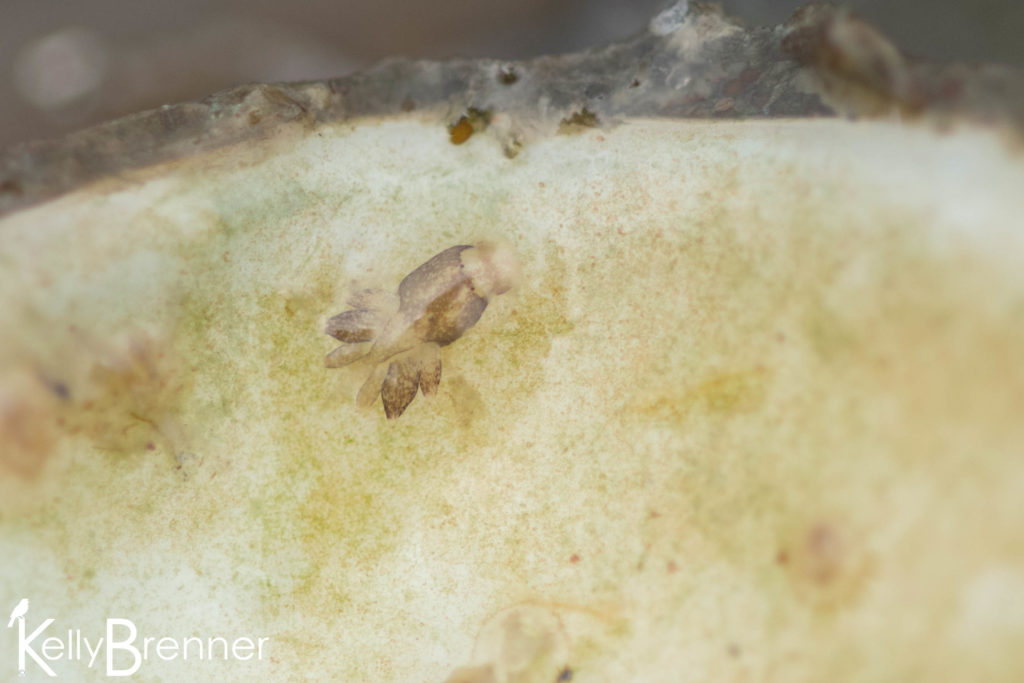 It was at the end of the first day I made my most exciting discovery. In an empty clam shell, through my hand lens, I saw the tiniest little creature sliding across the surface. I pulled the hand lens away and could only just make out the animal with my bare eye. I put it back again and my instincts told me it was a nudibranch, but it was no more than 3-4mm long. It was a brown, similar in color to the Barnacle-eating Dorids, but the shape was different. It had three cerata, sausage-like projections, out the backside, on each side. Near the head were two tiny black dots, like eyes. I posted it on Twitter and quickly learned it was a Hansine Seaslug (Olea hansineensis). This tiny animal feeds on the egg masses of other sea slugs.