How to Go Pond Dipping

When we gaze at a pond we may notice the Red-winged Blackbirds in the cattails, or the frogs singing in the shallows, but how often do we consider what is living in the depths?

There is an entire world living beneath the surface of every pond but we don’t have to put on scuba gear to find out what’s going on down there. Pond dipping is an easy and really fun activity (not just for kids) that can be done all year round. Spring and summer will produce the most wildlife, but even in the cold months, invertebrates like dragonflies are still living down in the depths of the pond, even under a layer of ice.

Finding invertebrates in a pond is easy and you need very little to get started pond dipping.

NET: The only thing you might not already have at home is a net, but one can be found for low cost. The net I most commonly use is a simple aquarium net that I found at the thrift store. These are perfect for pond dipping around the edges of a pond. If you want to get deeper or further out, look for a net with a longer handle. You’ll want a fairly densely woven mesh so the small invertebrates don’t escape through the holes. If you’re handy, you can even make your own. If you want to go all out, entomological supply stores carry special aquatic invertebrate nets for catching invertebrates.

CONTAINERS: You’ll need something to put your invertebrates in to watch or take photos. Any shallow container, preferably with a flat bottom can work. White makes it easiest to see the invertebrates. Again, I found some containers from a thrift store, one is a square, plastic container. Ice cube trays are also useful for putting individual invertebrates in for observation or organizing. I also like to have a large, clear petri dish that I can shine a light underneath, like a microscope, to view the insides of some invertebrates like water fleas or mayfly larvae.

MAGNIFYING GLASS: Once you find invertebrates, a hand loupe or magnifying glass can help you view them much better and reveal many details, like the gills of mayfly larvae, or the eyes of a diving beetle larva.

MICROSCOPE: If you live near a pond, you can take a jar of pond water home to view under the microscope. There are many smaller organisms like diatoms and ciliates that are only visible with a microscope. Just be sure to return the water to the original pond when you’re done.

FIND A POND: You don’t need to look for a pristine, mountain pond to find invertebrates, any body of water will have something. I am lucky to have my own backyard pond, but I’ve dipped in concrete ponds and other urban waterways with success. Literally, any water you encounter will have something living in it.

FILL YOUR CONTAINER: Scoop up some of the pond water into your viewing container and set it aside. Make sure it’s not in the sun if possible so the shallow water doesn’t heat up too much.

DIP YOUR NET: It’s really as easy as that. Use your net and sweep it along the edges of the pond. If there is aquatic vegetation, sweep among that to find damselfly larvae and other invertebrates hiding in it. Open water can yield water fleas and diving beetles. Surface algae is also a great place to look. Scoop out a handful and pick through it slowly to find all manner of invertebrates. It can be hard to scoop slimy algae with a net, so sometimes I use a small rake in my own pond.

Try not to scoop up the substrate of the pond’s bottom with your net because the mud or rocks won’t filter through the mesh and it won’t be able to drain.

EMPTY NET: Hold the net over your container and turn it inside out. Dip it into the water to wash off any invertebrates from the net into the container. If you want to move individual invertebrates into an ice cube tray to separate them, you can use a spoon. For smaller organisms, a pipette will work well.

VIEW: Time to observe! Many organisms will quickly become obvious as they move and try to find shelter. Others will lurk and you may have to sift around to encounter them.

There is a large variety of pond life you may encounter during your pond dipping depending on where you live. Here are some of the more common organisms. There are, of course, many, many more like diving beetles (both larvae and adults), damselflies, clams, snails, scuds, mayflies, caddisflies and stoneflies that you can learn about in the recommended resources at the end.

One of the fiercest predators in a pond, the dragonfly larva will eat anything it can catch. Some lie in wait, others actively hunt, but all are deadly. They have an explosive lower lip called a labium that is held shut until they find prey. Then the mechanism holding the labium shut is released and the jaw shoots outwards at incredible speed while palpi, which are like hooks, grab the prey and pull it back in to the dragon’s mouth. Some dragonfly larvae swim, but most crawl along in plants, algae or on the pond’s bottom.

Dragonfly and damselfly larvae are similar, but dragons tend to be rounder and more squat while damsels are long and slender and have three gills at the end of their backsides which resemble feathers.

One of the few arachnids found in water, water mites swim around beneath the surface of freshwater and live entirely in the water. There are about 1,500 species, but most have similar biology and live near the bottom of shallow water bodies. Most can swim and some may crawl on plants or along the substrate. Nearly all are predators, hunting fly larvae and other small aquatic invertebrates. Some are parasites as early stage larvae. Water mites have an incredibly complex life history that is too long to explain here, but worth learning about.

Very similar to water boatmen who swim face down, backswimmers, as their name implies, swim near the surface of freshwater on their backs using their long, hairy legs to row themselves through the water. They are predators and will consume anything they can catch, usually insects and crustaceans, but also small tadpoles. They have piercing mouthparts they use to pierce and suck out the insides of their prey. Although they may not look like it, they are strong fliers and will disperse to search out new ponds to colonize.

Related to jellyfish, these small creatures have amazing powers, despite being fairly simple organisms. Their stinging tentacles grab passing water fleas or other small organisms, harpooning them with toxins, and then swallows them whole. Hydra reproduce by budding, essentially growing a small clone of themselves from their body. Eventually it breaks off and goes on its own way.

The larvae of some non-biting midges burrow, but most of them weave tubes out of silk they produce and the midge can often be seen through these fine cases. Midge larvae are herbivores and consume organic matter. They are very common but varied and come in many different colors. At first glance they resemble worms, but they actually have tiny prolegs at both ends of their bodies.

Skating along on the pond’s surface, water striders are specially adapted to use water tension to walk on water. They have four long legs, and two smaller ones that are tucked up under their heads. They are predators and detect prey by sensing vibrations on the water with their legs. They will eat any other invertebrates they encounter at the surface, alive or dead, and will even prey on other water striders.

Water fleas make the freshwater world go round. They are the base of the food web and nearly everything starts with them. But they are interesting on their own. Females can produce young every 3-4 days, from one to one hundred at a time. And they can do so by parthenogenesis, without a male.

There are many excellent books that will help you learn about and identify what you find in your pond. Here are a few of my favorites. 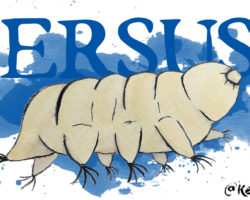 I am happy to present the second edition of my highly unbiased and scientific infographic comparing invertebrates and vertebrates who share names. This time I looked at water bears, also known as tardigrades, and brown bears. Here was the first: 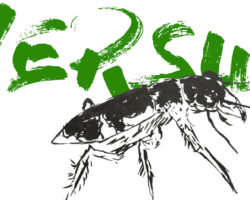 I present the first in what will hopefully be a series of highly unbiased and scientific infographics comparing invertebrates and vertebrates who share a common name. In this first edition I look at the mighty Tiger Beetle and compare it